Indian-British sculptor Anish Kapoor is renowned for his works that transform environments and promote self-reflection. From huge, overwhelming structures that fill entire rooms to provocative installations that invite deep thought, Kapoor’s art wouldn’t be the same without the participation of the viewer.  “To a large extent, all the work is incomplete,” he explains. “It’s completed by the person who is looking at it. That relationship is what makes it whole.”

Through exploring form, material, and color, Kapoor challenges how we perceive reality. Read on to discover the stories behind five of his famous artworks.

Here are five Anish Kapoor artworks you should know.

Kapoor turns the world upside down with his Sky Mirror installation. The 20-foot-wide (6-meter-wide) concave dish with a polished, stainless steel surface points up towards the heavens and provides a porthole view of the ever-changing environment. By using reflective surfaces, Kapoor encourages viewers to reflect upon their surroundings and themselves. Sky Mirror also invites questions of reality and the permanence of life.

The original public sculpture was commissioned by the Nottingham Playhouse in England, but Kapoor also created a larger version. In 2006, he constructed a colossal 35-foot-wide (10 meter-wide) Sky Mirror at the Rockefeller Center in New York City.

Kapoor collaborated with artist and engineer Cecil Balmond to create Marsyas. The 492-foot-long (150-meter-long), 10-story-high sculpture was on view at Tate Modern gallery in London and was commissioned as part of the Unilever Series. The giant artwork was the third in a string of commissions for the Tate’s Turbine Hall and the first to make use of the entire space.

Marsyas references the ancient Greek satyr of the same name who played a double pipe instrument known as the aulos. The sculpture consists of red PVC canvas stretched over a steel framework to create a giant, double trumpet-shaped structure. Just as loud music demands attention, Kapoor’s huge red sculpture commands notice. Kapoor tried to visually emulate the effect of music by creating a piece on a huge scale. The artist explains, “Every idea has its scale. Marsyas wouldn’t be what it is if it were a third of the scale. The pyramids are the size they are because they are. Scale is a tool, a tool of sculpture.” 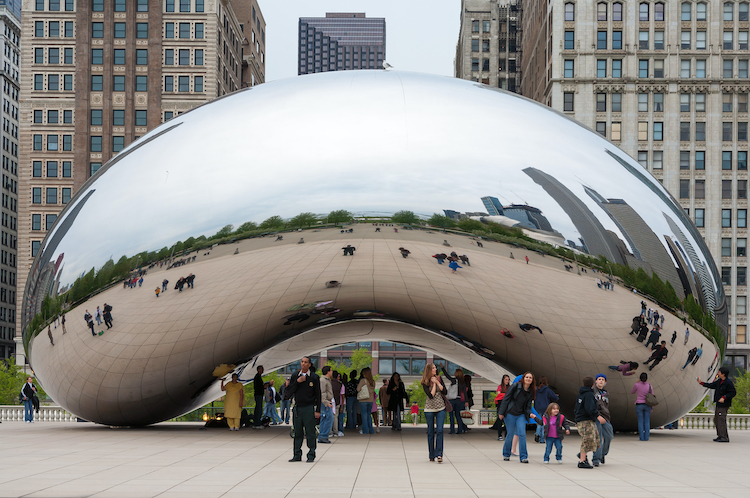 Continuing to explore the possibilities of reflective surfaces, Kapoor created Cloud Gate: a site-specific sculpture located in Millennium Park in Chicago. The massive piece measures 66 feet (20 meters) long and 33 feet (10 meters) high and features a 12-foot-tall (3.6-meter-tall) arch at its base. It comprises 168 stainless steel plates that have been seamlessly welded together to create the illusion of a single form. Visitors are encouraged to walk around and underneath the sculpture to observe the way it warps the reflection of themselves and the environment.

Because of its kidney shape, Cloud Gate has come to be affectionately known as The Bean. At first, Kapoor wasn’t a fan of the public-given nickname and called it “completely stupid.” However, over the years, the artist came to embrace the moniker. In 2017, when speaking about the public sculpture, he noted that “it’s great for it to have a colloquial name, its own lingo,” as it “has an ownership of its own.”

Kapoor once said “the act of making a mark is violent’’ and his Shooting Into the Corner piece certainly captures that sentiment. It consists of a pneumatic compressor constructed to resemble a cannon that loudly shoots 24-pound balls of red wax 50 mph across a room at 20-minute intervals. Intended to evoke human flesh, the red wax residue drips down the walls on impact, creating an accumulated puddle of “flesh” on the floor. The violent visualization is intended to unsettle the viewer and invite them to remember past and present world conflict.

Descension was first created for India’s Kochi-Muziris Biennale in 2014 and then constructed as a large outdoor version for his solo exhibition at Versailles in 2016. It features a giant, spinning whirlpool of black water that appears to spin into a seemingly bottomless pit. By manipulating an everyday material like water, Kapoor explores our preconceived assumptions of the physical world. “Descension destabilizes our experience of the solidity of the ground we stand on,” says Kochi-Muziris Biennale. “It builds on Kapoor’s concern with non-objects and with auto-generated form. In its state of flux and motion, Descension confronts us with a perpetual force and a downward pull into an unknowable interior.”

6 Ways to Have a Little Fun with Your Emails

How car UX design is leapfrogging into the future