Artist Ai Weiwei is undoubtedly the most well-known living Chinese creative today, but his country’s government doesn’t exactly give him the recognition he deserves. In communist China—where freedom of speech is tightly regulated—Ai’s varied portfolio of work doesn’t fetch the highest prices at auctions, and critics don’t sing his praises. Instead, the activist is viewed as a threat to the “harmonious society.” He has spent time in jail, been beaten by police, and is constantly under surveillance. He was even barred from leaving Beijing for a whole year in 2011. As a result, he has become an unsung hero and a symbol of the struggle for human rights in China.

From smashing an ancient vase to highlighting governmental corruption and negligence, Ai’s dramatic actions bridge the gap between art and societal issues. “Creativity is the power to reject the past, to change the status quo, and to seek new potential,” he says. “Simply put, aside from using one’s imagination—perhaps more importantly—creativity is the power to act.”

Through sculpture, film, installation, photography, and architecture—and across an array of materials including ceramics, marble, paint, and tea—Ai explores Chinese identity in the modern world as well as the culture’s social history. Read on to discover six of his most famous works.

Here are six key works from across Ai Weiwei’s career.

One of Ai’s earliest works titled Dropping a Han Dynasty Urn demonstrates the artist’s desire to provoke outrage and controversy. Just as the name suggests, Ai photographed himself smashing a 2,000-year-old ceremonial urn from the Han Dynasty (206 BCE–220 CE). The ancient artifact not only had considerable monetary worth, but it also had huge symbolic and cultural value. The Han dynasty is considered a defining moment in Chinese civilization, and the urn represents a part of history that was wiped out by Mao during the Cultural Revolution (1966-76).

During China’s Cultural Revolution, there was widespread destruction of antiquities as well as the dismantling of China’s old customs, habits, culture, and ideas. Ai’s deliberate and shocking act of destruction references this huge cultural shift and highlights how cultural values are created and destroyed. The artist was quoted saying, “General Mao used to tell us that we can only build a new world if we destroy the old one.” 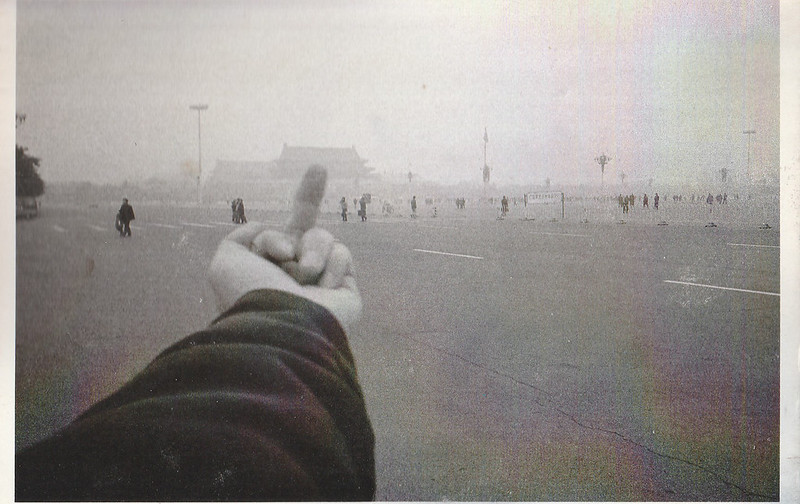 In this provocative snapshot, Ai sticks his middle finger up at Tiananmen Square Gate. The gate—also known as “Gate of Heavenly Peace”—is the former front entrance to the Forbidden City. It’s also the place where state soldiers shot and killed peaceful protesters in 1989. The Chinese government has never publicly acknowledged the brutal massacre and censors all footage and written records of the event.

Ai’s Study of Perspective Tiananmen Square is part of a series of photos taken between 1995 and 2017. In each photo, Ai uses the same offensive gesture to show his disdain for state power. He lifts his middle finger to significant institutions and monuments from around the world, including the Eiffel Tower in Paris, the Reichstag in Berlin, and the White House in Washington D.C. The series mimics tourists’ photos and invites viewers to question their acceptance of government authority.

When the police questioned Ai about this particular photo in 2011, the artist claimed he was rejecting “feudalism,” noting the gate had been built by a Ming Emperor. However, Ai’s single finger also represents a theme from recent history that his interrogators could not talk about. It mimics the image of “tank man”—one of the killed protestors from 1989 who was famously photographed facing a line of tanks.

For Ton of Tea, Ai compressed a ton of traditional pu’er tea leaves into the space of one cubic meter. In China, tea is still compressed into cubes, although much smaller in scale. Ai’s sculpture enlarges an everyday domestic item to create a form of a minimalist structure that looks like it could be made of metal. By choosing tea as his material—China’s oldest export—Ai references globalization, while the modern form of the cube calls attention to the future and the growing influence of Western culture.

Straight is Ai’s poignant response to the Sichuan earthquake of 2008. The devastating event left 90,000 people dead or missing, and sadly, over 5,000 children were killed when poorly constructed school buildings collapsed on top of them. The buildings were held up by steel rods that twisted and bent during the earthquake. Ai—a self-taught architect—was outraged to discover that the children’s deaths could have been avoided with better structures. He wanted the government to take responsibility.

Ai collected the broken steel bars from the earthquake site and began creating a memorial artwork. He commissioned metalworkers to straighten the bars so that they looked as they did before the earthquake. Ai then arranged the thousands of individual pieces—each of which represented a life lost—into a wave-like pattern that resembles the oscillations in an earthquake on a seismograph. It took Ai four years to complete this monumental floor sculpture that measures almost 40 feet long and 20 feet wide and weighs 200 tons. 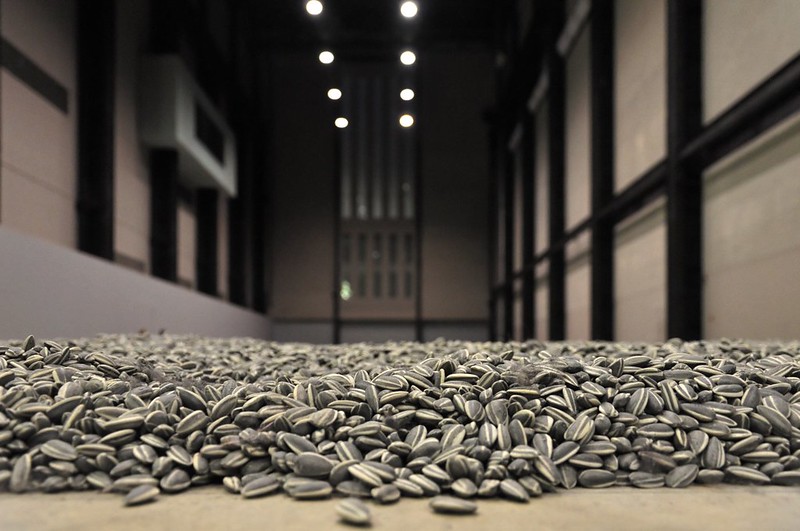 In 2011, 100 million faux sunflowers seeds were poured into the enormous Turbine Hall at Tate Modern. Each unique piece was handmade from porcelain in Jingdezhen, the Chinese town which once produced imperial porcelain for over 1,000 years. It took 1,600 artisans over two years to make the seeds. Each one was sculpted out of the kaolin clay from local mountains, hand-painted, and then fired at 1,300 degrees. Sunflower Seeds invites questions about the contemporary mass manufacturing practices in China. Many products are still made by hand because machines are expensive and human labor is cheap.

While the seeds were on display in London, Ai was arrested and detained without explanation by the Chinese authorities. 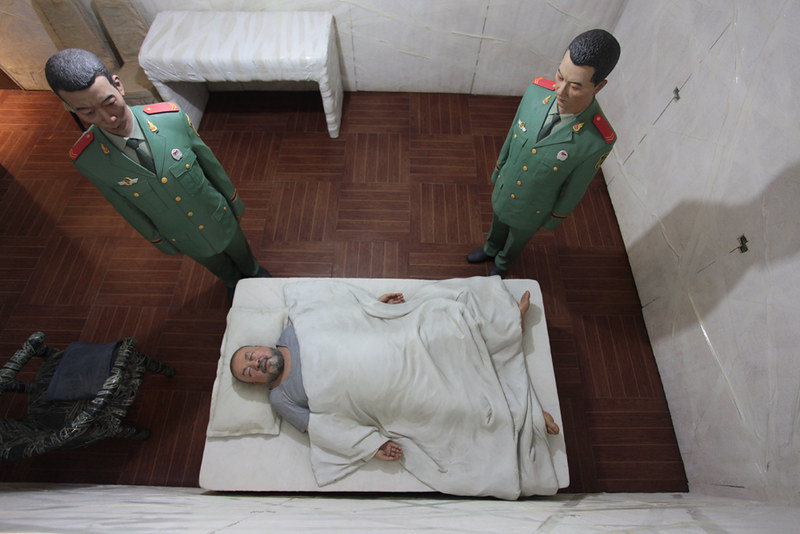 On Sunday, April 3, 2011, Ai was arrested at Beijing airport and illegally detained at a secret location for 81 days. He was watched over 24 hours a day by two guards who were forbidden to communicate with him. For S.A.C.R.E.D, Ai recreated every detail of his cell with six dioramas: Supper, Accusers, Cleansing, Ritual, Entropy, and Doubt.

Through windows in the metal façade of every shoulder-height “room,” viewers could peer into each scene—all of which were created in half the actual size of the real cell room. Ai populated the spaces with fiberglass figures of himself and the two guards, revealing their activities. The work gives a powerful insight into how grim and claustrophobic the detention experience was. The dioramas show how the guards stood close by Ai while he slept, ate, showered, and used the toilet, all the while leaving little to no room for personal space.

6 Facts About the Monumental Great Wall of China