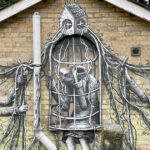 “A safe space to do risky things”: a Canadian design guide


When it comes to stereotypes, Canadians don’t do too badly. “Canada has a stereotype of being very nice and friendly – and that’s true – but the net benefit is that it’s a pretty safe space to do risky things,” designer Chris Braden says, pointing to the network of talent and social safety nets, as well a can-do attitude in the industry.

Braden co-founded Toronto-based design studio Public Address after working at Bruce Mau Design (founded by the leading Canadian designer) for a decade. Since then, Public Address has been involved in a range of projects, from creating the visual identity for the Los Angeles 2028 Olympics to travel start-ups. Braden says he relishes the studio’s “entrepreneurial” spirit – something echoed in the city’s start-up scene – which has a ripple effect in the studio’s work.

“The thing that’s cool about Canadian design is that you can’t point it out necessarily,” Braden believes. “I think that’s also true of Canadians as a whole, we kind of seamlessly fit in a lot of places without necessarily calling attention to ourselves.” It means that there’s no set expectation of what Canadian design should look like, Braden explains, which allows a sense of freedom and a client-base that skews international. Any “Canadian-ness of the design” is applied through a multi-perspective outlook, rather than aesthetics, Braden says.

How to avoid “tropes of Canadian design”

Take the branding for Cannoe, a Toronto-based seller of cannabis-based products. “We looked for ways to represent the attitude and diversity of Canada in a way that steered clear of the visual tropes of Canadian design,” Braden explains. The colour palette is simply green – no exact shade, but the entire spectrum.

Sean Carter, founder of Vancouver-based studio Carter Hales, believes the country’s geography has allowed for a diverse design landscape – with Canada’s capital Toronto as a global hotspot for design thanks to its concentration of corporate head offices. “Vancouver attracts a ton of creatives,” Carter says, “but we don’t have the same corporate and business infrastructure here that supports bigger city teams.” Carter explains that his team has been pushing against a “safeness” in local design in the city for the past decade. He now believes that local brands are finally realising this too, accelerated by the pandemic.

One branding project for a Vancouver-based company allowed Carter to indulge his lifelong interest – and distinctly Canadian pastime – of hockey. The identity for sports marketing and memorabilia company House of Hockey puts a modern spin on design from the ‘Original Six’ hockey teams from the early 1960s, Carter explains. The studio designed a custom typeface that has echoes from the “legendary” 1972 Canada-USSR Summit Series. “Using the rink as an icon, and the double-H for House of Hockey – it designed itself a little bit,” he says.

“Decolonisation is a huge movement here in Canada”

Five years ago, designer Greg Durrell launched Design Canada, a documentary which explored the country’s design history. According to the native designer and filmmaker, it was the first such exploration of Canada’s graphic scene, examining designs such as the logo for the Canadian National Railway and the country’s maple leaf flag.

The film marked the 150th anniversary since the country gained independence from Britain. “As a young designer myself I would have loved to have the resources to study the design of my own country, to learn about the pioneers of design from Canada,” Durrell told Design Week at the time. The documentary focused on the explosion of modernism in the 1960s, when “British ancestry roots” were done away with and an influx of immigrants lent an international styling to the design landscape.

Another story in Canada’s history that has become the focus of international attention is the treatment of its Indigenous people (an issue raised by both Carter and Braden). Hundreds of unmarked graves have been uncovered at sites in Canada, near sites of residential schools. Over the course of a century, over 150,000 Indigenous children were sent to these establishments. Reports of historic abuse are common.

The news has impacted all sectors of society, including design. “Decolonisation is a huge movement here in Canada,” Mark Rutledge says. Rutledge is an Indigenous graphic designer at digital studio Animikii and president of Graphic Designers of Canada (GDC). GDC was set up in 1956, and has sought to establish standards for the design industry throughout its history. Rutledge is currently based in Yukon, the westernmost point of Canada.

He describes his own route into design as full of “trials and tribulations”. During his career, Rutledge says he was one of a handful of Indigenous designers in the country, which made the landscape both hard to break into and navigate. Throughout the years, he’s seen an “evolution of design” in terms of diversity. “It’s no longer five, it’s hundreds of us,” he adds.

Rutledge says that there’s been a resurgence in advocacy on the GDC’s part in recent years, following a “lull” in the ‘80s and ‘90s. “Up until recently we were really quiet on that front,” Rutledge says. In July, Rutledge wrote an open letter to the National Gallery of Canada after the institution chosen an American studio for its rebrand – the first foray for him as elected president. “There are in abundance of 50,000 communication designers in Canada,” Rutledge wrote. “What shall I tell these tends of thousands of designers and the thousands that graduate with B. Des. (Bachelor of Design) degrees annually?”

Indigenous design is not a new issue. Design Week has covered it extensively, in country profiles of India, Australia and New Zealand, among others. At the Ontario College of Art & Design University (OCAD), based in Toronto, the design faculty is taking a nuanced and practical approach to the subject, its dean of design Dori Tunstall explains.

Tunstall worked in Australia before coming to OCAD in 2016 – where, as a black woman, she is a rarity among deans of design. Her approach – a result of collaboration with existing staff and cluster hires – is one of ‘respectful design’. According to Tunstall, this entails valuing different cultures, designing with empathy and responsibility, and also embedding Indigenous learning into the design process.

She hopes that the approach makes the students think about the kind of people they want to be, rather than simply their output. Practically, it means that the various courses are taught with a long-term vision. Graphic design is about “minimizing harm and emphasising the good we can do”, while industrial design focuses on products and processes that “take into account the next seven generations”, according to the university’s website. There are also industry-facing initiatives, such as a recent slew of real-world branding briefs set by Indigenous-owned businesses.

During her tenure, OCAD students have taken on the language of respectful design and made it their own, according to Tunstall. She points to a recent change at the one of the school’s biggest faculties, illustration. When Tunstall first attended the illustration showcase, she was trying to figure out which work had been created by black students. “I could not figure out from the work of the students, because of the pressure that they received from the faculty in terms of the projects they did,” she says. The focus was on commercial work that would speak to a majority white population, Tunstall explains.

Two years later, she says she can walk through the work and recognise designers’ identities upfront. “They’re dealing with significant themes within their communities and experiences,” she adds. One student’s work revolved around sugar in the slave trade – what might have been deemed as controversial thanks its depiction of black bodies. At the exhibition, those images were on full-size view. “To the student, respectful design meant ‘This is the work I want to do, this is the work I want to happen’”, Tunstall says. “Within a period of three years, to have that shift in the students’ understanding of their work, the faculty’s support of their work, is pretty tremendous.”

Evergreen Architecture: A New Book Explores Buildings That Place Nature at Their Core