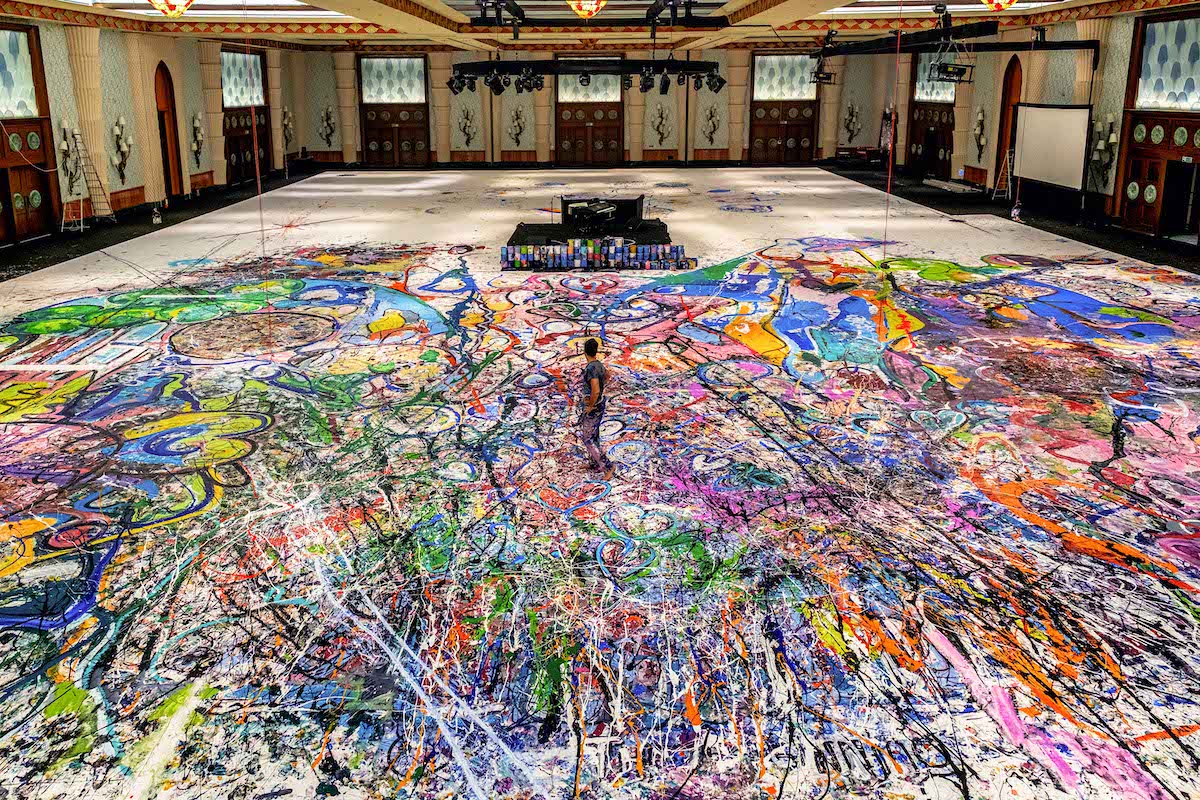 Artist Sacha Jafri is looking to make a big change in the world by using his art to raise funds for kids in need. Since March, he has been spending his COVID-19 lockdown at Atlantis The Palm in Dubai, where he has been working on what will be the world’s largest painting on canvas. Titled The Journey of Humanity, the immense artwork is part of his project Humanity Inspired and will be used to raise $30 million to fund health and education initiatives for children living in poverty.

Jafri is in the home stretch of his painting, which measures the size of two soccer fields, and is set to be completed shortly. Then, in November, it will be unveiled to the public at Atlantis The Palm and evaluated by the Guinness Book of World Records to certify that it is, indeed, the world’s largest painting on canvas. Subsequently, Jafri’s canvas will be cut into 60 smaller paintings and sold during a charity auction in December.

Jafri’s goal for the project is not only to raise funds to help children, but it is to connect one billion people worldwide in an effort to combat some of the devastating efforts that COVID-19 has had on the world’s poorest communities. By partnering with organizations like UNICEF, UNESCO, and UNHCR, he’s hoping to make a real impact on the lives of kids around the world.

We had the chance to speak with Jafri about his goals for the project and what it feels like to complete the world’s largest painting. Read on for My Modern Met’s exclusive interview. 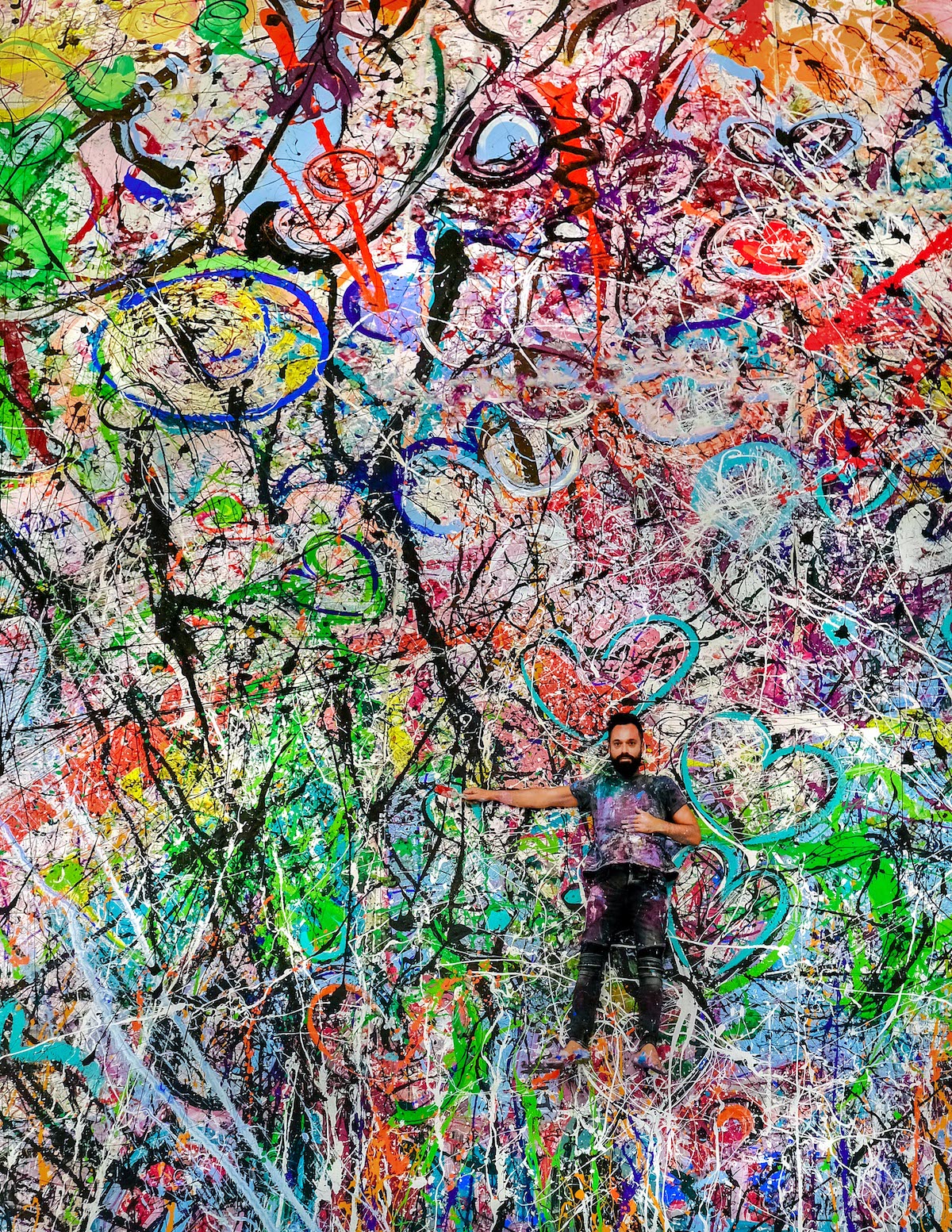 What was the driving force behind this project?

After a conversation with UNICEF earlier in the year, my eyes were opened to the fact that an estimated 385 million children live in extreme poverty around the world and these children are twice as likely to die in childhood. These numbers have almost doubled in the last four months due to the COVID-19 pandemic. This pandemic has affected every community across the globe and has taken the lives of thousands, but it has also changed our mindset, and this means we have a window of opportunity for change.

My initiative, Humanity Inspired, aims to be a catalyst for true societal change through the heart, minds, and souls of the children of the world—a springboard for a better future for all humanity. I aim to connect the world, and re-connect humanity to ourselves, each other, and ultimately the soul of the earth.

My painting The Journey of Humanity will support the delivery of improved education, healthcare, and connectivity, as well as create vital funds in support of the poorest and most desperately in need areas and regions of our planet. I hope that my ground-breaking creation will help to further advocate global logistical support for health and sanitation within the worst-hit refugee camps, slums, townships, shanties, favelas, and poverty-stricken communities of the world.

How did the relationship with UNESCO come about and what’s their role in the project?

Both UNESCO and UNICEF were brought to the project through his excellency Tariq Al Gurg. This has proved to be a very powerful and significant partnership along with the Global Gift Foundation, helping us to connect our world, raise $30 million, bring internet connection, and a newly developed education platform through the net to the poorest and most desperate, in-need children of our world and for the first time giving these children a very real chance for a new future and changing the world around them. 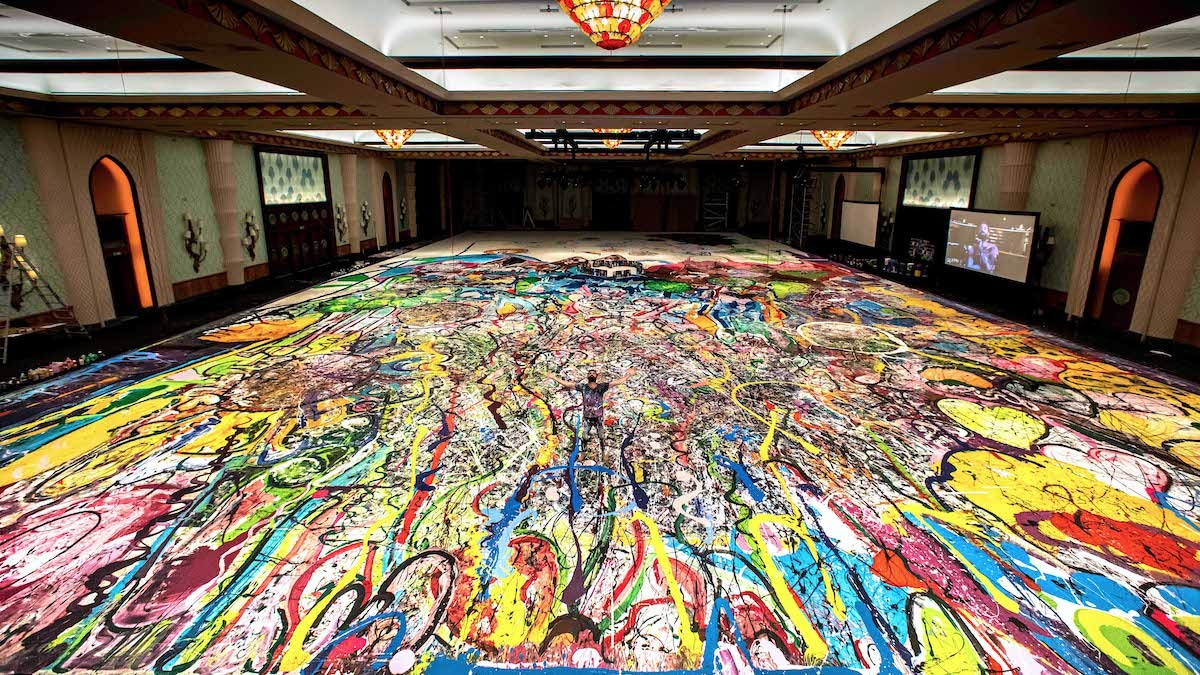 Did you ever imagine yourself creating the world’s largest painting?

Yes… I feel 25 years of my career as an artist and humanitarian have led me to this point.

Tackling something so large is a challenge just in terms of organizing the execution. How are you tackling the creative process on such a large scale?

Nothing has been planned, it has developed as it has gone along but after painting 16 to 17 hours a day for six months, surrendering to something greater than myself, something magical has started to happen.

The Journey of Humanity is our chance for a better future, to collectively paint the world a different color. I have approached this painting the same way as one of my normal size work of arts using brushes no more than two inches wide. This has resulted in 200 to 300 layers of paint and a strong narrative is beginning to come through the layers.

What’s an average day working on this project for you like?

Coffee, hug from my daughter, painting clothes on and I am ready to go.

Long days sometimes painting until the early hours of the morning.

Stay focused on the painting I am creating and our target of raising $30 million to help the poorest children of our world who are most desperately in need of our help. 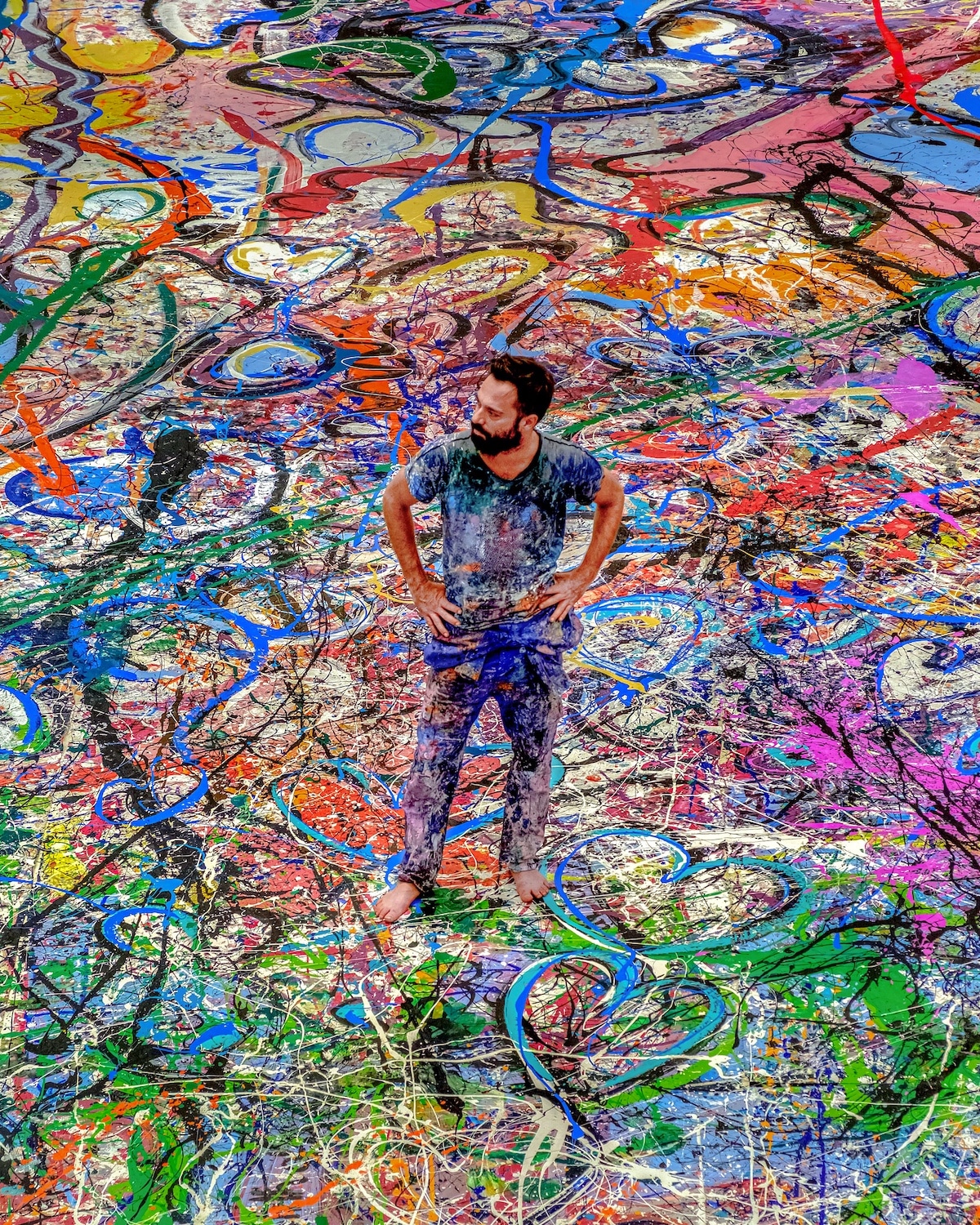 What do you hope that people take away from the work?

I want my work to act like an electric shock, to electrify our senses, and awaken something that is often asleep inside. I feel the most important thing we can do as adults is keep the child alive within us all. I hope my work will reconnect us to ourselves, each other, and ultimately “The Soul of the Earth”—making the mundane and over-familiar magical again, bringing the light from out of the darkness for a more hopeful, inspired, and energized future.

With my painting The Journey of Humanity I am aiming to connect our world, bringing us to a better future through the hearts, minds, and souls to the children of our world. I hope to do this through mark, shape, form, color, and narrative; always with the purest of energy and intentions.

The unveiling of the finished painting at Atlantis the Palm is in mid-November and then the royal gala dinner and charity auction where I will cut the painting into 60 panels. [I’m] aiming to raise $30 million for the poorest children of the world who desperately need our help. This is all set to become the largest social, artistic, and philanthropic project in history as well as the largest on-line auction and the most expensive work of art to be sold online. I look forward to helping make the world a better place through the success of this auction, thanks to our charitable partners, UNICEF, UNESCO, Dubai Cares, Global Gift Foundation, and Atlantis the Palm. 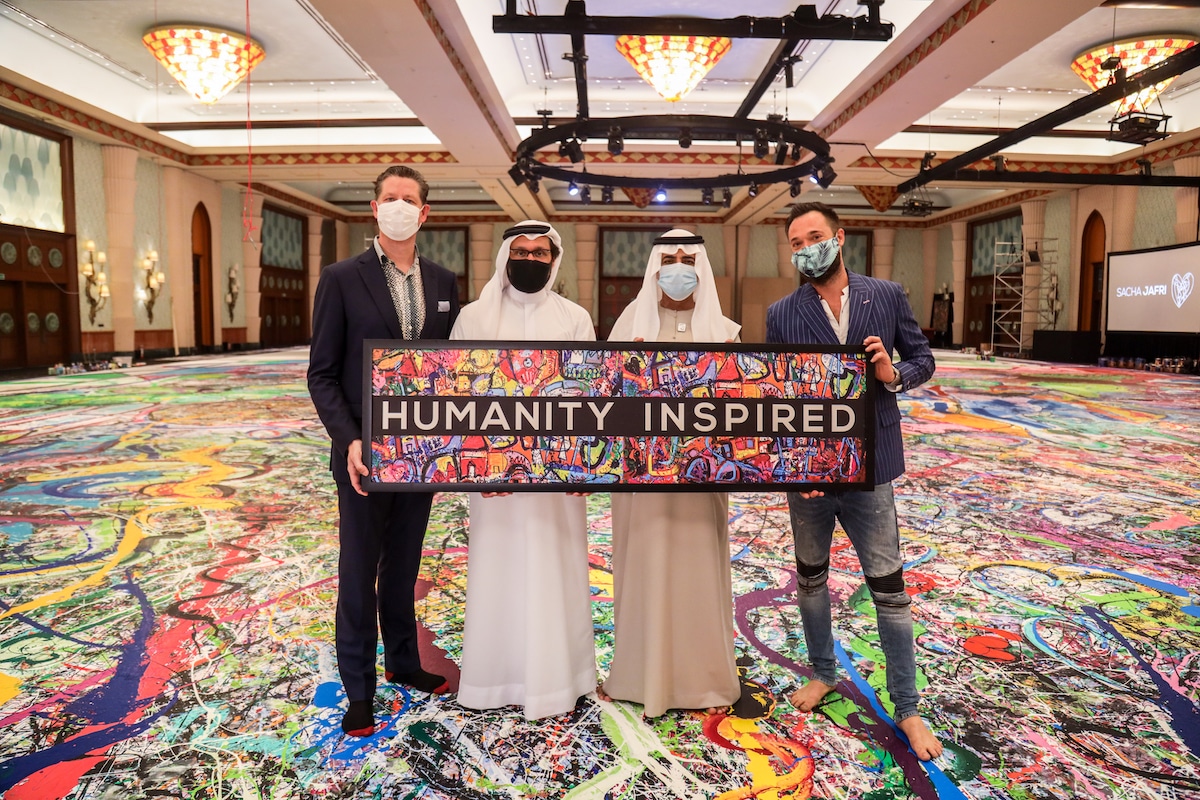 Street Artist Paints Giant Murals with Schoolchildren in Iraq and the U.S.

“We felt a responsibility to go ahead”: 5 minutes with LDF’s Ben Evans