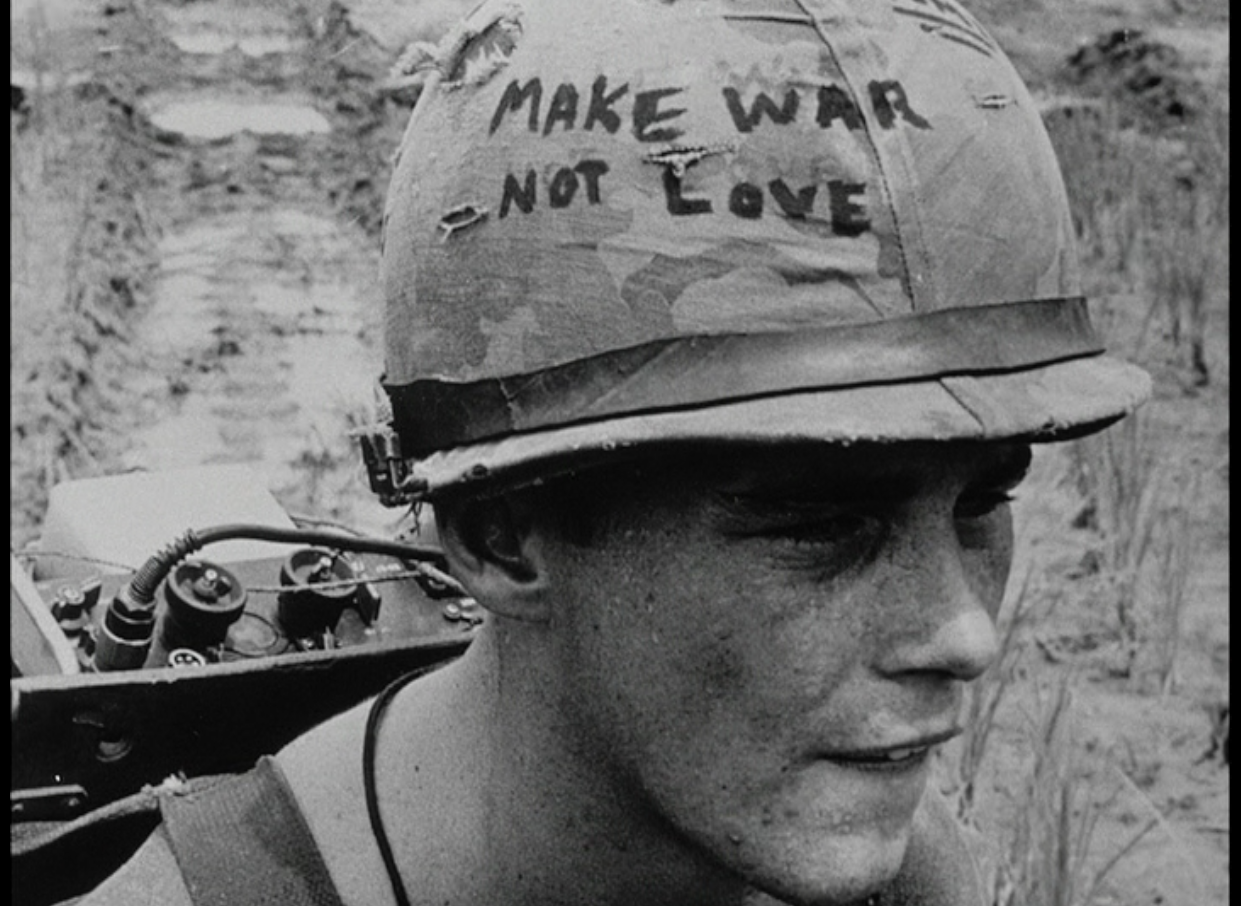 Film still from the 1968 documentary, In the Year of the Pig.

Artists responded to the Vietnam War through sculpture, paintings, and – yes even film. As a part of the public programming for Artists Respond: American Art and the Vietnam War, 1965-1975, our current exhibition, curator Melissa Ho chose three films (The Anderson Platoon, In the Year of the Pig, and North Star: Mark Di Suvero) to help further illuminate the complexities of various artistic actions around the war. The film screenings accompanying Artists Respond provide unique views into the lives of soldiers, artists, and first-hand documentation of the war. As portals into the past, these award-winning films are so much more than documentaries, they are truly works of art.

Dan Flavin, monument 4 for those who have been killed in ambush (to P. K. who reminded me about death), 1966, red fluorescent light, The Estate of Dan Flavin. © 2018 Stephen Flavin/Artists Rights Society (ARS), New York, Photo courtesy David Zwirner. Photo by Libby Weiler.

The Anderson Platoon (1967) was one of the first documentary films to ever follow a combat troop for six months through the rough terrain of the Vietnam jungle. What is most memorable from this film, isn’t necessarily the battle sequences, but it’s the fact that a mostly white infantry troop is led by an African American Lieutenant. Stateside, African Americans continue to struggle for equality, but in war-torn, ravaged Vietnam we see a white man and a black man laughing together about letters from home. As filmmaker and photographer Pierre Schoendoerffer followed Lieutenant Joseph B. Anderson’s platoon, he was given an opportunity few artists receive – a chance to recognize, that despite our racial differences, it’s our humanity that unites us. The narrator describes the theme of the film best when he declares that in exploring Vietnam, ”I discovered, above all, America.”

“Make War Not Peace” is the tag line for Emile de Antonio’s 1968 award-winning documentary In the Year of the Pig. Without a narrator (or voice of God) leading us through the film, De Antonio allows us to consider the implications of French and American intervention in Vietnam. Instead of following traditional rules of historical narrative documentary, the film engages philosophical ideas of conflict and medium as a baseline for constructing an antiestablishment interpretation of the War in Vietnam. Through a satirical collage of archival footage, still images, interviews, on-the-ground action, and sounds, De Antonio’s film reimagines how films should be made – with artistic freedom.

Directed more traditionally, North Star: Mark Di Suvero (1977) is a documentary film about sculptor Mark Di Suvero, who lived in self-imposed exile in France in protest of the United States involvement in Vietnam. During this time, he created sculptures in response to the war, which has since become some of his most recognizable works. Equaling the artistic vision of Di Suvero’s work is this film, shot in both back and white, and color, North Star takes us into the mind of an artist and creates a vision of the future of art.

In their unparalleled access to the war itself, these films are a perfect time capsule of the then- zeitgeist. In context with the exhibition artworks they help unpack challenging notions of a confused, frustrated, and worried American public of the era. Are all films art? I’m not sure I have an answer, but what I do know is that these three films are powerful in their creative approach to storytelling, fearless in their engagement with difficult content, and innovative in their making. Unlike other traditional works of art, these films offer an understanding of Vietnam that allows the viewer to step inside the shoes of a soldier, go back in time, and see the world through an artist’s eye. This is the beauty of filmmaking – it’s an empathy machine designed for a momentary glimpse into another’s life and experiences. As film philosopher Andre Bazan once said, “The role of cinema here is not that of a servant nor is it to betray the painting. Rather it is to provide it with a new form of existence.”

In The Year of the Pig will be shown on Friday, May 10, at 7 pm; North Star: Mark Di Suvero will be shown on Saturday, July 13, at 3 pm. Both films are free to the public and will be screened in SAAM’s McEvoy Auditorium.