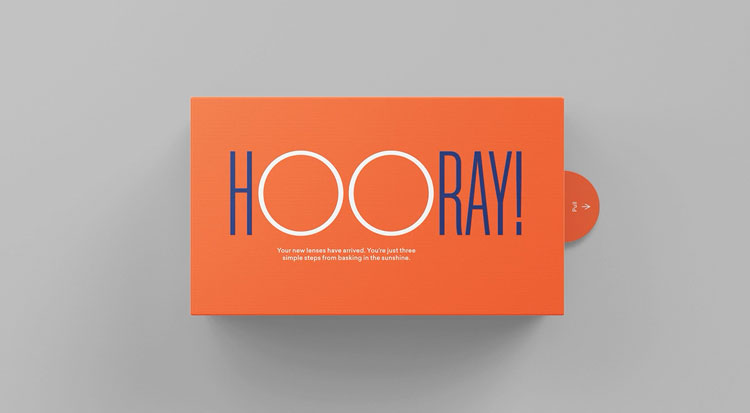 As well as an identity overhaul, Baxter & Bailey has set new strategy guidelines, redesigned the packaging and created a social media campaign.

Sunglass Fix was established in 2006 as a way to provide a sustainable solution for scratched sunglasses. According to the company, one billion pairs of sunglasses are made every year and it can be difficult to find replacement lenses on a budget.

Its replacement service allows people to find custom-cut lenses for their frames and install them themselves. A pair of replacement Ray-Ban lenses cost around £20, for example. The company now has over 130,000 replacement lens models.

Baxter & Bailey design director Rory Brady says that Sunglass Fix needed an identity to help it stand out from its competitors. The lenses are manufactured at a specialist workshop in Byron Bay, New South Wales and this “artisan” focus was also an influence on the identity, the designer adds.

The brand’s logo has been retained, though the components have been “tidied up”, according to Brady. The ‘OO’ visual now rolls out across the identity, including on the packaging’s sleeve case. It can also be animated in a winking expression.

A blue and orange colour palette is in use, chosen for its “joyful” connotations, Brady says. Orange was chosen for its warmth, the designer adds, and as a representation of the sun. “The high-end fashion world tends to be pared-back with muted colours,” he explains, and the blue shade developed from this as a contrasting “richer, darker” tone.

The team has also created an interchangeable palette for the brand, which is set to change every few years, in a similar way to fashion brands. This alternate colour palette is based on the same principles of contrasting tones, Brady adds.

The typeface Sailec has been chosen for body copy while Akkordeon is used for the headline typeface. The latter was picked for the way it contrasts with the ‘OO’ visual, Brady says. The ‘O’ glyph is formed from a custom cut of the typeface.

Akkordeon stands out in the sector, Brady adds, delivering personality as well as conveying the company’s “bespoke engineering element”.

One of the most prominent focuses for the project was the packaging which had several requirements, according to Brady. It had to be able to hold the brand’s biggest and smallest lens size alike, as well as accommodate an order of multiple products at a time (up to four lenses).

It also had to be small enough to fit through letterboxes, and sufficiently light-weight to make international shipping a reality. Baxter & Bailey was keen to use the two holes as a way to represent sunglasses in the packaging, and as a continuation of the logo. The final product has “a little bit of theatre built in”, the design team says.

The case is made from corrugated cardboard which provides suitable protection and aligns with the brand’s sustainable ethos, Brady adds. The box also acts as an envelope to make the shipping process as quick and easy as possible – this meant that the surface area had to be big enough to fit an airmail stamp on, Brady adds.

There’s a graphic on the inside of the packaging top which shows people how to install the lenses. The lens pouches are also biodegradable, the designer says.

The studio has also created the brand’s first social media campaign, which features vintage photography and a “tongue-in-cheek” tone, Brady adds. Hand-drawn illustrations of pizzas and ice-creams are overlaid in the place of sunglasses, with the strapline: “That’s not a sunglass fix.”

When the team started work on the project, the prospect of a live shoot was impossible because of lockdown, Brady explains.

What do you think of the new identity? Let us know in the comments below.