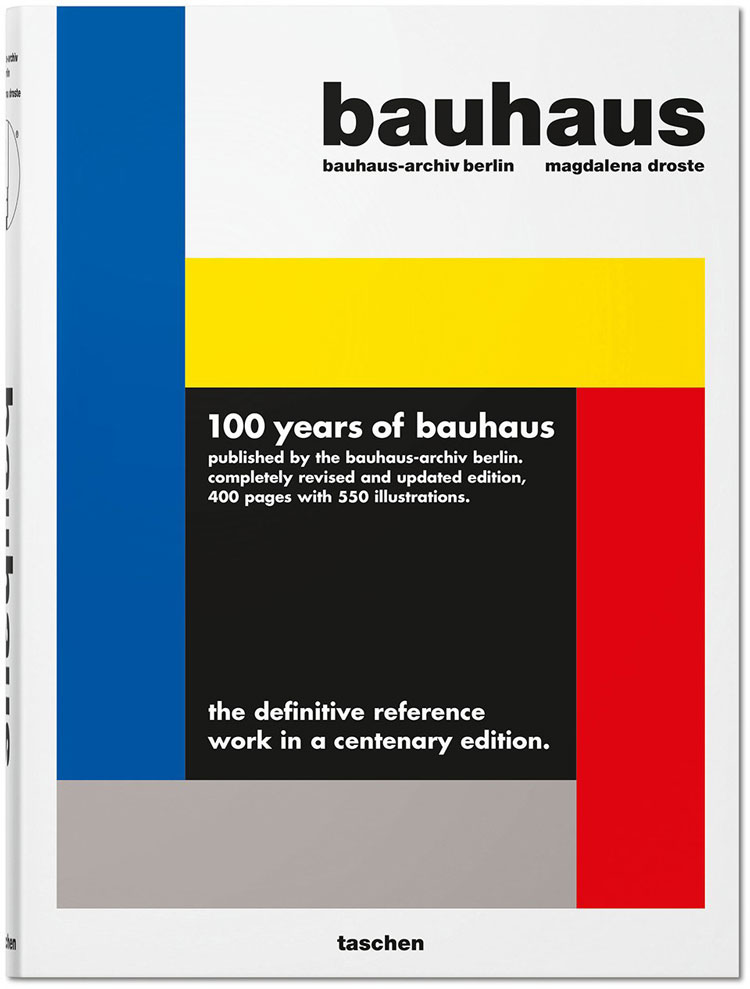 Taschen has released a new edition of a book looking at the beginnings and rise of Bauhaus, to mark the centenary year of the movement.

The 400-page book explores the history and teachings of the Bauhaus School of Art and Design, which launched in 1919 in Weimar, Germany, alongside its impact on design to this day.

Complete with around 550 images in total, including photographs, sketches and architectural plans, the book looks at the ideas that came out of the school over its 14 years of existence, and how these changed over time.

The modernist art school, more commonly known as the Bauhaus, was founded by Walter Gropius, a German architect.

The institution championed the concept of creating Gesamtkunstwerk – “a total work of art” – which involves bringing different art forms together, such as fine arts, crafts, design and architecture.

Key ideas that came from the Bauhaus include “form follows function”, which means the purpose of a design should act as a starting point, rather than the way it looks aesthetically.

Further principles include being honest and raw with materials, for example, not masking or removing structures such as wooden beams, but instead leaving them exposed.

Teachers at the school included architect Adolf Meyer, artist Wassily Kandisky, designer Lilly Reich and photographer Walter Peterhans, among many others from a range of disciplines.

The school, which moved to Dessau in 1925 and later to Berlin in 1932, was closed in 1933 under pressure from the Nazi regime, but its ideas continued to spread around the world thanks to those who were involved in the school emigrating.

The Taschen book was created alongside the Bauhaus-Archiv, a Bauhaus museum in Berlin, and was originally published in 1990.

Droste says the aim of the book – both old and new editions – is “to show the Bauhaus as an endeavour with rich creative energy”.

She is keen to avoid picking out highlights or favourite projects and instead says the purpose of the book is to explore the school’s methods of teaching and proposed ways of creative thinking.

“My aim in writing was to tell the history of the school as an institution,” she says. “What was the pedagogy? How did it change and what are the underlying aims?”

While readers should delve into the book themselves to discover the school’s methods and practices in-depth, one classic Bauhaus teaching Droste does reveal is the need for designers or artists to “create art as a Gemeinschafts project”, which means to work collaboratively or as part of a community.

The updated version of the book contains around 250 new images with new captions, updated biographies of key people from the Bauhaus alongside bibliographies of their work and a new foreword.

The new introduction focuses on the centenary, and claims that 100 years later, Bauhaus continues to inspire the work of designers in a wide range of fields, as well as teaching methods. It says that the “holistic, often utopian aspiration to reform all aspects of life” seen at the Bauhaus school “has lost none of its fascination today”.

Asked what Bauhaus means today, Droste says it is not possible to give a “comprehensive definition”.

“There are many approaches [to Bauhaus]: a way of learning, an experimental education and teaching, but also a stylistic approach,” she says. “It stands for openness and internationality.”

Defining the historic Bauhaus school is even “more complex”, she adds, as it changed throughout the school’s existence.

The school was founded in 1919, at a time when “Germany was ruined after four years of World War One and was looking at how to start a new future,” Droste says. Founder Gropius combined ideas of the Deutsche Werkbund (German Association of Craftsmen) with those of English arts and crafts reformers, using them in a school context and encouraging “radical” ideas.

The Deutsche Werkbund was a state-sponsored group which looked to incorporate good design into mass-produced industrial products, with the aim of giving Germany a design and architecture identity, to help the country compete on a global scale.

The directors of the school, Walter Gropius, Hannes Meyer and Mies van der Rohe, played “the most important” role in changing design approaches through Bauhaus, according to Droste, but she believes there are “many reasons” as to why it has had such an enduring influence.

“The historical Bauhaus invented itself as a brand,” she says. “This makes it easy for reception today. People love its creativity.”

A key element of the updated Bauhaus book is new photos of female students at the Bauhaus school, including those who went on to be recognised for their work. They are mainly pictured in settings that reflect their future careers, including ceramic artist Marguerite Friedlände outside a ceramics workshop, and future architect Lotte Beese, who was the first woman to study in the architecture department.

“The photos tell of the personal adaption and identification with the Bauhaus,” Droste says.

Other new images include those of architectural and product design projects, such as a depiction of the development of Bauhaus-style glass table lamps by industrial designers Wilhelm Wagenfeld and Carl Jacob Jucker.

Both the original and updated versions of the book were designed in-house by Taschen. Each double-page spread features photos or imagery, often taking up the full page but usually accompanied by either text or picture captions.

These are either set out to group together a selection of similar projects, such as furniture design, or those following a similar design style, such as projects featuring brightly coloured geometric shapes.

There are also many black and white photos throughout the book of students and teachers, and the school itself.

The book is split into sections which include Weimar Bauhaus – Expressionist Bauhaus, Dessau Bauhaus: Institute of Design, and Hannes Meyer: Necessities, Not Luxuries.

Bauhaus. Updated Edition, is available to buy now from Taschen for £40.