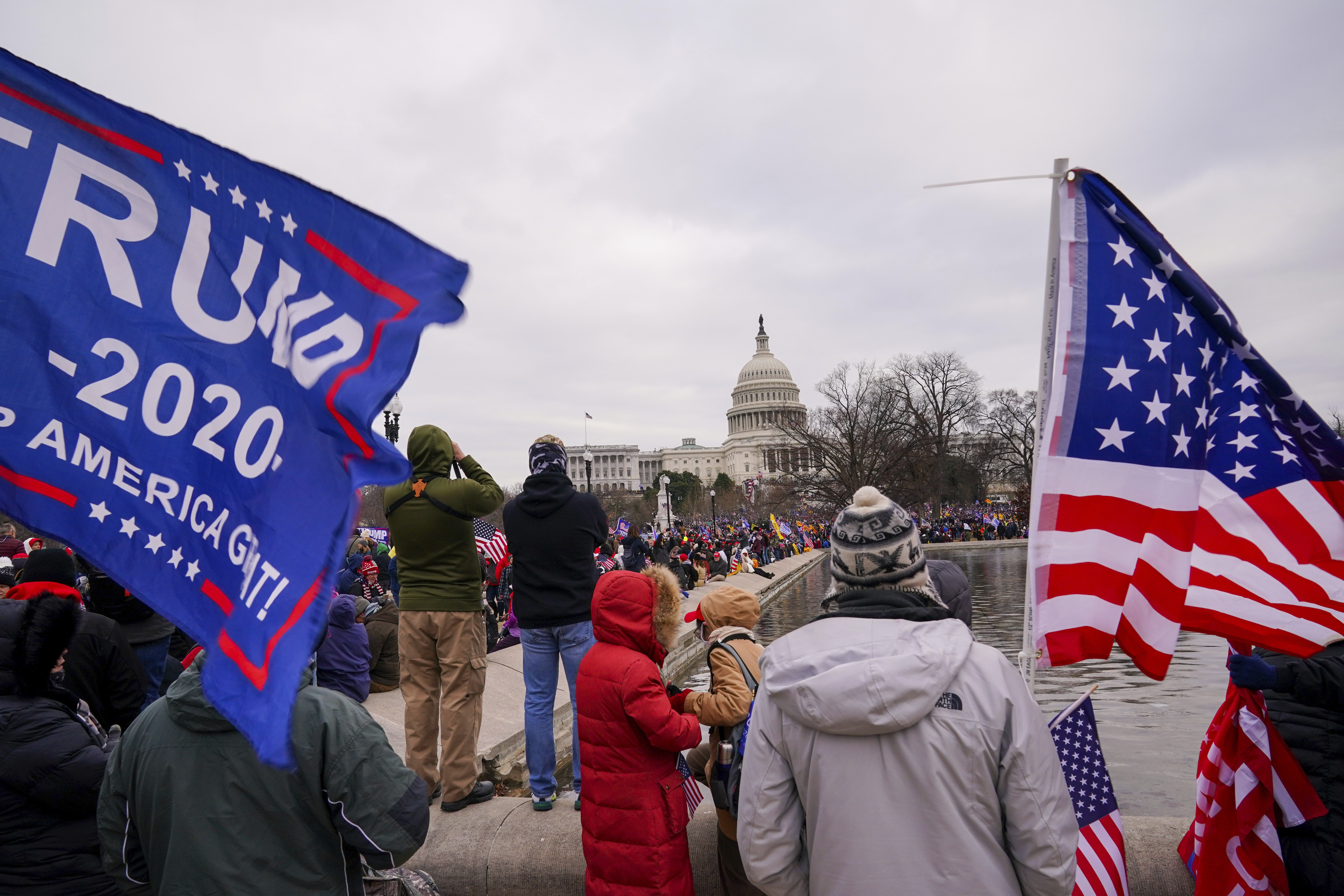 Want the best of VICE News straight to your inbox? Sign up here.

A bevy of police officers and first responders are under investigation for possibly participating in events leading up to the storming of the U.S. Capitol last week, and in some instances entering the building.

From New York City to Seattle, law enforcement agencies have announced inquiries into how members of their own ranks were involved in the events on January 6 that left five people dead, including one Capitol Police officer, while dozens more were injured as supporters of President Donald Trump attempted to interrupt the official congressional certification of President-elect Joe Biden’s victory.

It’s unclear if any law enforcement officers were part of the mob that broke into the Capitol, or how many attended Trump’s rally earlier that day. But the potential involvement of officers in what turned into a violent and historic assault on the Capitol could further undermine trust in law enforcement.

In the days since the insurrection, police departments and sheriffs’ offices across the country have been forced to reckon with officers in their own ranks who allegedly attended the rally preceding Wednesday’s riots, snapped photographs inside the Capitol, or gleefully recounted the day’s events online. As a result, some cops have been placed on leave.

Capitol Police, who are charged with protecting Congress, have also been accused of failing to prepare for the violence Wednesday despite calls for an attack on the Capitol being openly discussed on social media platforms.

Here are some of the local law enforcement agencies that have announced investigations into their own members for alleged involvement in the events around the Capitol on Wednesday:

A member of the nation’s largest police department is being investigated by both the NYPD  and the FBI for their possible involvement in last Wednesday’s events, NYPD spokesperson Sergeant Edward Riley confirmed to VICE News Monday.

“There is no name yet released because we don’t know yet if it’s true or not,” Shea told NY1, a local news station. “But I can tell you that anyone committing crimes certainly would have a very short shelf life with the NYPD.”

Last week, an NYPD spokesperson told Newsday that the department would be reviewing video of the Capitol riots to identify any officers who may have attended the violent gathering.

An anonymous tip to the New York City Fire Department has officially begun an investigation into at least two members of its ranks.

“The department received anonymous allegations that active or retired members were present at the events at the United States Capitol on January 6 and, as required, has provided that information to the FBI,” FDNY spokesman Frank Dwyer told VICE News.

At least one unidentified person who was outside the Capitol during the siege was photographed wearing an “FDNY” jacket, featuring the squad number “252,” according to the New York Daily News. The outlet also reported that at least one other person said to be an active member of the fire department was also photographed outside the Capitol last week. This person was not wearing anything to tie them to the FDNY, the outlet reported.

Seattle Police Chief Adrian Diaz confirmed that at least two of the department’s officers are being investigated by the city’s Office of Police Accountability for “reportedly [being] in Washington, D.C. on Wednesday.” Diaz said that the two officers have been placed on administrative leave until the investigation concludes.

“The Department fully supports all lawful expressions of First Amendment freedom of speech,” Diaz said in a statement Friday. “But the violent mob and events that unfolded at the U.S. Capitol were unlawful and resulted in the death of another police officer.”

Diaz said that the department will not continue to employ any officers who may have played a part in the storming of the U.S. Capitol.

“If any SPD officers were directly involved in the insurrection at the U.S. Capitol, I will immediately terminate them,” Diaz wrote in his statement.

The Zelienople Police Department, located 30 miles north of Pittsburgh, has opened an investigation into Thomas Goldie, one of its officers photographed while attending a Pro-Trump rally in D.C. last Wednesday, according to ABC Affiliate WTAE-4 Action News. Although he attended the event, police Chief Jim Miller said that Goldie was not one of the people involved in the taking of the Capitol Building, according to the outlet.

In the photos posted to Facebook by a woman whose last name is also Goldie, the officer can be seen wearing a cap supporting the president with the phrase, “Fuck Your Feelings” emblazoned on it.

“We made it,” the Facebook photo caption reads, according to a screenshot published by the Pittsburgh Current. The photo has since been deleted, but screenshots of the image have made the rounds on Twitter.

Miller told the Current that the department has turned over the matter to the Zelienople Legal Department.

Neither the Zelienople Police Department or Goldie responded to VICE News’ request for comment.

A Philadelphia police detective has been temporarily reassigned while her department’s internal affairs division probes her alleged attendance at Trump’s rally on Wednesday, according to the Philadelphia Inquirer.

The police department was tipped off to Detective Jennifer Gugger’s alleged presence at the protest and removed her from her post on Saturday pending the outcome of an investigation, “departmental sources” told the Philadelphia Inquirer. There was no indication that she participated in the storming of the Capitol, or that she engaged in any violence, according to the outlet.

A Philadelphia Police Department spokesperson did not name Gugger when speaking to the Inquirer but confirmed the investigation into a detective’s alleged participation in Wednesday’s events “due to what unfolded” and the detective’s reassignment.

The Philadelphia Police Department did not return VICE News’ request for comment.

Bexar County Sheriff Javier Salazar announced last week that a jail lieutenant who has been on leave for several months, Roxanne Mathai, was under investigation to determine whether she broke department policies or laws after she was seen in photos near the U.S. Capitol Wednesday, according to KSAT-TV, an ABC affiliate in San Antonio.

In pictures that she posted to social media, Mathai does not appear to be doing anything unlawful, according to the San Antonio Express-News. In one photo, Mathai wrote that she wasn’t inside the Capitol “catching a case.” However, the sheriff’s office is trying to figure out whether she refused any sort of order to disperse.

“Not gonna lie…..Aside from my kids, this was, indeed, the best day of my life,” Mathai wrote on Facebook, according to posts seen by KSAT-TV. “And it’s not over yet.”

Salazar said during a news conference Thursday that Mathai had the right to protest, but that “at some point, that assembly became unlawful, and then at another point, she was still there.”

“Whether it happens here within the confines of these four walls or whether it happens in another state or another country, you break the law, I promise I’m going to hold you accountable here,” Salazar said during a press conference last week, according to KSAT-TV.

Mathai’s attorney, Hector Cortes, told the Associated Press that she acted within her First Amendment rights Wednesday and hadn’t entered the Capitol.

Cortes did not return VICE News’ request for comment.

Mathai has been on leave from her department since October, as investigators probe allegations of a “possible inappropriate relationship between her and an inmate,” according to KSAT-TV.

The Rocky Mount Police Department said in a statement Sunday that two officers were “on administrative leave pending review” for their attendance at an “event” in D.C. on January 6.

“The Town of Rocky Mount fully supports all lawful expressions of freedom of speech and assembly by its employees but does not condone the unlawful acts that occurred that day,” the department said in the statement, which did not name either officer nor describe their level of involvement, if any, in the Capitol siege.

A Facebook photo that was shared by a Black Lives Matter activist and authenticated by WSLS-TV, an NBC affiliate in Roanoke, Virginia, appears to show the two officers inside the Capitol, in front of a  statue of John Stark in the Capitol’s crypt. Stark, a general during the American Revolution, once wrote a toast that led to New Hampshire’s present-day motto, “Live Free or Die.”

After the photo circulated, Rocky Mount Police Officer Jacob Fracker wrote in a Facebook post that was screenshotted by WSLS-TV: “Lol to anyone who’s possibly concerned about the picture of me going around…. sorry I hate freedom? Sorry I fought hard for it and lost friends for it? not like I did anything illegal, WAY too much to lose to go there but, y’all do what you feel you need to lol.”

Rocky Mount Police Sgt. Thomas “T.J.” Robertson, Fracker’s supervisor and the second man in the photo, said in a Facebook comment on Fracker’s post that he was “proud” of the photo, which he wrote “shows 2 men willing to actually put skin in the game and stand up for their rights,” according to WSLS-TV.

Fracker declined to comment to WSLS-TV through his wife. Robertson told the outlet that the photo was taken “long after any disorder and we were let in and escorted by Capitol Police.”

Robertson said in another interview with the Roanoke Times that he didn’t support violence at the Capitol, nor did he take part in any violence.

“The Capitol building is as big as our town,” Robertson told the Roanoke Times. “Where I was at there was no violence. There was no fighting with police officers. The door was wide open and police officers were actually handing bottles of water out to people that came in.”

VICE News was unable to reach Robertson or Fracker for comment.

David Ellis, the police chief in Troy, New Hampshire, attended the rally but is not under investigation.

He called the treatment of police during the riot “ridiculous” in an interview with New York Magazine. Ellis told New Hampshire Public Radio that he was at the rally as a spectator and started to leave as it ended; he was concerned the situation might become violent as others began moving toward the Capitol. He said he accepted the outcome of the election, despite being a Trump supporter.

“I witnessed the people harassing the riot police that were getting in their gear on Constitution Ave, as I’m walking back to get to the train station at Union Station,” Ellis told New Hampshire Public Radio. “It was ridiculous, people were giving police such a hard time.”

The chairman of New Hampshire’s Democratic Party has since called on Ellis to resign, according to the Concord Monitor.