this year, desert X will be collaborating with the royal commission of alula (RCU) to organize desert x alula 2020 in the desert of alula, saudi arabia. featuring interactive installation of 14 artists from neighboring countries, the site-specific contemporary art exhibition brings together a plurality of voices to speak on the environmental conditions, historic context and the surrounding communities of the ancient oasis. co-curated by saudi curators raceme farsi and aya alireza with neville wakefield, the artistic director of desert X, the public exhibition will be the first of it’s kind in saudi arabia. 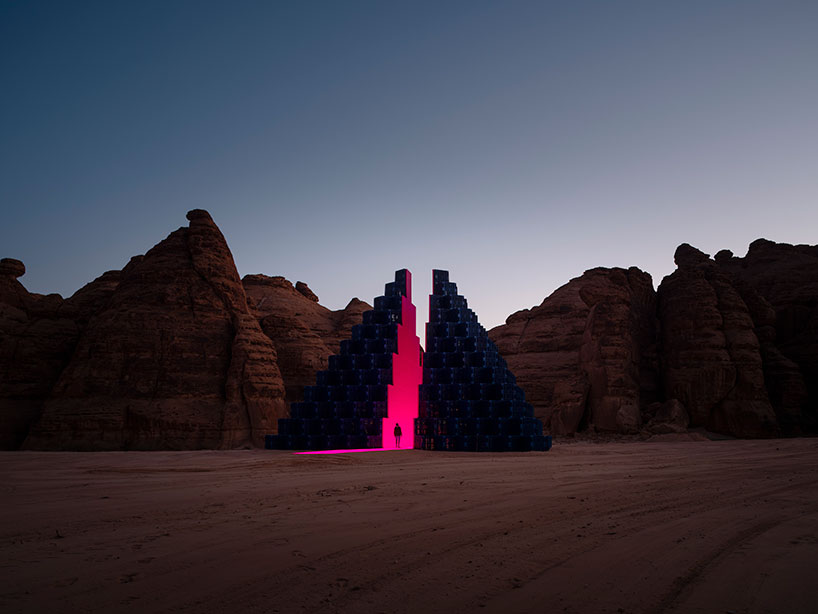 available to the public from january 31st 2020 to march 7th 2020, the large-scale desert X installations respond to the landscape and specific conditions of the historically significant oasis. surrounded by high sandstone cliffs, the sand valleys of alula has served as the cross cultural route for incense trade, connecting asia, africa and europe for thousands of years. the landscape contains works of nature and mankind, expressing the long and symbiotic relationship between the environment and the successive civilizations that established the cultural route. 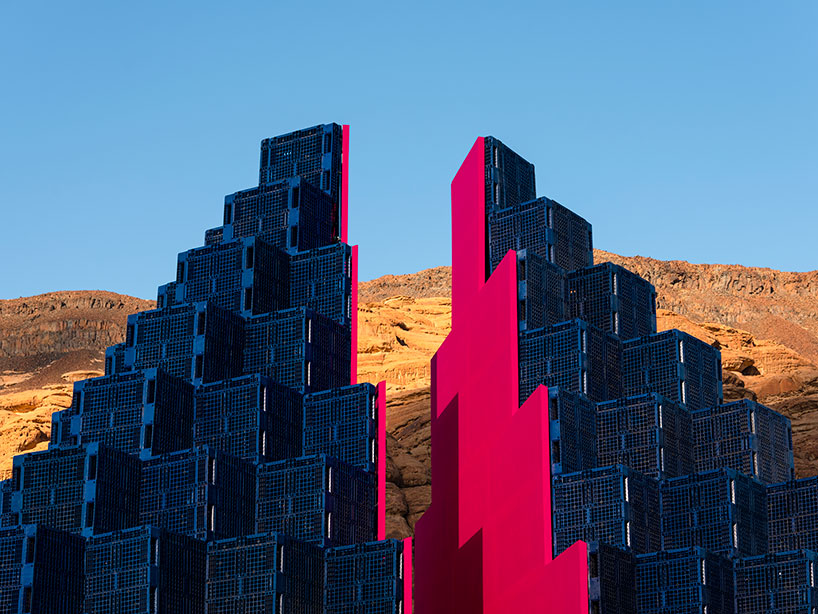 ‘a concise passage’ by rashed alshashai

‘artists are at the centre of this exhibition conceived to foster artistic exchange and dialogue across continents,’ explains raceme farsi, desert x alula co-curator. ‘the diversity of backgrounds, concepts, and themes found in this exhibition affirms the power of art in creating cultural exchange beyond geographic boundaries. alongside international and regional artists, desert X alula gives voice to saudi arabia’s dynamic artistic community, cultivating new audiences for contemporary art in the country. many of the works on view are informed by the multiple layers of history shaping the region and through exhibitions like this, we are working towards a more inclusive future through art.’ 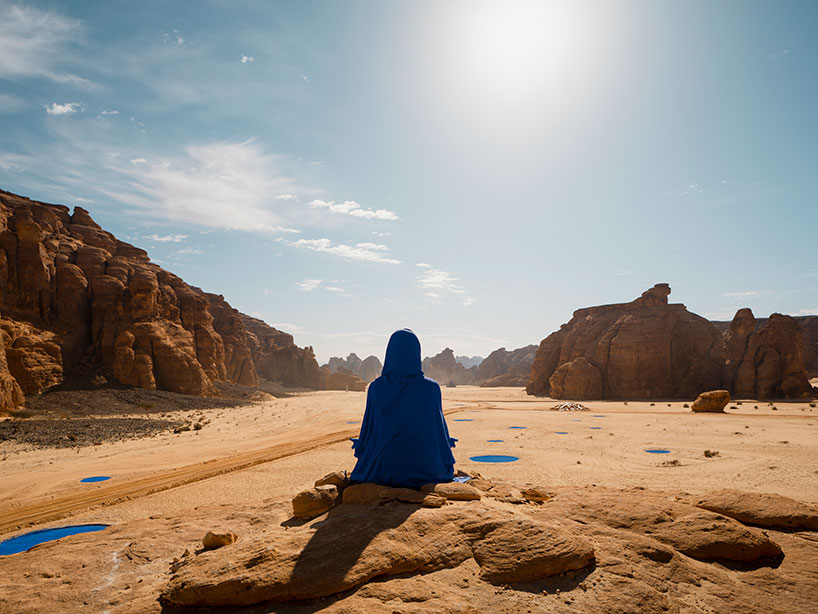 desert X alula marks an exciting and transformative moment for saudi arabia, reviving this cultural legacy and adding new layers to the destination’s future as an open living museum that inspires creativity. with the activation of future collaborations, RCU looks to continue the preservation of the national heritage and the cross-cultural dialogue between artists from saudi arabia and its surrounding regions. with more exposure, the neighboring communities and local institutions will also have more opportunities to develop. 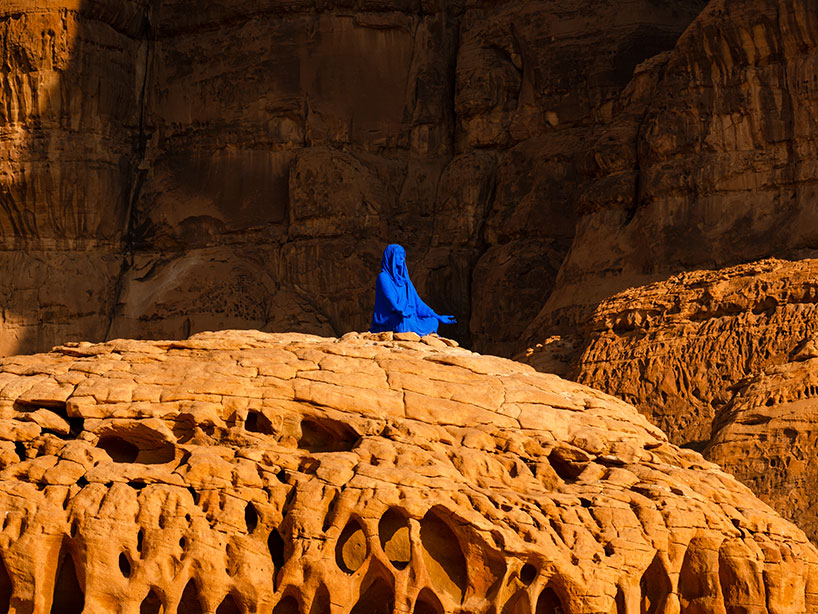 lita albuquerque – ‘star map NAJMA (she placed one thousand suns on the transparent overlays of space)’ depicts a blue fictional character, elyseria, who is a 25th century female astronaut with the mission to teach about the stars and navigation, an ode to the region’s genesis as the birthplace of astronomy.

rashed alshashai – ‘a concise passage’ reflects on the passage of goods and trade from ancient past to modern times, creating a bridge between a vast open landscape and the economic systems that determine present day borders. 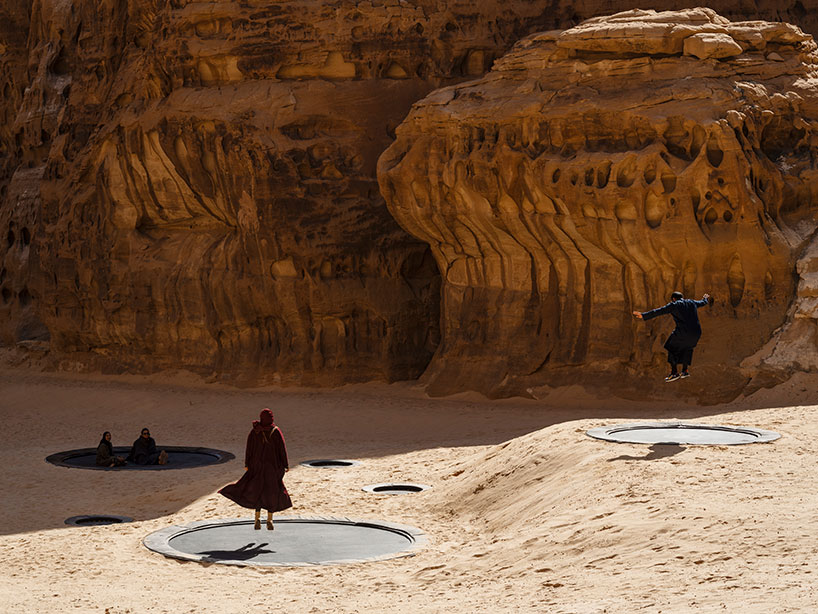 ‘now you see me, now you don’t’ by manal aldowayan

rayyane tabet – ‘steel rings’ references the trans-arabian pipe line company’s pipeline bisecting the arabian peninsula with forty rings forming the sculpture, each inscribed with the distance from the pipe’s source.

muhannad shono – ‘the lost path’ takes youth as the new commodity across saudi arabia through a decaying pipeline that rests motionless, semi-submerged beneath the shifting sands. 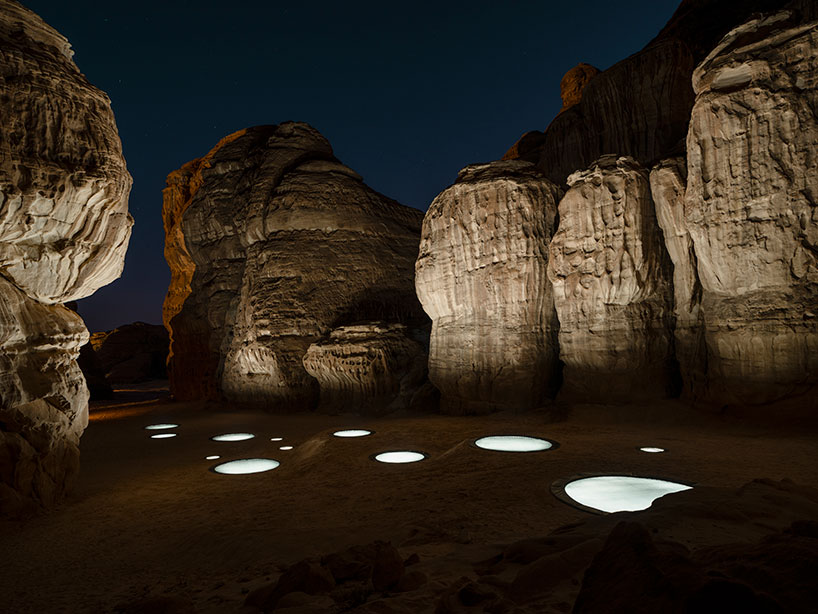 ‘now you see me, now you don’t’ by manal aldowayan

zahrah alghamdi – ‘glimpses of the past’ consists of approximate 6000 tin date containers different sizes, laid across 80 meters across the terrain of alula. The installation is an ode to alula’s agricultural wealth; palm tree groves and springs of water have fueled the area’s trade for generations.

el seed – ‘mirage’ is inspired by the image of fertility that the alula oasis presented to those who first crossed the arid landscape in search of trade, allowing viewers to enter a script like structure submerged beneath the ground. 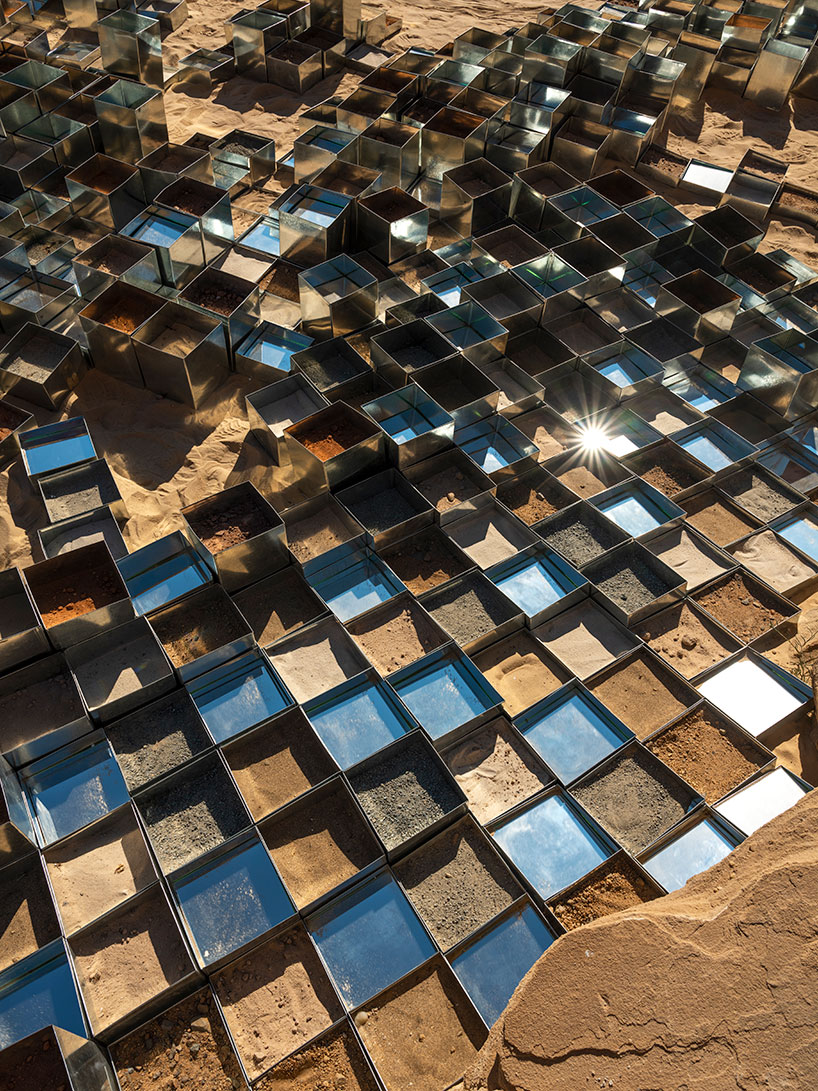 ‘glimpses of the past’ by zahrah alghamdi

manal aldowayan – ‘now you see me, now you don’t’ illustrates temporary puddles of the desert. formed by accident, the puddles can suggest and carry a tremendous amount of information and ideas, but can also disappear at any given moment. constructed like trampolines on ground level, visitors can be seen bouncing on the puddles. at night, light shines through from below, re-activating the puddles. 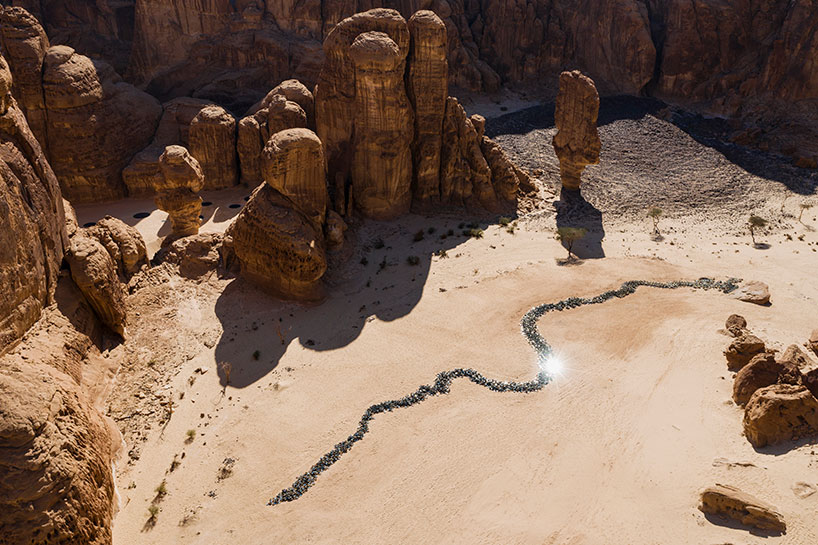 ‘glimpses of the past’ by zahrah alghamdi

nadim karam – ‘on parade’ is inspired by the diverse flora and fauna of the arabian desert, springing out of barren ground like desert bloom after rain.

nasser alsalem – ‘amma qabel’ is a sculpture with both interior and exterior landscapes, which embraces the idea of time as a continuum that connects all cultures and civilizations. the simple gesture of the installation mimics a passage-way with circumference shaped by calligraphic letters that read ‘amma qabl’, which means ‘what precedes’. 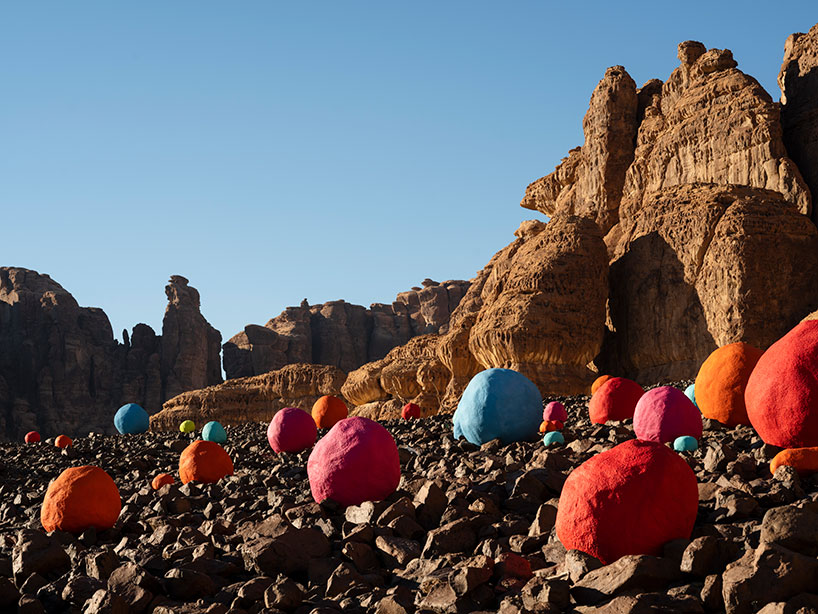 gisela colon – ‘the future is now’ is at once high-tech and futuristic but also reminiscent of the mystery of ancient cultural artifacts such as totems – it speaks to a moment in history marked by the coming together of old and new.

sherin guirguis – ‘kholkhal aliaa’ looks at the role of cultural memory in shaping ideas of the present. wedged within a rock crevice, a sculpture of a bedouin anklet is a symbol of female power and agency as well as a metaphor for journeys, referencing the old city of alula. 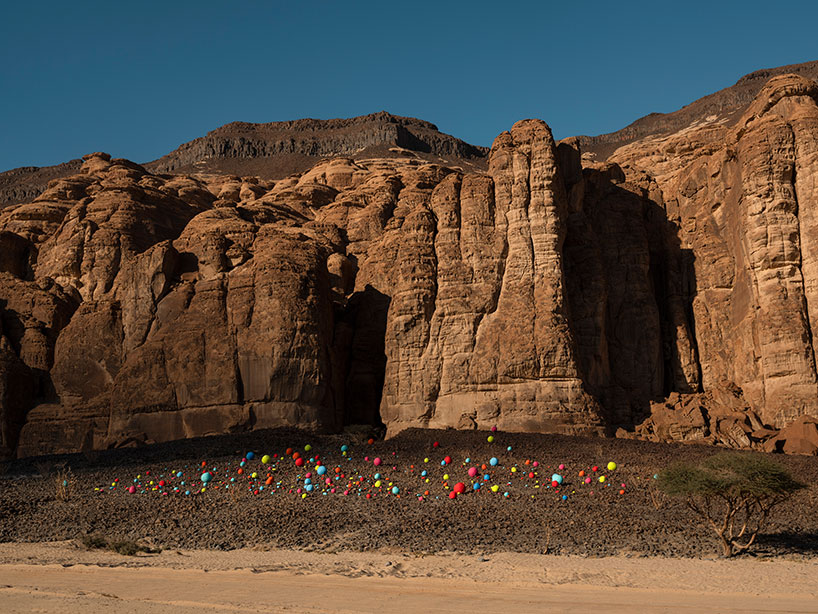 wael shawky – ‘dictums: manqia II’ recalls the once thriving historic town as a place of architectural memory through video projected onto the rockface.

superflex – ‘one two three swing!’ is a call to collective action, connecting people through shared endeavor. 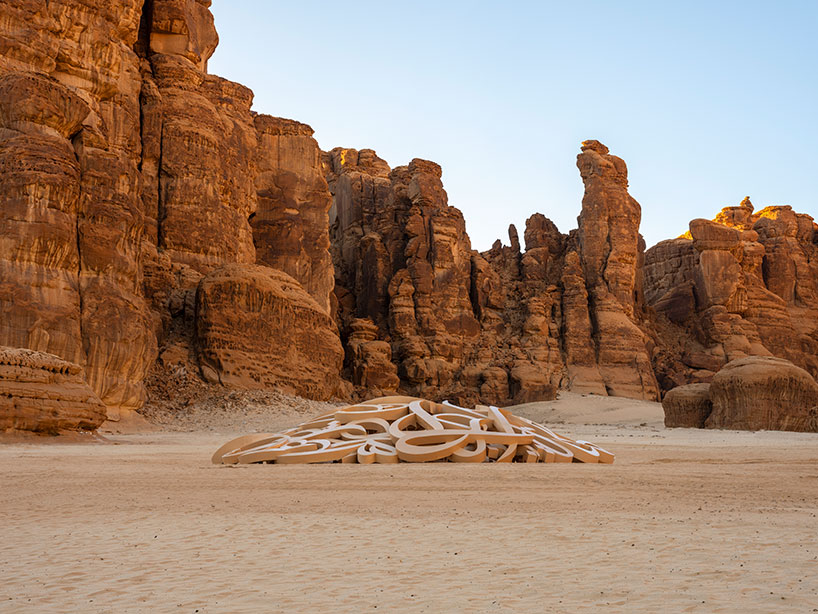 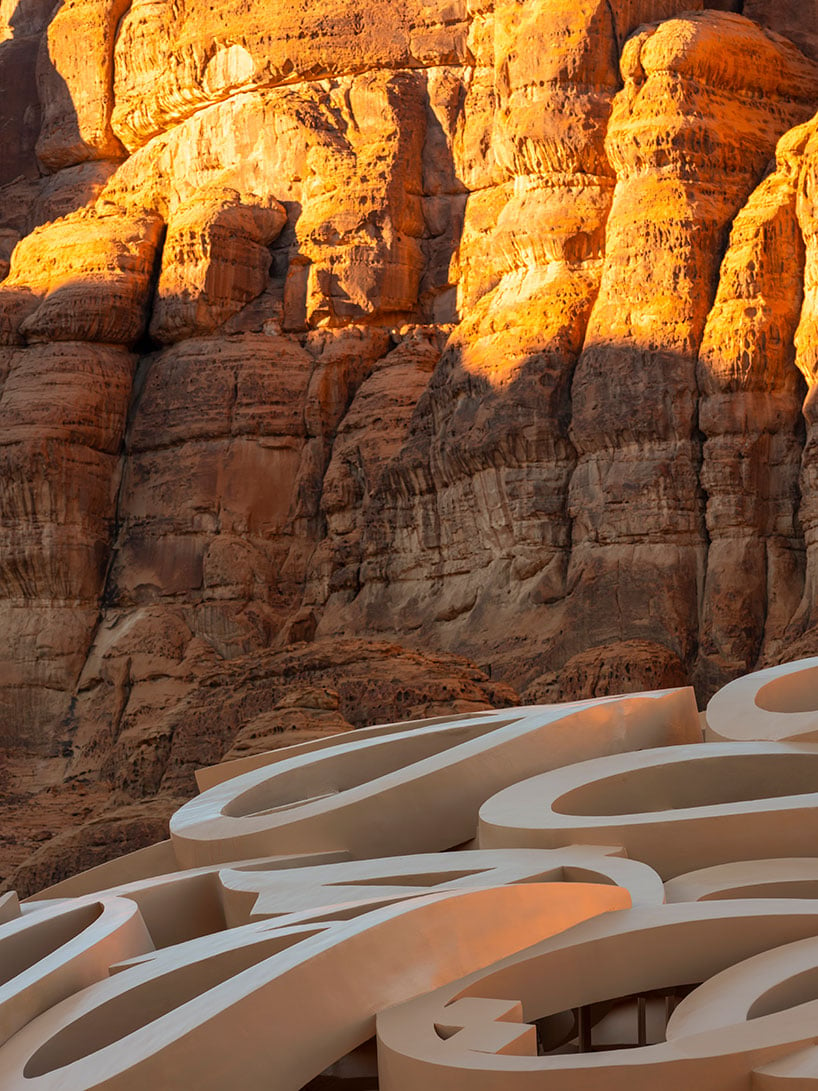