Discover the Meaning Behind These Complex Designs 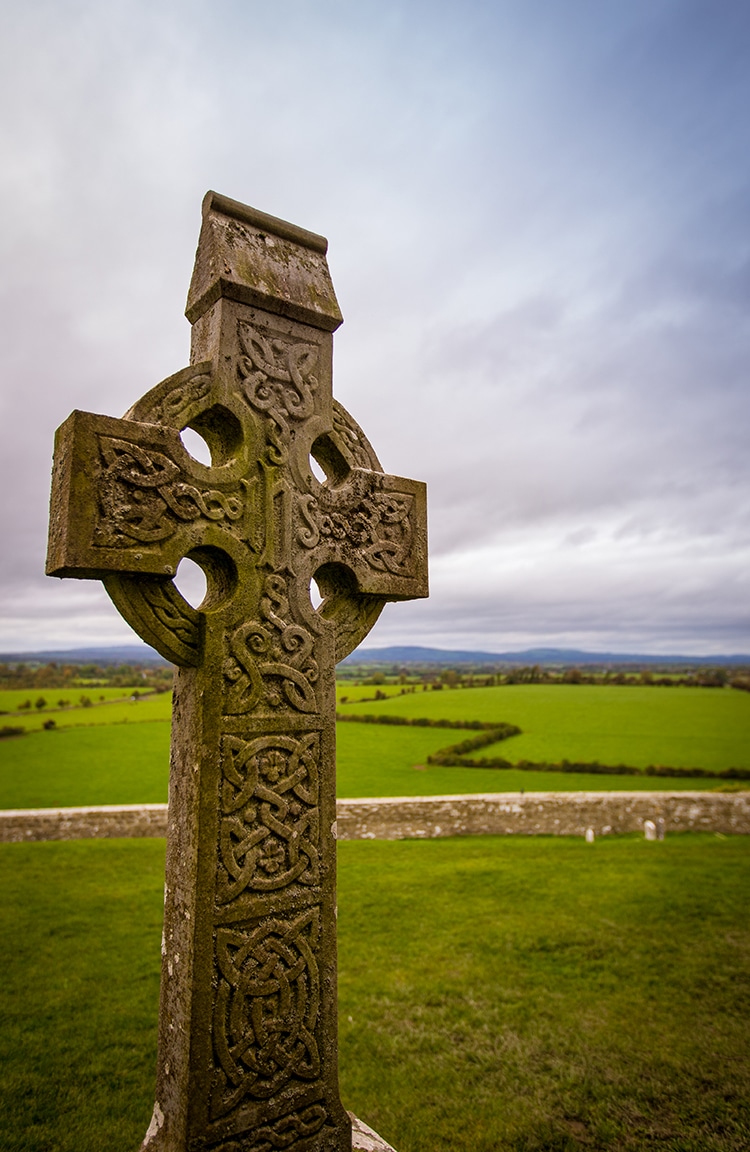 Photo: Stock Photos from RUSTY426/Shutterstock
This post may contain affiliate links. If you make a purchase, My Modern Met may earn an affiliate commission. Please read our disclosure for more info.

You’ve likely seen the Celtic knot before. This intricate motif is found in many places, including tattoos, decorative crosses, and silver jewelry. But how much do you know about it?

Celtic knots are strongly associated with the Irish culture in Ireland and overseas. However, few know the history and meanings behind these beautiful designs. Their story is a long one and shockingly global; many societies have developed motifs of endless or infinite knots. This is the primary characteristic of most Celtic knots—there is no obvious beginning or end.

Read on in this article to discover more about these designs and their meanings. Along the way, you might discover a pretty Celtic gift perfect for a jewelry lover or history buff.

A Brief History of Celtic Knots 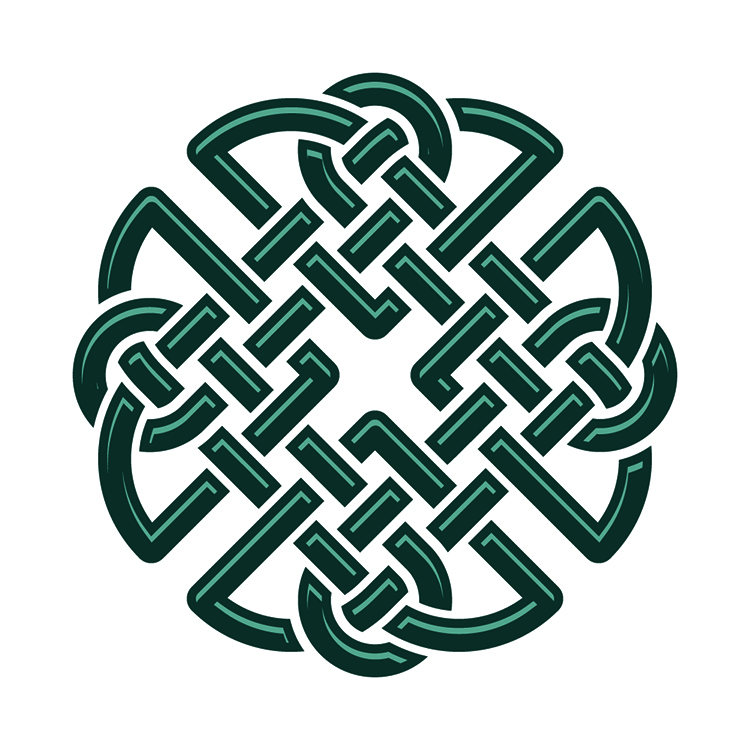 Pre-Christian Celtic art contained geometric motifs such as spirals, key patterns, and step patterns. The first interlace patterns—looping, braiding, and knotting—arrived on the British Isles with the Romans in the third or fourth century CE. As England, Scotland, and Ireland became Christian, the artwork of these areas began to transform. Around 600 CE, local Celtic traditions merged with Anglo-Saxon to produce the insular style of art which would dominate the early medieval period in Britain and Ireland. Interlaced motifs became an integral part of insular illuminated manuscripts and metalwork, particularly in the work of Irish Celtic monks. 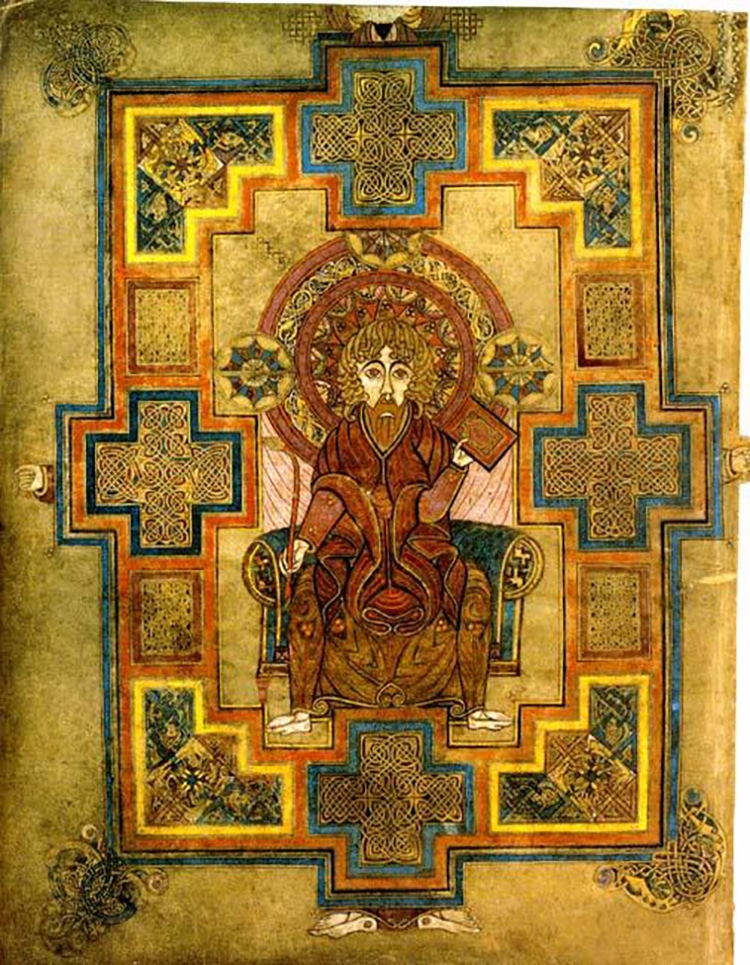 Some of the earliest knotted designs can be seen in the painstakingly-illustrated folios of medieval Christianity. An example can be seen in the famous Book of Kells, copied and illuminated around 800 CE. The rich and gilded borders include many examples of braided and knotted designs that also appear on Celtic crosses and monuments throughout Ireland. Irish missionaries are thought to have carried the style to other Celtic lands, such as Gaul in northern France. While medieval art in Ireland continued to incorporate insular designs, the Viking invasions of the ninth century CE are considered by scholars to have concluded the insular period in England. The style continued in Ireland until around the 12th century.

Where can you find Celtic knots today? 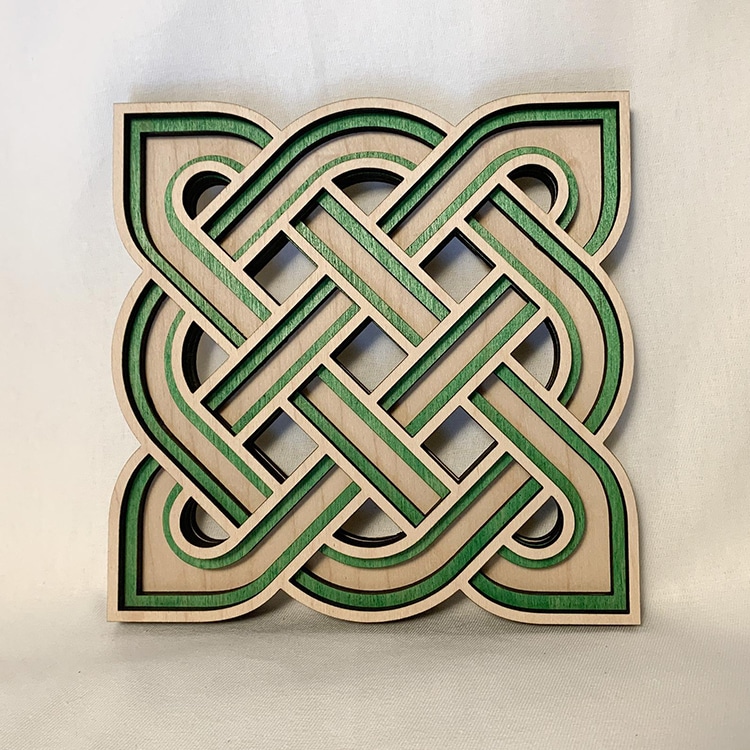 Today, Celtic knots can still be seen on crosses, churches, and other historic public spaces throughout Ireland. Celtic knots are also a popular part of the visual culture for many of Irish-American heritage.

Whether you are looking to embrace your heritage or just like the pretty designs, there are many ways to display these Irish symbols. The knots are often worn in jewelry and can make meaningful gifts for loved ones. Engraved boxes, Christmas ornaments, and household plaques can lend Irish flair to your home. Even if you have no Irish ancestors, these knots are for everyone and similar knots exist in many cultures. 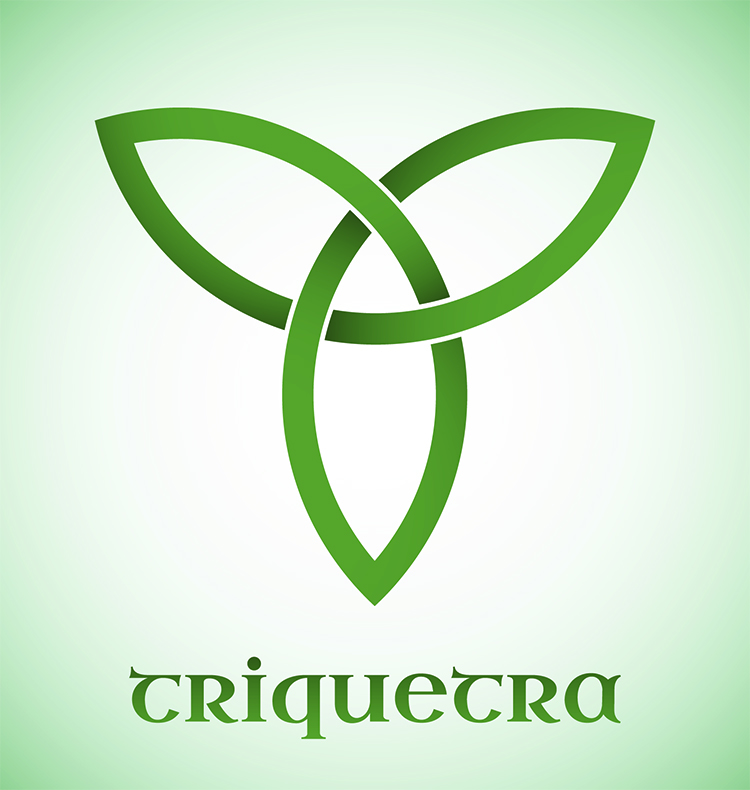 The trinity knot—also known as triquetra, trefoil knot, or triskele—is composed of three arcs. This motif is common throughout insular art, but it is also seen in East Asian Buddhist art. In Christian traditions, the trinity knot became a popular motif in illuminated manuscripts and stone crosses around the eighth century CE. During the 19th-century Celtic cultural revival, popular opinion dubbed the symbol to represent the Holy Trinity of the Christian faith. Repeated or embellished trinity knots are some of the most common Celtic designs. 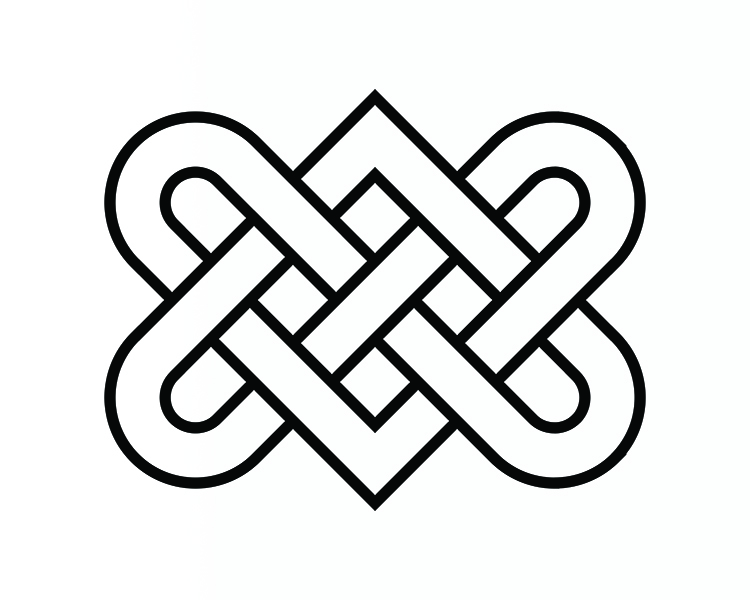 Another common modern Celtic knot, the love knot is prized for its never-ending appearance. Two interlocking hearts form an infinite bond; it is believed that lovers exchanged these knots as symbols of affection. Today you can find the knot on lockets, Christmas tree ornaments, and keepsake boxes—great gifts for the one you love. 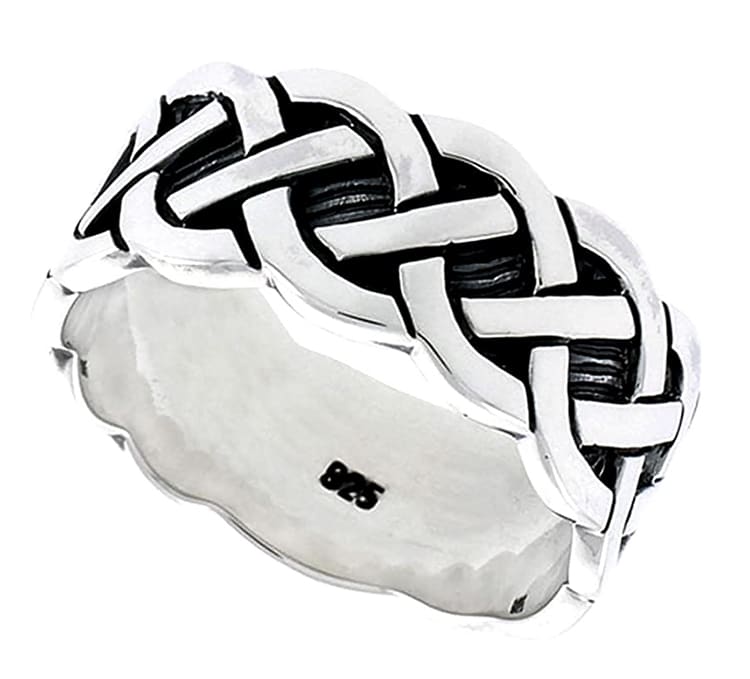 Related to the love knot is another infinite knot, the sailor’s knot. Tradition says sailors crafted these simple two-strand knots as a way to remember their loves back home. The knot symbolizes friendship, affection, and love. It is a common motif on Celtic-style wedding bands, but it also makes a sweet design for delicate bracelets and charms. 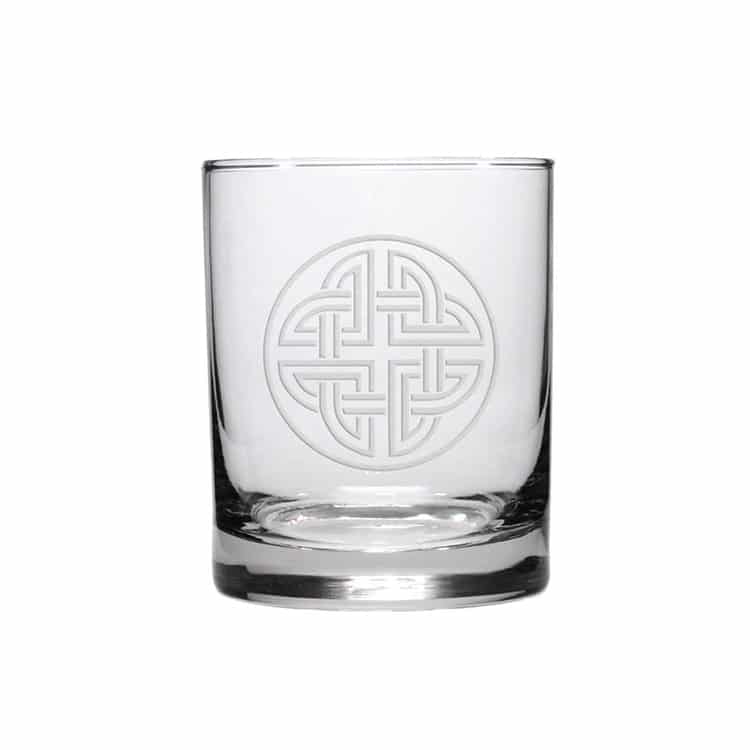 The shield knot is a four-cornered knot which can take a variety of forms ranging from simple to elaborate. Four-cornered knots are common across the world, and the oldest iterations date back to ancient Mesopotamia. In Celtic tradition, the ancient Irish used the knot for protection from spirits or opposing armies. Warriors, children, and the sick all often carried the knot in some form. Today, you can draw on this strength in your daily life with a coffee mug or leather journal. 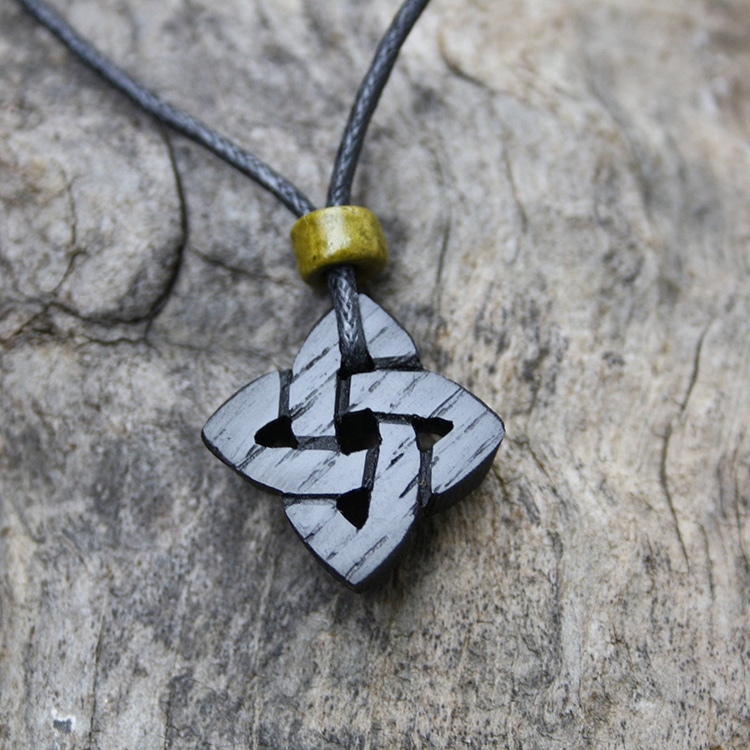 Like the shield knot, Solomon’s knot is also four-cornered. The two endless loops interlock, woven together. The knot is regularly seen in ancient Roman mosaics, but its association with early synagogues likely imbued the design with its present name. The meaning of the knot varies across cultures. The Yoruba people of western Africa use the knot in textiles and carvings as a symbol of royal status. The Jewish tradition, however, regards it as a symbol of eternity. For Celtic knots, this formation likely implies infinite love or faith. 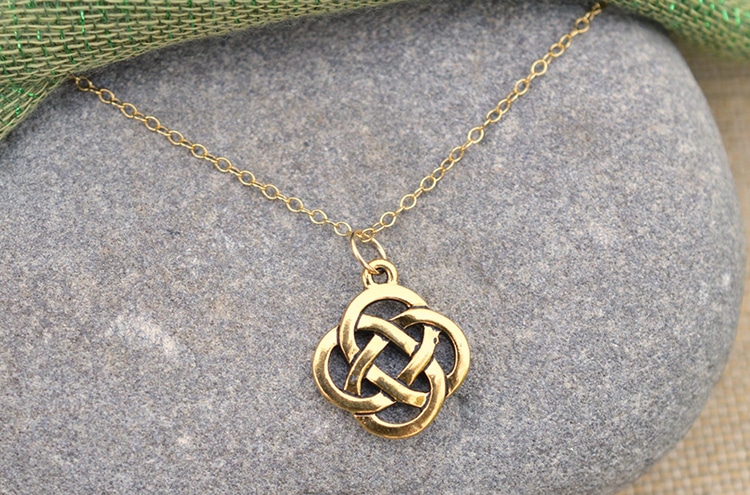 The Dara knot—or eternity knot—is a modern Celtic knot taking its inspiration from traditional infinity knots. Dara knots come in varying styles, but they all draw inspiration from the roots of oak trees which wind and twine in strength. The symbolism of oak roots is grounding for all those who need anchoring in their own strength. 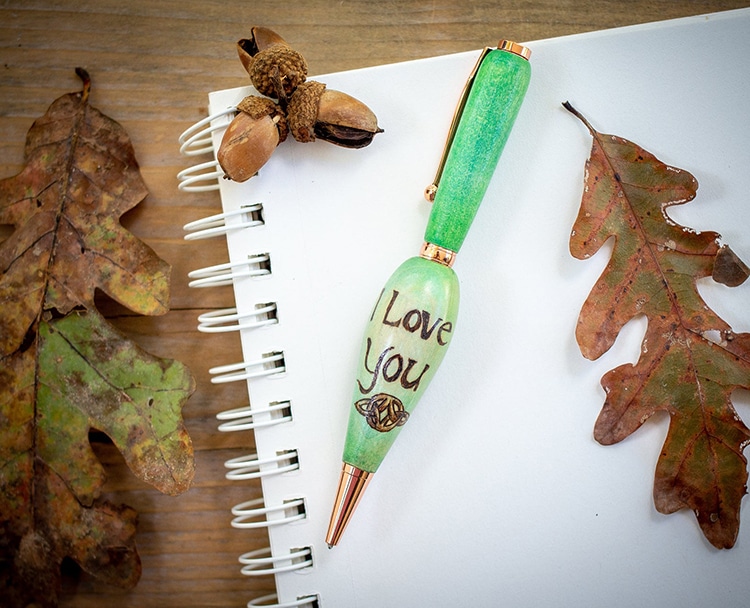 The serch bythol knot is formed from two trinity knots; placed together, the arcs of each knot combine to form a circle at the center. Modern representations of this knot are often found in jewelry or on gifts, as it is thought to denote everlasting love. The three arcs of each trinity knot represent the person’s body, mind, and spirit. Together, they form a central circle which symbolizes eternity. 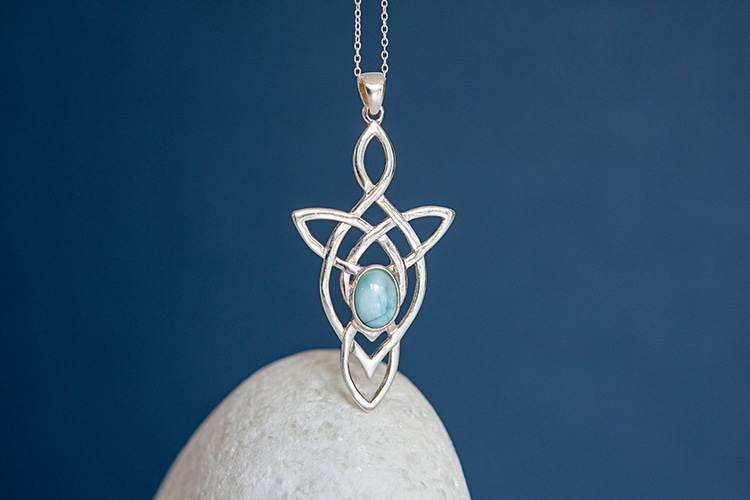 While this knot is not historically authentic, it has drawn upon ancient motifs and come to represent the beauty of motherhood. Combining heart shapes and trinity knots, the motherhood knot resembles a mother holding her child. You will notice a variety of designs that claim to be the motherhood knot; as it is a modern invention, aesthetics may be prioritized.

7 Eye-Popping Handwriting Fonts To Use In Your Digital Designs