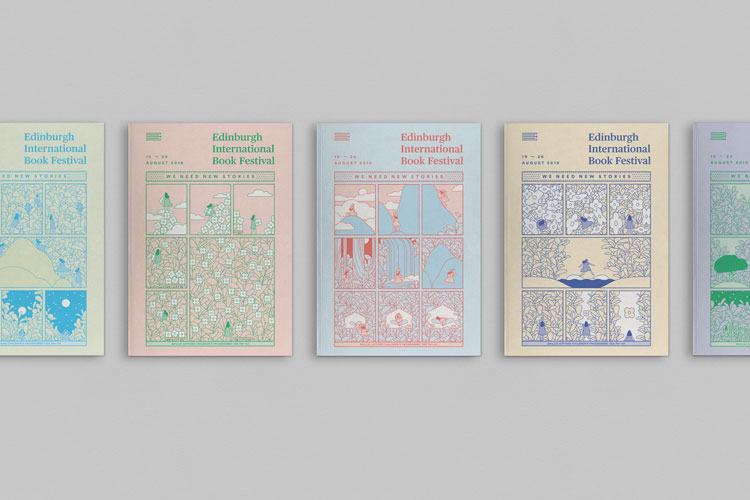 Glasgow-based studio Tangent has given the Edinburgh International Book Festival an illustrative campaign for this year, which looks to tell “stories” through comic strip-style imagery.

The Edinburgh International Book Festival was started in 1983 as a biennial event, then changed to annual in 1997. It is one of the largest literature festivals worldwide, this year featuring more than 900 authors across 800 events, talks and workshops, including novelists, poets, scientists, comic creators, illustrators, historians and musicians.

The event has a core brand — also designed by Tangent, which centres around an “E” symbol with the festival name set in a serif typeface — but changes its campaign ever year in time for the event. Tangent has worked with the festival for 10 years, and created its current core brand, which launched in 2017.

This year, the studio has worked with US illustrator Rose Wong to create a comic strip-inspired campaign that aims to reflect the festival’s 2019 theme of “We Need New Stories”.

The theme looks at the idea of truth and multiple perspectives, questioning “simple” narratives such as those endorsed by politicians in recent years, like “Take Back Control” (the Brexit campaign) and “Make America Great Again” (Donald Trump’s presidential campaign).

Through hosting talks by a wide range of individuals, it looks to celebrate the idea of listening to a diverse range of views, says Nick Barley, director at the festival, from “scientists and politicians to mythmakers and poets”.

The studio has worked with Wong to create five, reversible comic strip “narratives”, which tell a different story depending on whether they are read forwards or backwards.

Each narrative features a character embarking on a journey and looks to express how the “meaning of the journey becomes something completely different” when presented in an alternative way, says Andrew Stevenson, co-founder at Tangent.

The imagery is metaphorical, with the five comic strips looking to reflect different themes, including: how the internet has affected human relationships; acceptance and tolerance of other people’s opinions; community and working as a collective; sharing resources with those less fortunate; and human consumption, and being more ethical and sustainable.

The illustrations feature several elements of Wong’s signature style, such as minimal, line-drawn people illustrations, repetitive motifs of flowers and other objects, and the use of pastels.

This has inspired the palette of the overall festival campaign, which uses pastel blue, purple, pink, yellow and green across touchpoints such as print posters and advertising banners. The use of purple also hints towards the festival’s core branding, which features this colour.

Alongside this, the campaign uses the same serif typeface as the festival’s logotype, alongside a secondary, bold, sans-serif type, surrounded by dots and encased within frames, to further imbue the look of comic strips.

“The pastel colours with tinges of the festival’s brand colours give the whole campaign a lightness of touch,” says Rachel Loughran, account executive at Tangent. “We coupled this with fairly bold typography set in all-caps, as this felt like a good fit for the comic book style.”

She adds that changing the campaign annually aims to help the festival feel “fresh and new” each year. While it looks to be accessible for a wide range of ages and demographics, it also needs to “specifically appeal to authors, thinkers and artists”, she says – and for this reason, has been designed to be open for interpretation.

“We aim to create work for the client that is unconventional and leaves enough room for the audience to engage with the design and draw their own conclusions,” she says. “The main point of this year’s festival theme is that global events can be interpreted from multiple viewpoints and perspectives, and that simple black-and-white readings can be misleading – we really wanted the campaign to reflect this ambiguity.”

The campaign brand is currently rolling out across all touchpoints, including the website and social media, print marketing materials, merchandise and clothing, and will be present on signage throughout the event.

Edinburgh International Book Festival runs from 10-26 August 2019 across Edinburgh, Scotland. Some events require tickets, while some are free.