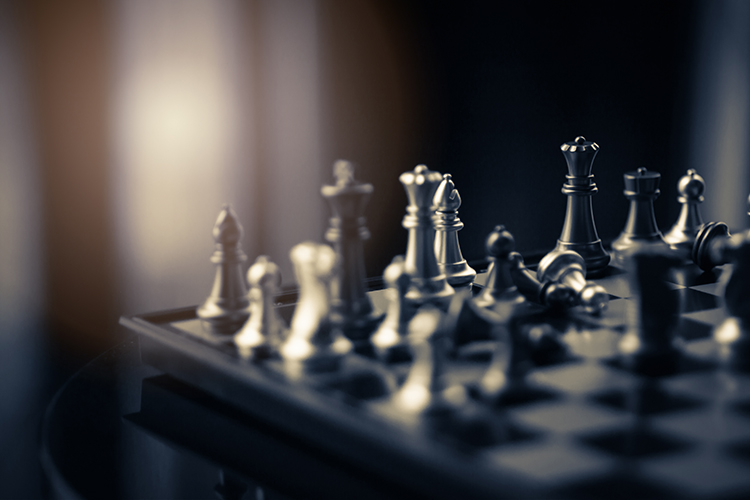 Chess sets across the internet have been selling out for maybe the first time ever. Why? Because Netflix’s The Queen’s Gambit has captured the popular imagination and reignited an interest in the ancient board game. Like other pursuits, chess can go in and out of fashion. It is steadily more popular in some countries—including Russia and India. Its popularity in other regions such as the United States waxes and wanes with the times.

The Queen’s Gambit—with an edgy-yet-charming female chess prodigy—is fictional and based on the 1983 book by Walter Tevis. However, with the mod ’60s fashion and Cold War rivalries, many Americans suddenly find chess both fascinating and approachable. Read on to explore a brief history of this fascinating, ancient board game.

Scroll down to discover the history of the game of chess.

When was chess invented? 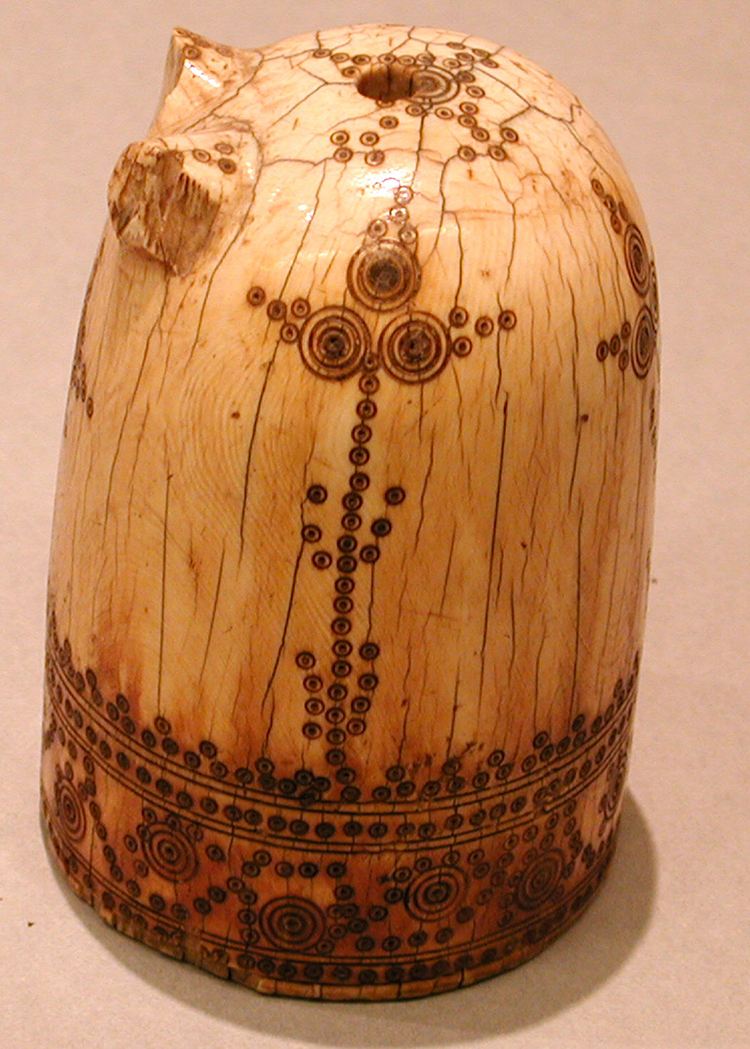 The earliest versions of the game, which came to be known as chess, appeared by the 6th century in India. A game called chaturanga was played on an eight by eight checkered board. The pieces represented different branches of the imperial military and each moved in different ways as in modern chess. Persian visitors to India carried their observations home with them. Recognizing the military and strategic value of the game, it became a pastime of the Sasanian nobility. Called chatrang, the game continued to be played after the fall of the Sasanian Empire. Under Arab rule in the newly Islamic Iran, the game became known as shatranj. 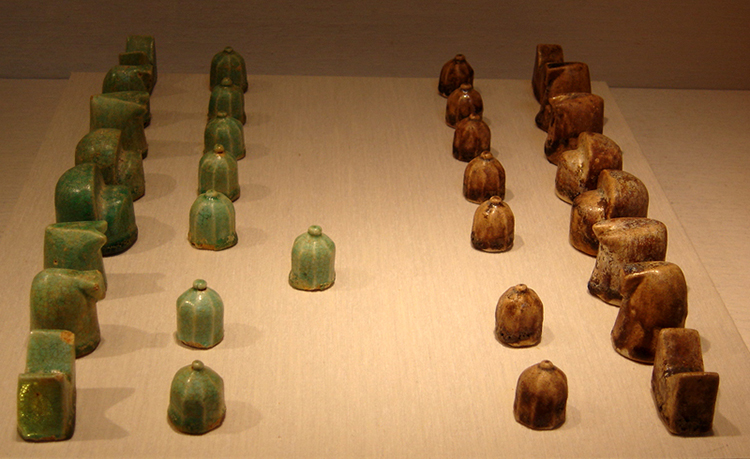 Shatranj appears in Persian historical manuscripts from the 11th century. Many chess pieces from Iran and the medieval Islamic world have survived. These pieces were carved more abstractly than their Indian predecessors, as Islam prohibits the representation of humans in art. While chess had spread westward from India to Persia, it also spread east to China, Japan, and other Asian lands. Variations of chess such as xiangqi in China and makruk in Thailand developed with their own unique rules, often merging or drawing from existing local games. India’s early chess also spread north to modern-day Russia, likely through early medieval traders. 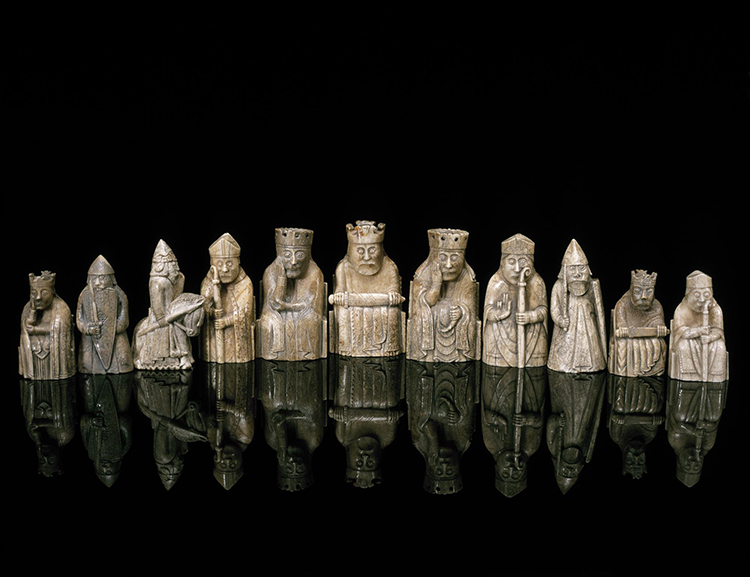 Chess likely arrived in early medieval Europe through interactions with the Islamic lands to the east, as well as the influence of the Islamic Umayyad conquest of Spain and Portugal. Legend tells of King Charlemagne being sent a chess set by Caliph Harun al-Rashid, the eighth-century Abbasid Caliph. While this tale has not been entirely proven, chess clearly spread to Europe quite swiftly and was quickly embraced by the learned upper classes. These people could afford the exquisitely carved ivory pieces and inlaid chess boards which began to be produced by artisans.

Some of the earliest pieces known to have been produced in Europe—rather than imported—are the Lewis Chessmen. In 1831, a farmer on the Scottish Isle of Lewis discovered a medieval horde of 78 chess pieces, in addition to others for backgammon. Experts believe the exquisite figural pieces were crafted in Norway, which controlled the northern Scottish islands at the time. 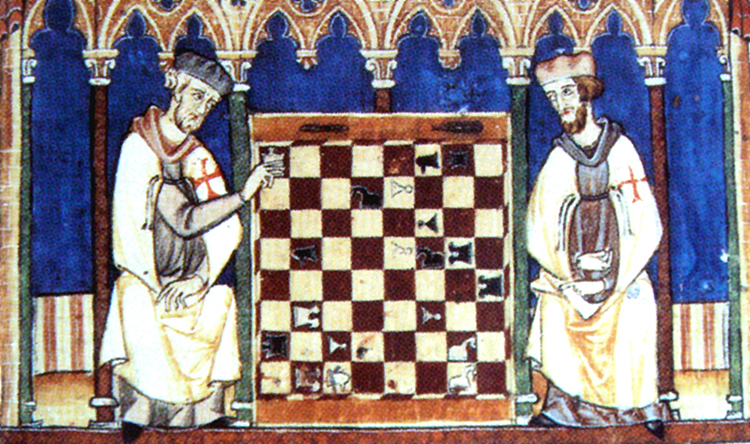 Knights Templar paying a game of chess in a manuscript from 1283. (Photo: Wikimedia Commons [Public domain])

Medieval depictions of chess players swarmed Europe and the Islamic lands. In Europe, gambling on chess became popular and was considered a moral failing. Kings and queens played the strategic game. By the 12th century, the pieces had begun to take their standard modern forms. What was once a minister became the queen, while war elephants had less relevance in medieval Europe than in India. Instead, bishops took their place.

The rules were also evolving: around 1500, the role of the queen and bishops changed and made them more powerful. Known as alla rabiosa in Italian (with the madwoman, or queen), this new style of chess changed the strategies necessary to win. This is typically regarded as the birth of modern chess. 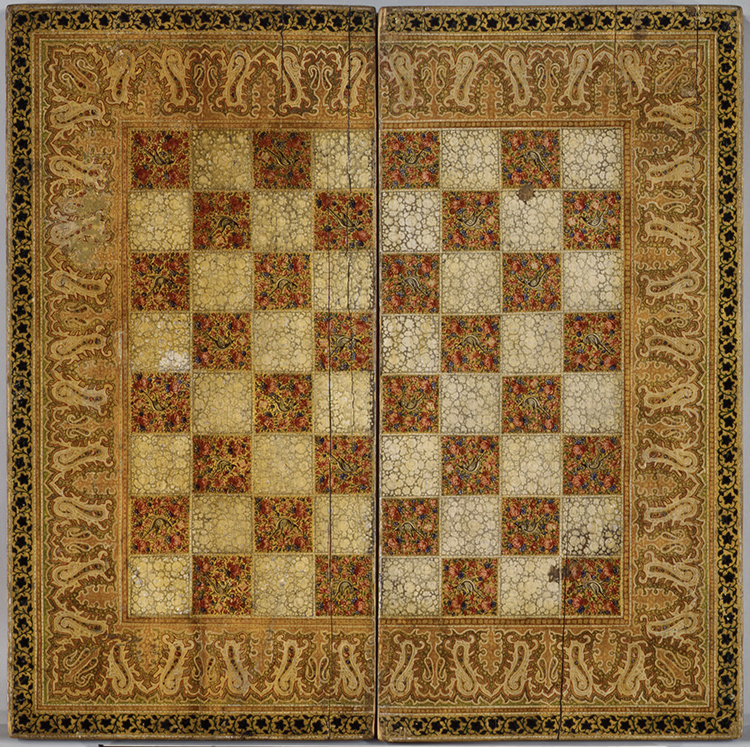 Folding chess and backgammon board from India, circa 1830. (Photo: The Metropolitan Museum of Art [Public domain])

Modern chess continued to be fine-tuned throughout the early modern period. Works of strategy abounded throughout the 18th and 19th centuries, particularly as play became further standardized. In the mid-19th century, some of the first chess tournaments demonstrated the needs for time limits—which were subsequently established. Although celebrated players had long been widely known, established tournaments allowed for more formal play. In 1886, the first official World Chess Championships were held. Prodigies such as Paul Morphy could achieve success at a young age—much like the heroine in The Queen’s Gambit. 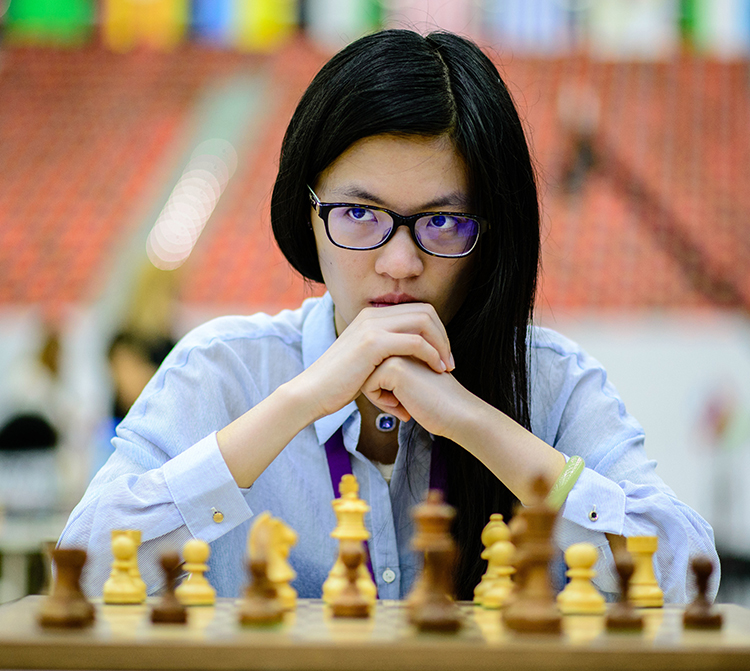 The 20th century saw further standardization, with the establishment of the World Chess Federation in 1924. Women received their own championship tournament in 1927, but the world of premier chess tournaments was largely a masculine scene, as any viewer of The Queen’s Gambit will easily see. While men dominated the chess scene worldwide, after World War II the Soviets dominated the World Chess Championships. Their streak of victories was only briefly interrupted by American Bobby Fischer, whose Cold War success against the USSR sparked a wave of chess mania in the United States.

If you watch The Queen’s Gambit, you will notice that Beth confronts both sexism and surprise—the perils of being a female chess player. The first chess grandmaster title awarded to a woman was in 1978, to Georgian player and Woman’s World Chess Champion Nona Gaprindashvili. In 1998, Judit Polgár—who became a grandmaster at 15—was the first woman to take the lead in a US Open, tying for the win. The record for the youngest female grandmaster to date is held by Hou Yifan, who gained the title at 14. The Chinese prodigy is only 26, and she is the top-ranked female player globally. She is only the third woman to be ranked in the top 100 players globally, reflecting a world that is hostile to women in chess.

An essay for Slate by Wei Ji Ma—a professor of neuroscience at NYU who is also a chess master–explains the difficulties women face in entering and remaining in competitive chess. To this day, many male players (and even a few female players) will claim biological differences. The current head of the Commission for Women’s Chess suggested women are more naturally suited to music and arranging flowers. Professor Ji Ma sets the record straight—no evidence indicates biology is the answer to women’s absence in the absolute top echelon of chess. Instead, gender bias from an early age, lower prize money, and sexist comments by male players all have been documented. For all the young girls out there who may dream of beating the best players in the world like Beth in The Queen’s Gambit, keep playing. In a more equal world, we can hope to see a female World Chess Champion in the open competition.

6 Unique Card Games Played in Different Countries Around the World