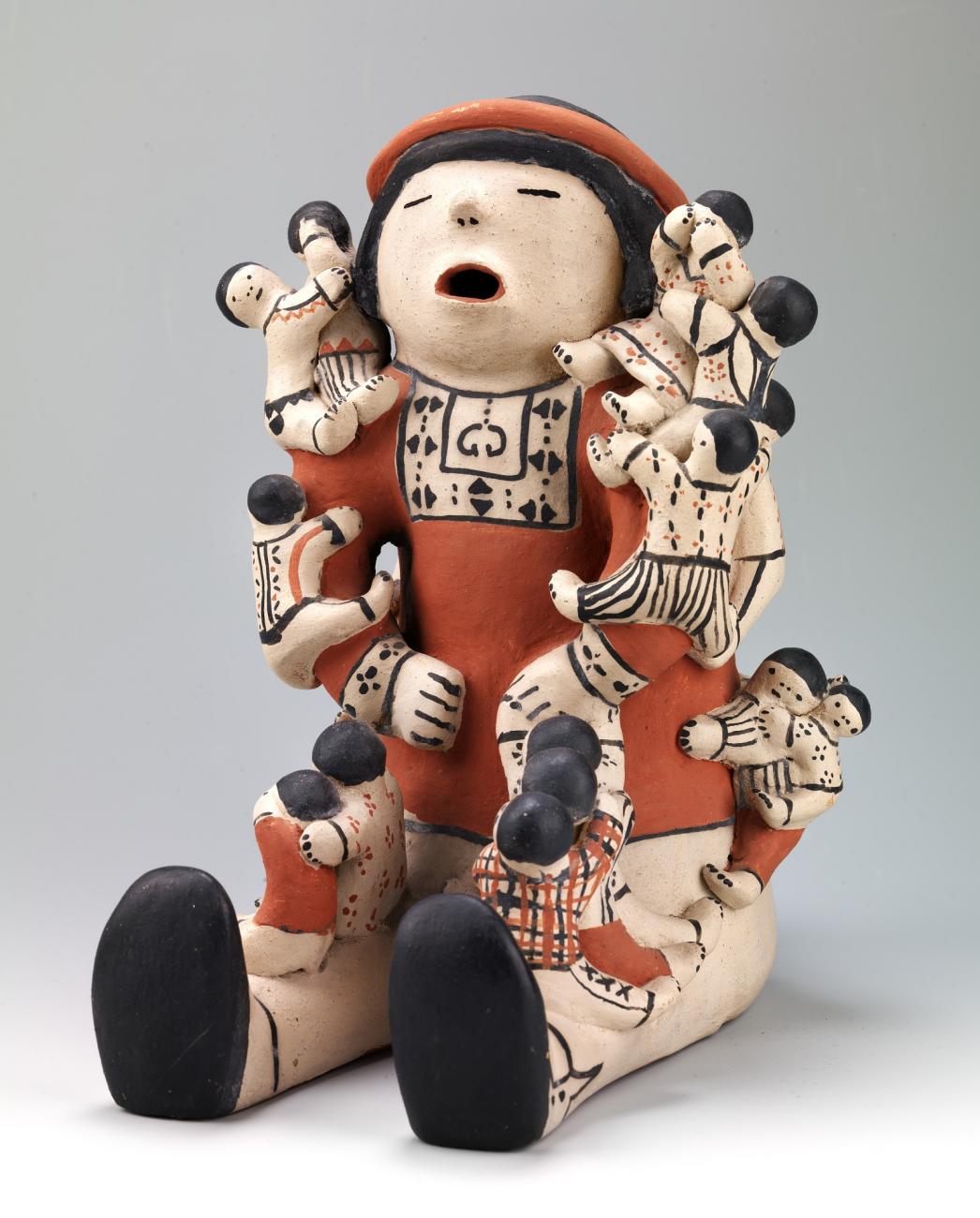 The recent exhibition Hearts of Our People: Native Women Artists celebrated the considerable artistic achievements of indigenous women of North America and establishes their rightful place in the art world. The exhibition inspired us to take a fresh look at artwork by Native women artists in our permanent collection. Here are three of their stories and artworks:

Helen Cordero (1915–1994) was a renowned Cochiti Pueblo potter from northern New Mexico known for her storyteller figures. Cordero invented the ceramic storyteller figurine, and subsequently launched a new tradition in Native American art and changed the course of Pueblo pottery. In the 1950s, she and her cousin, an accomplished potter, began making ceramics.

One of the traditional Pueblo ceramic figurines was a seated figure holding a child, known as Singing Mother or Madonna. When Cordero envisioned creating one, she pictured her paternal grandfather, Santiago Quintana, a known storyteller, surrounded by his grandchildren. She took the seated figure design but made it a male and placed an unusually large number of children on him. She called the work Storyteller. Almost immediately, the storyteller figure brought Cordero public attention—she won awards at the New Mexico State Fair and at Indian arts and crafts shows. Eventually Cordero’s pieces were exhibited at museums across the U.S. and Canada. Her reinvigoration of the Cochiti figurative pottery tradition initiated a revolution in contemporary Pueblo ceramics.

The distinctive features of Cordero’s storytellers are an open-mouthed figure usually surrounded by children, animals, or both. The storyteller can be female or male, a clown, or any type of animal. There is always at least one listener, but there can be an abundance of them encircling the storytelling figure or climbing on its back and shoulder. The open mouth is either painted or sculpted on the storyteller, and sometimes on the listeners as well. The figures often hold significant items such as pottery, drums, and rugs. The Luce Center has Cordero’s Storyteller with Twenty Figures on view. Looking at the front and reverse images of the ceramic work, can you count all twenty children? After the success of her first storyteller in 1964, Cordero would eventually draw from her experience to develop other figurative types including the Hopi Maiden, Water Carrier, Pueblo Father, and Turtle. Other potters have continued to create variations of her Storyteller.

Cordero lived her entire life at Cochiti Pueblo and participated in Pueblo life and traditions. She continued to dig white clay from local pits, prepare her red and black pigments, and work outdoors in warm weather and at her kitchen table in the winter. Her husband and son would drive up to 100 miles to bring home cedar wood to fire her pieces. Cordero was honored as a Santa Fe Living Treasure in 1985 and was a recipient of a 1986 National Heritage Fellowship from the National Endowment for the Arts. 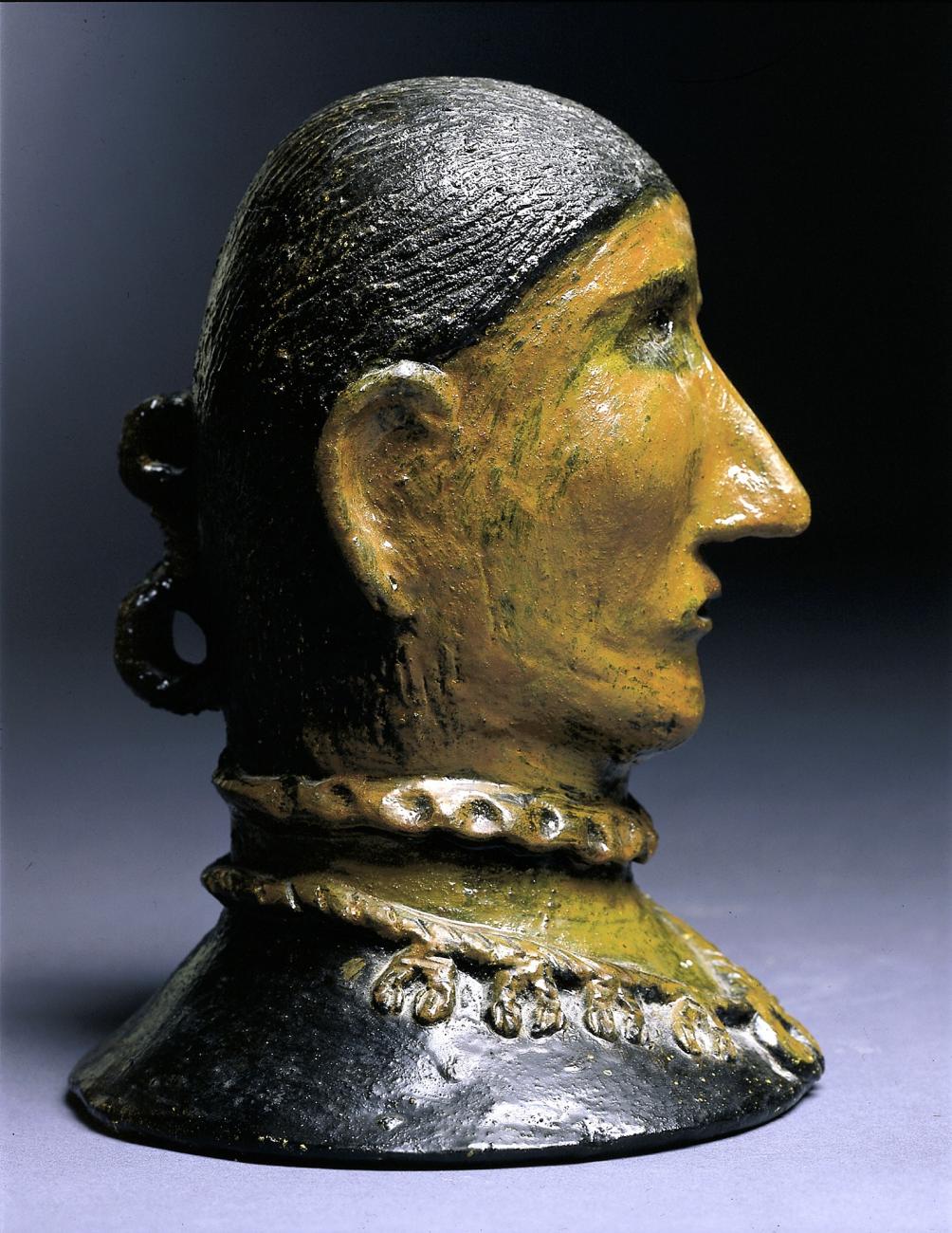 Faye Tso (1933–2004) was a master Diné (Navajo) potter and one of the first Navajo artists to use unconventional imagery in ceramics. Navajo pottery typically has little decoration, but Tso applied images of corn maidens, warriors, and dancers onto her clay surfaces. She was a practicing herbalist as well, and her husband and son are traditional healers who use her pots in their ceremonies, explaining that “fire, cloud, and earth are all part of the Navajo way.”

Tso was born in Coal Mine Mesa, Arizona, but relocated south to Tuba City, Arizona in 1974. She routinely returned to Coal Mine Mesa to dig from her family’s clay pit and gather piñon for the resin that coats and seals her pottery. Three of Tso’s pots are on view in the Luce Center: Pot with Dancers with Headdresses and Rattles (ca. 1985), Pot with Figurative Decoration (ca. 1992), and Bean Pot with Incised Corn Maiden Figures (1987). Each of these pots is made of fired clay and sealed with piñon pitch. The artist decorates many of her pieces with deity figures (Ye’i), corn maidens, and ceremonial scenes of her Navajo worldview. She experiments with different clay slips and often adds the dung of cattle, goats, and sheep to the clay during the firing process, which blocks oxygen from entering the kiln and changes the color of the clay from a golden orange to a deep brown or black.

Tso’s Head of Emmett is a representational work depicting a man’s head and shoulders. His hair is gathered in a traditional Navajo hair bun (tsiiyéél) worn by both women and men. He also wears a necklace, possibly a squash blossom necklace, over his black shirt. Tso named the figure “Emmett” which is the name of her husband and could be the subject of the work.

Myra Tso Kaye (born 1961) is a Diné (Navajo) artist and the daughter of Faye Tso. She studied art at the University of Northern Arizona in Flagstaff but felt her schooling only taught her the ‘scientific’ side of her artwork. Kaye believes that the spiritual side came from her home and family—her grandfather, father, and brother are all traditional healers, and her mother was a potter and herbalist. Two pots by Kaye are on view in the Luce Center: Bean Pot with Ear of Corn Applique (1988) and Ram Pot (1992). Kaye’s Ram Pot is in the shape of a double-necked water pitcher, but one spout has been replaced with a ram’s head (note the detailed large, curved horns). The pot’s body also has incised petroglyph images of rams (male bighorn sheep), similar to ancient etchings found throughout the American Southwest.

Other artists in SAAM’s collection who have work featured in Hearts of Our People include Edmonia Lewis, Maria Martinez, Christine McHorse, and Marie Watt. You can explore selected artworks from the exhibition and artist interviews online.