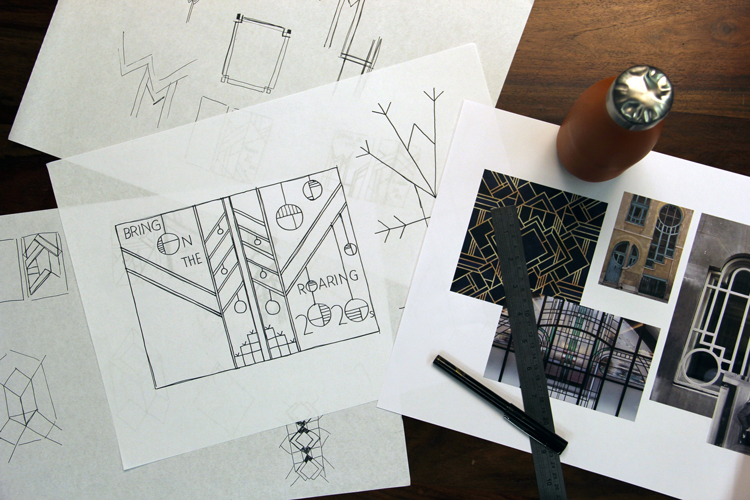 Christmas decorations can be contentious. Coloured lights? Real or fake Christmas trees? Tinsel or no tinsel? Whatever you decide for your home, you can rely on designers to come up with some inventive aesthetic choices for their studios. Here we’ve rounded up some of our favourites.

Free the Birds, based in London, wanted to create an “alternative to the traditional, tinsel-clad tree” while also keeping the magic of Christmas alive in the studio. The spirit was realised through “glorious wintery colours” — note the gold leave, red berries and soft mossy branches. It features real foliage with a twinkly (not real) bird and is finished off with feathery baubles. Placement is important; it’s not been banished to a corner but elevated to the ceiling. Bonus points: it apparently smells fantastic, like a “shimmery woodland”.

Williams Murray Hamm, also based in London, is taking a decidedly less natural look, instead embracing the glitz and glamour of the 1920s. It’s an attempt to put the last few years of “uncertainty and general gloom” behind and look forward to the next year with pizzazz, the studio says.

The windows are decorated with patterns, featuring Christmas trees, baubles, snowflakes and presents. Will we see a resurgence of 1920s style in design this year? It was part of the identity for 2024’s Paris Olympics — fitting for the city where Art Deco originates. Either way, the studio hopes that this window display will be a good omen for things to come: “Let’s hope the 2020s will be a new era of creativity and prosperity just like the 1920s was!”

Kingdom and Sparrow, a branding and design consultancy based in Cornwall, went for a more traditionally festive design with its paper-craft installation. Reminiscent of a Christmas card pattern — both in look and papery texture — it adds an exclamatory display to the studio’s interior.

In green and reds, Christmas foliage has come to life through the textures; spot the berries, mistletoe and holly. The display adorns the entrance hall of the studio — in Falmouth’s original School of Art building — and also frames another holiday favourite: the beer fridge.

Something a little different comes from Cambridgeshire, courtesy of graphic design studio Avidd, who took the Christmas spirit outside. Noticing that a festive favourite — a robin — had made a home in the studio’s garden, the team decided to decorate a tree in style and create a home for the bird and his friends.

Avidd designed boxes and commissioned a local woodworker, Kei Phillips, to build the feeders and bird boxes. They’re a distinctive teal shade, which the team says “adds a bit of colour to a very grey day”.