Immigrant Who Learned English From Alex Trebek Are Sharing Stories

Longtime host of the quiz show Jeopardy!, Alex Trebek, touched many lives. The TV legend passed on November 8, 2020 at 80 years old, after a long battle with pancreatic cancer. Trebek became the host of Jeapordy! in 1984, his calm demeanor and iconic voice projecting into households around the globe. For immigrant families in particular, he was much more than a beloved television personality. The popularity and format of Trebek’s syndicated show helped many new immigrants learn English, improve their pronunciation, and discover their place in American culture. In response to his recent passing, an outpouring of stories from immigrants young and old has demonstrated the special place Trebek held in many hearts.

For generations, many immigrants have learned English through American television programs. TV shows can be a free—and non-judgmental—way to learn vocabulary, syntax, and pronunciation. Jeopardy! seems to have been a popular choice for English-language learners. Asmae Toumi, who emigrated from Morocco as a child, says that Trebek’s show not only helped her learn English, but it also helped her understand American culture. “He was one of the first people I ‘met’ in this country,” she told NBC News.

Sam Bautista, the child of immigrants from the Philippines, had a similar experience. Through the TV screen, Trebek helped her mother feel confident in her English. She says she and her sister learned about competition and fairness from iconic host. Specifically, she says, “He never made you feel stupid for being incorrect, and I think that was huge for us.” Many immigrants face anxiety from being harassed for their pronunciation, but Trebek’s grace seems to have been part of his appeal to new Americans.

Before his passing, Trebek even had a chance to hear a similar story from contestant Burt Thakur, who told the host, “I learned English because of you..My grandfather who raised me…I used to sit on his lap and watch you every day.” Although he is now gone, Trebek will never be forgotten by the immigrant families his show reached over the decades.

The late, legendary Alex Trebek’s memory is being honored by immigrants who learned English through his show Jeopardy! 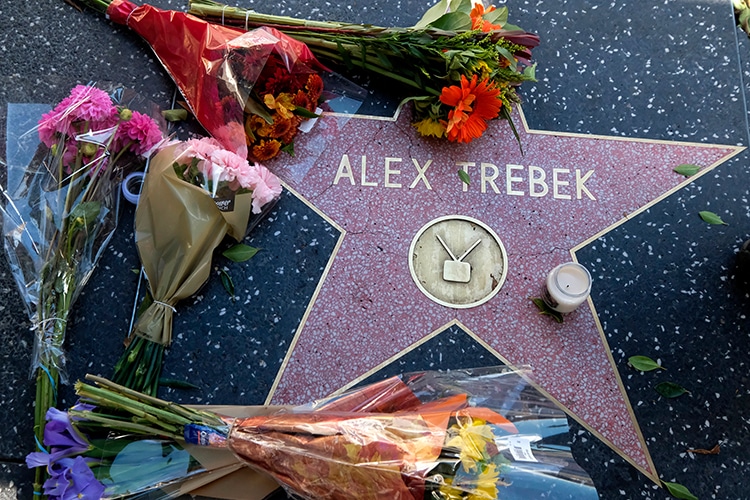 RIP Alex Trebek: Fans React To the Loss of the Legendary ‘Jeopardy!’ Host With Art

Celebrating the Late Tamara Djurovic, AKA Hyuro, and Her Sincere, Monumental Murals