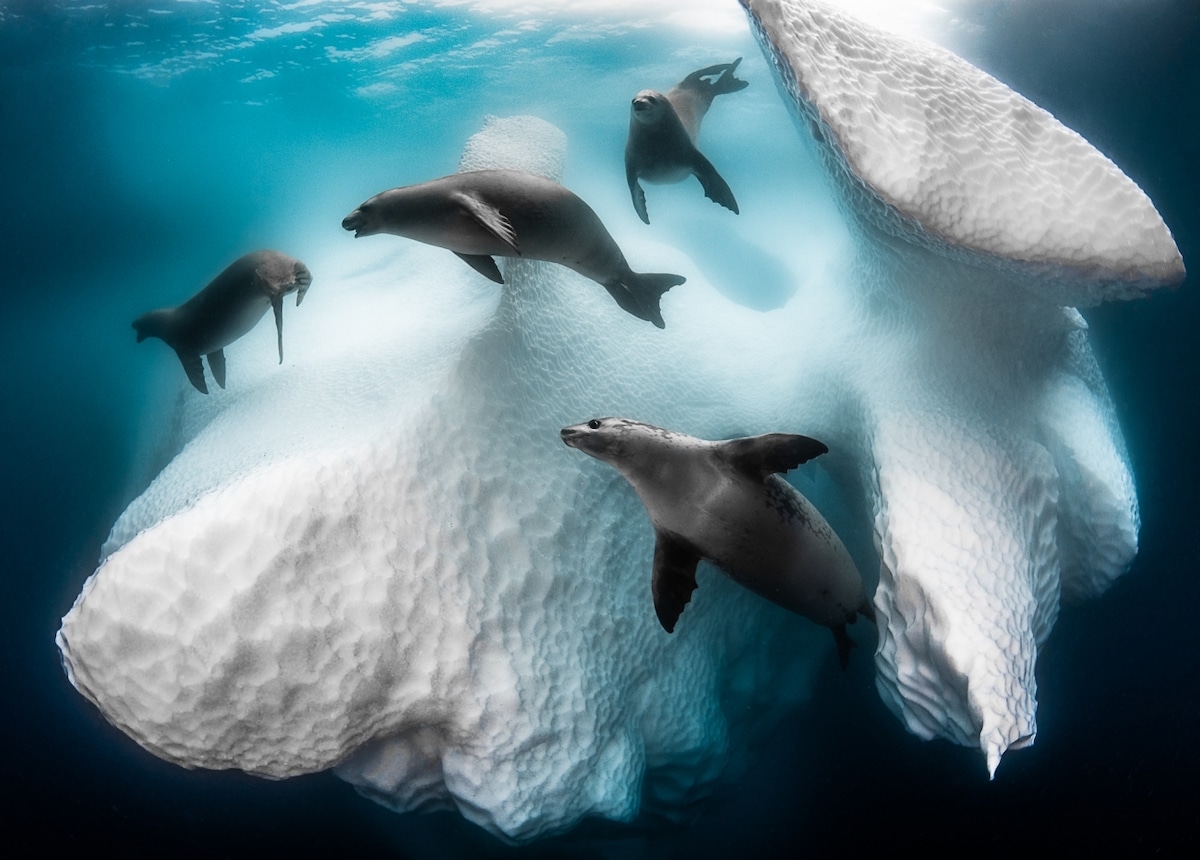 “Frozen Mobile Home” by Greg Lecoeur. Photo of the Year.
“Massive and mysterious habitats Iceberg are dynamic kingdoms that support marine life. As they swing and rotate slowly through polar currents, icebergs fertilize the oceans. Carrying nutrients from the earth, they are responsible for life blooms by developing phytoplankton and inﬂuence the carbon cycle by sequestering carbon dioxide from the air. They also thus shelter big animals such as Crabeater seals that spend the entire year on the pack ice.”

French photographer Greg Lecoeur has added yet another title to his long list of awards by winning Photo of the Year in the 2020 Siena International Photography Awards. His incredible image of Crabeater seals frolicking around an iceberg in Antarctica won out over tens of thousands of photographs entered into the contest. His is just one of many stellar images that were singled out in the annual contest.

South African photojournalist Brent Stirton also saw his work acknowledged with the Best Author Award. Stirton works tirelessly to tell stories about issues related to wildlife and conservation. His series Pangolins in Crisis, which focuses on the plight of the world’s most illegally trafficked mammals, also won the Storyboard category. Other familiar names like Tobias Friedrich and Christian Vizl were awarded for their beautiful underwater photography.

But the Siena International Photography Awards covers more than just wildlife and animal imagery. Across ten categories, work documenting sports, breaking news, architecture, and street photography was also highlighted. This includes a stunning portrait of dancer Koichi Omae by Silvia Alessi, which won the Fascinating Faces and Characters category. Alessi’s photograph captures the tenacity and strength of Omae, who continues his dance career even after a car accident resulted in his left leg being amputated.

At look at the winners proves that, even in this difficult year, creativity is still alive. Nothing demonstrates this more than the fact that this year’s contest saw a record number of participants. Nearly 48,000 images from photographers in 156 countries tried their hand at the sixth edition of the contest. The winning images are on display until November 29 in the Imagine all the People Sharing all the World exhibition in Siena, Italy. In the meantime, next year’s contest is already taking entries. Photographers have until January 10, 2021 to submit their work.

Enjoy the incredible winners of the 2020 Siena International Photography Awards. 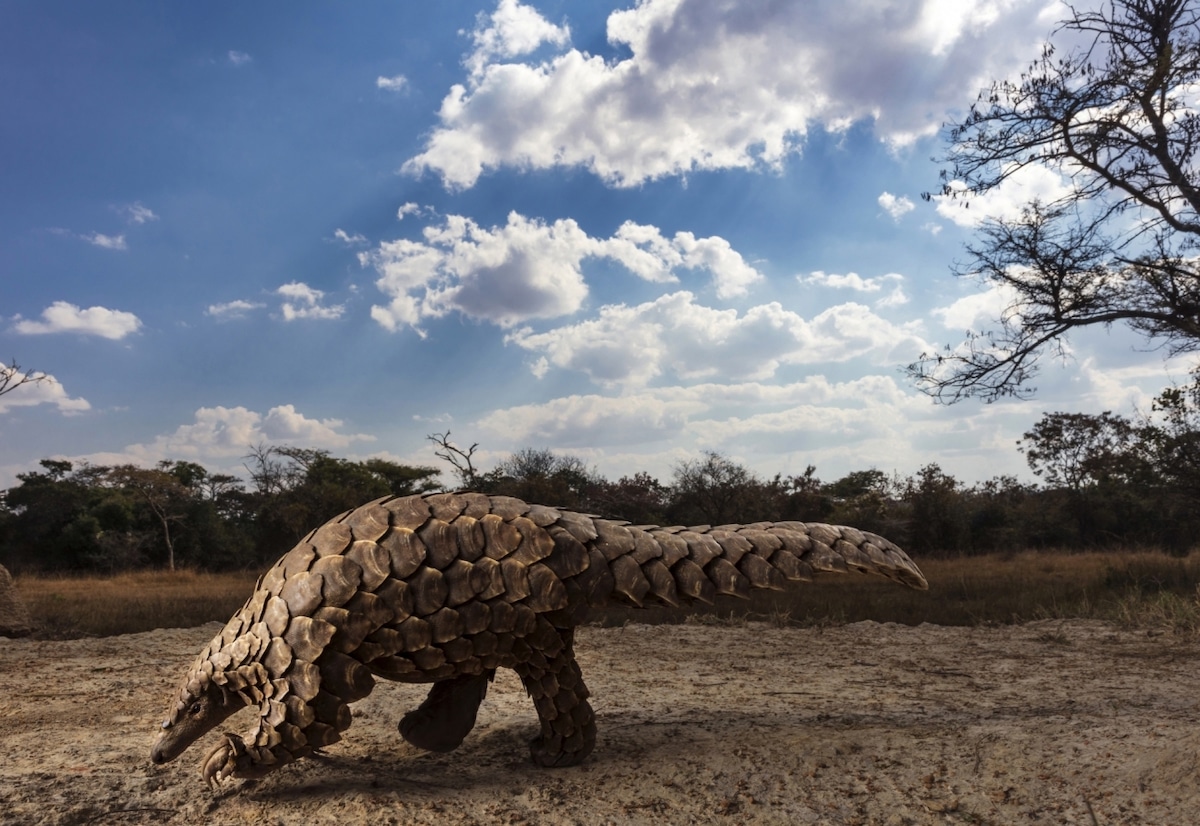 “Pangolins in Crisis” by Brent Stirton. First Place, Storyboard, Best Author Award.
“Pangolins are the world’s most illegally trafficked mammals, with an estimated one million being trafficked to Asia in the last ten years. Their scales are used in traditional Chinese and Vietnamese medicine and their meat is sold as a high-priced delicacy.” 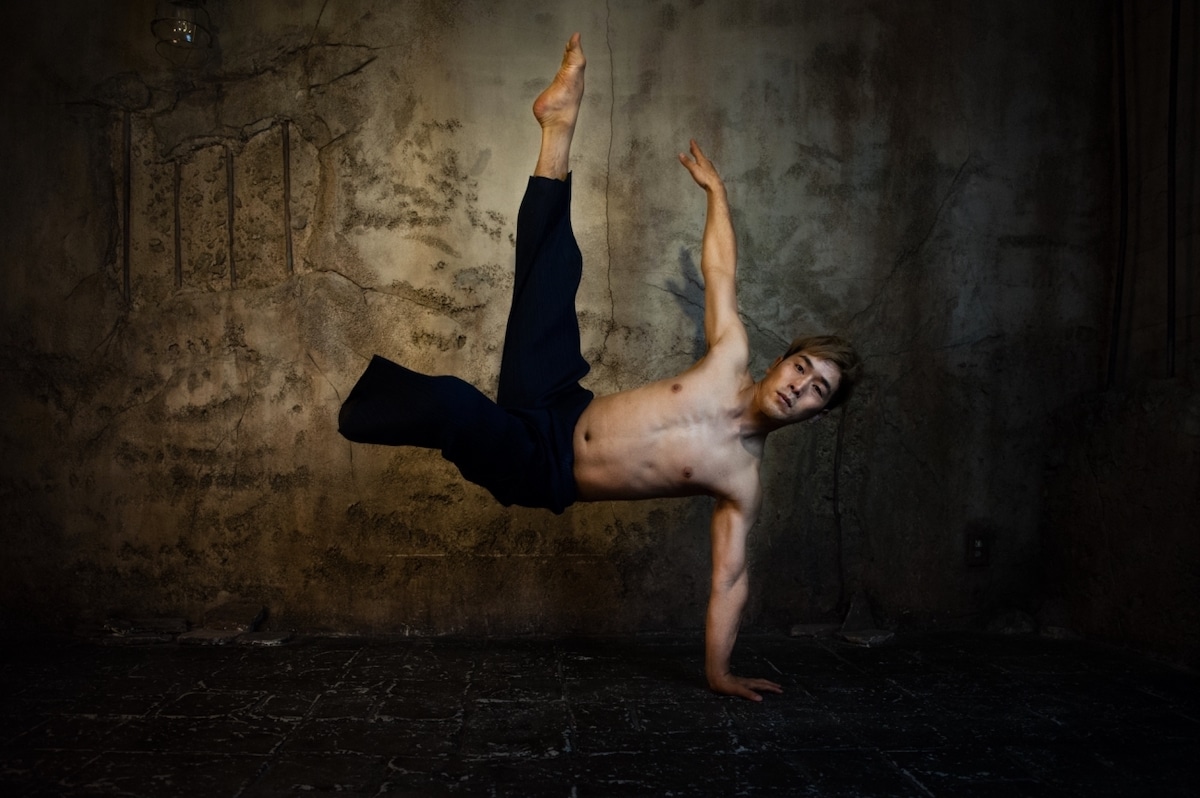 “Koichi Omae” by Silvia Alessi. First Place, Fascinating Faces and Characters.
“I met the amputated dancer Koichi Omae, originally from Osaka, on my way. At 23, when he was entering his career, a car accident took away all his dreams. He had his left leg amputated below the knee. With great willpower, he decided to continue his career as a dancer, aware that without the limb, he would have to spend much more energy not only in performing the artistic gesture but also just walking normally.” 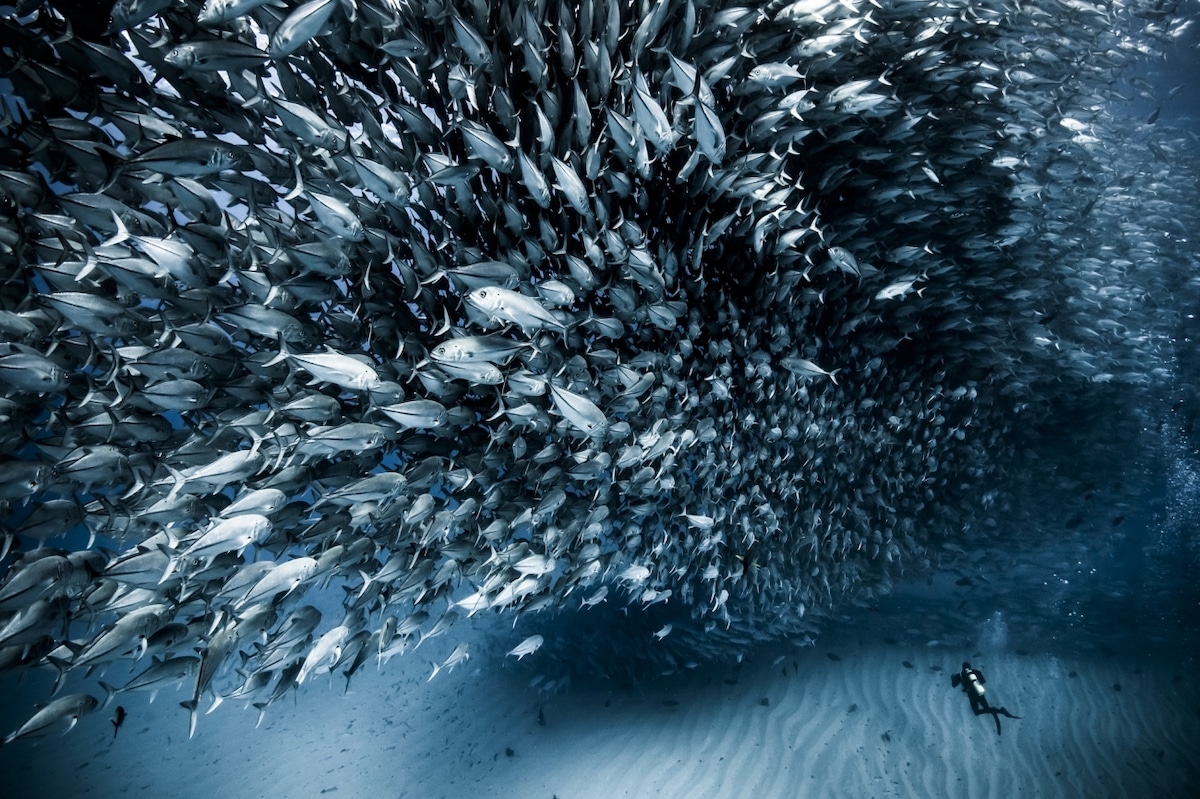 “Diver and Jacks at Cabo Pulmo” by Christian Vizl. Third Place, Journeys & Adventures.
“I heard stories about the thousand of jacks swimming together at Cabo Pulmo, but nothing could have prepared me for actually entering the water and find this spectacular sight. I was really amazed! and for a time, I just float there and enjoyed them. So in this time, a diver in my group was already at the bottom, some 60 feet below. I usually don’t put divers in my photos, but in this case I thought it would.” 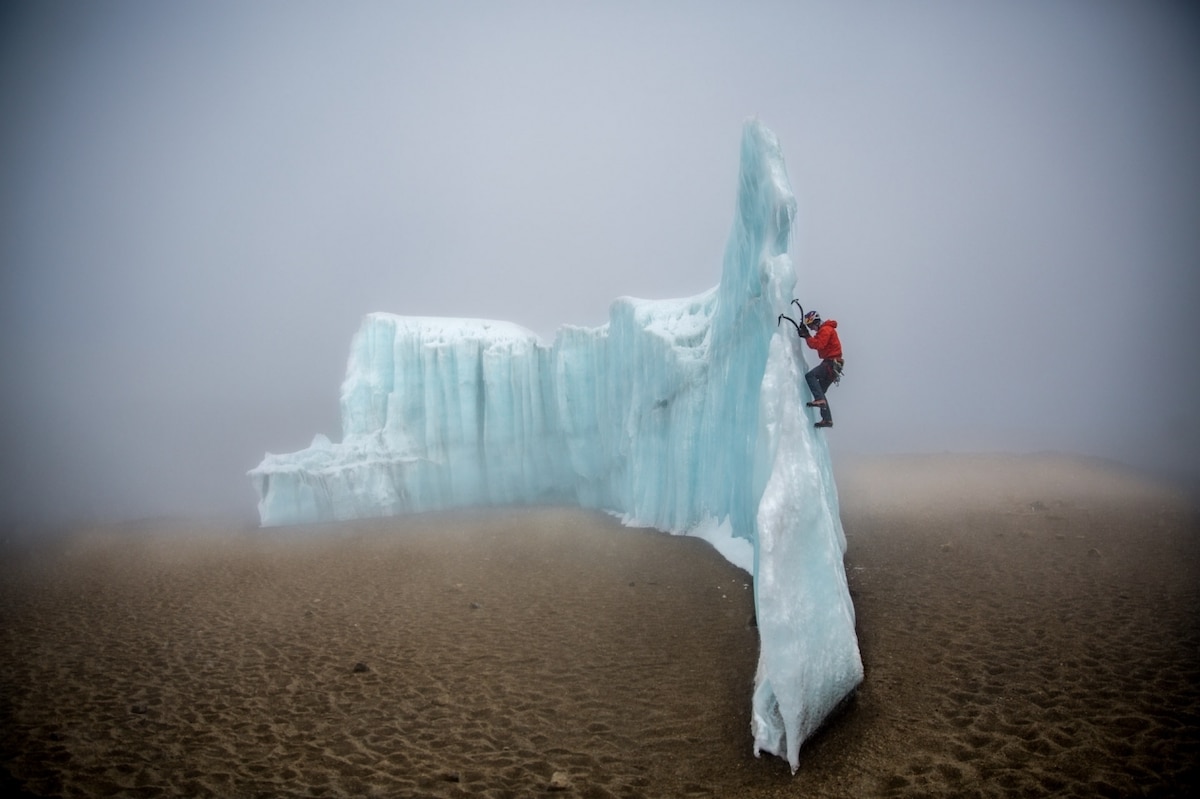 “Desert Ice” by Christian Pondella. Second Place, Sports in Action.
“Professional ice climber Will Gadd climbing on the remaining glacial ice on the crater of Mount Kilimanjaro. This ice is freestanding and looks like icebergs on the sand.” 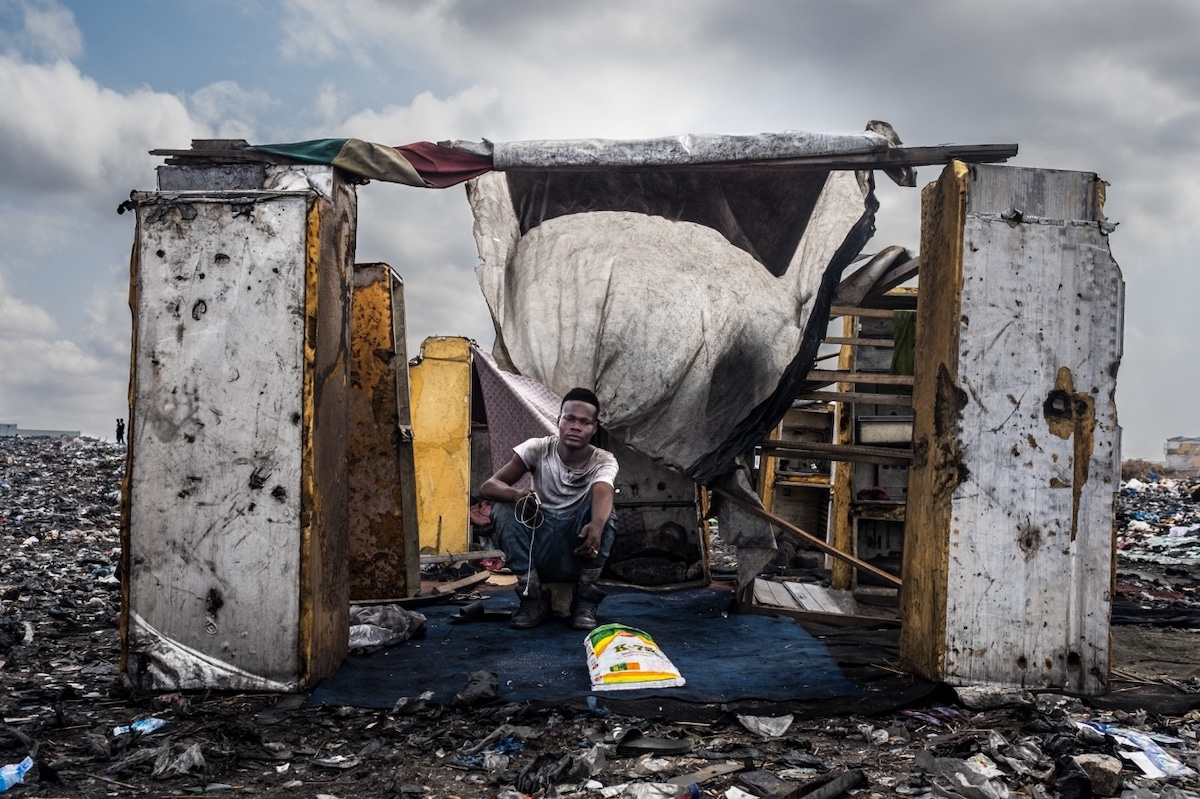 “Burning Dreams” by Carolina Rapezzi. Third Place, Storyboard.
“Despite the Basel Convention – brought into effect in 1992 and designed to reduce and prevent the trade of hazardous waste from developed to less-developed countries – the Agbogbloshie scrapyard in Accra, Ghana, has become one of the biggest open-air electronic waste dumps in the world. Discarded appliances, such as phones and computers, arrive as second-hand goods, mainly from Europe. However, most of these items are beyond repair and end up being dismantled and burnt in Agbogbloshie. Workers process this waste to extract raw materials like copper and aluminum for resale. The whole process is unregulated, without any form of health and safety or environmental control.” 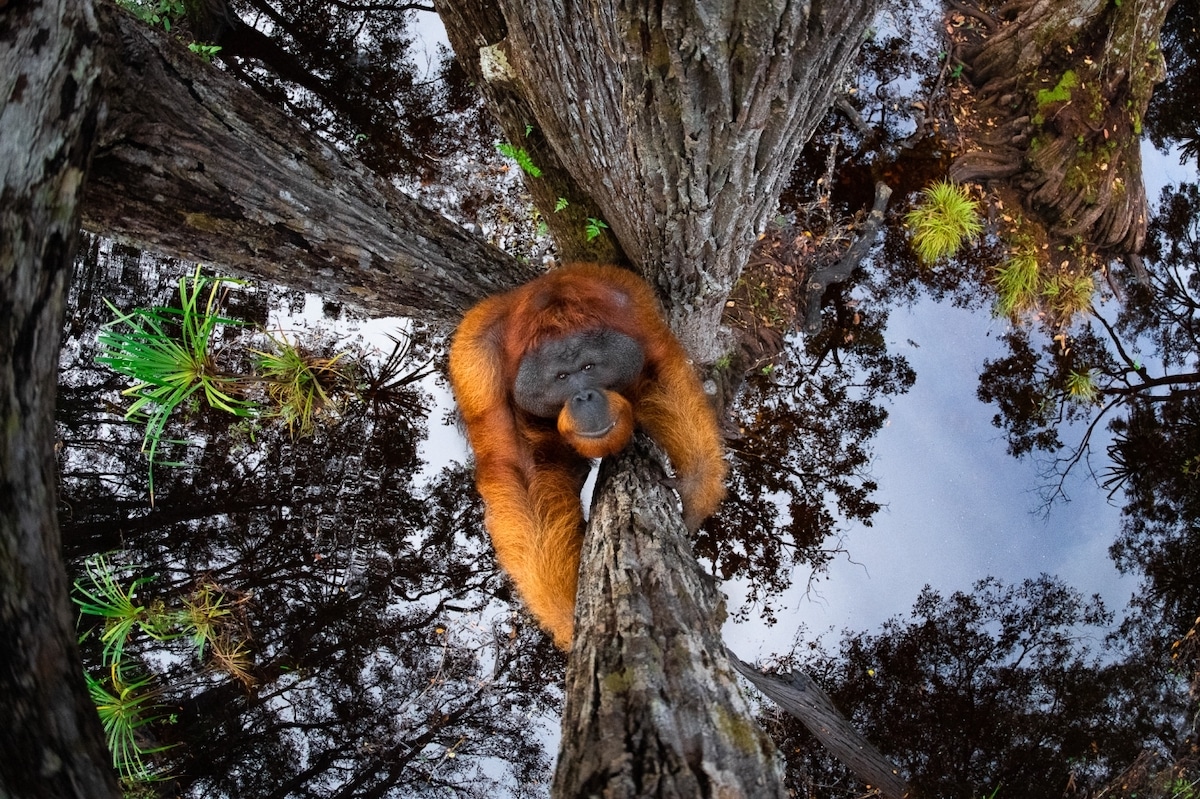 “The World is Going Upside Down” by Thomas Vijayan. Second Place, Animals in their Environment.
“The name orangutan means “man of the forest” in the Malay language. There are 3 varieties of Orangutan, the one in this picture is Bornean Orangutan (Pongo pygmaeus). Adult male orangutans can weigh up to 200 pounds. Flanged males have prominent cheek pads called flanges and a throat sac used to make loud verbalizations called long calls. They mainly feast on wild fruits like lychees, mangosteens, and figs, and slurp water from holes in trees.” 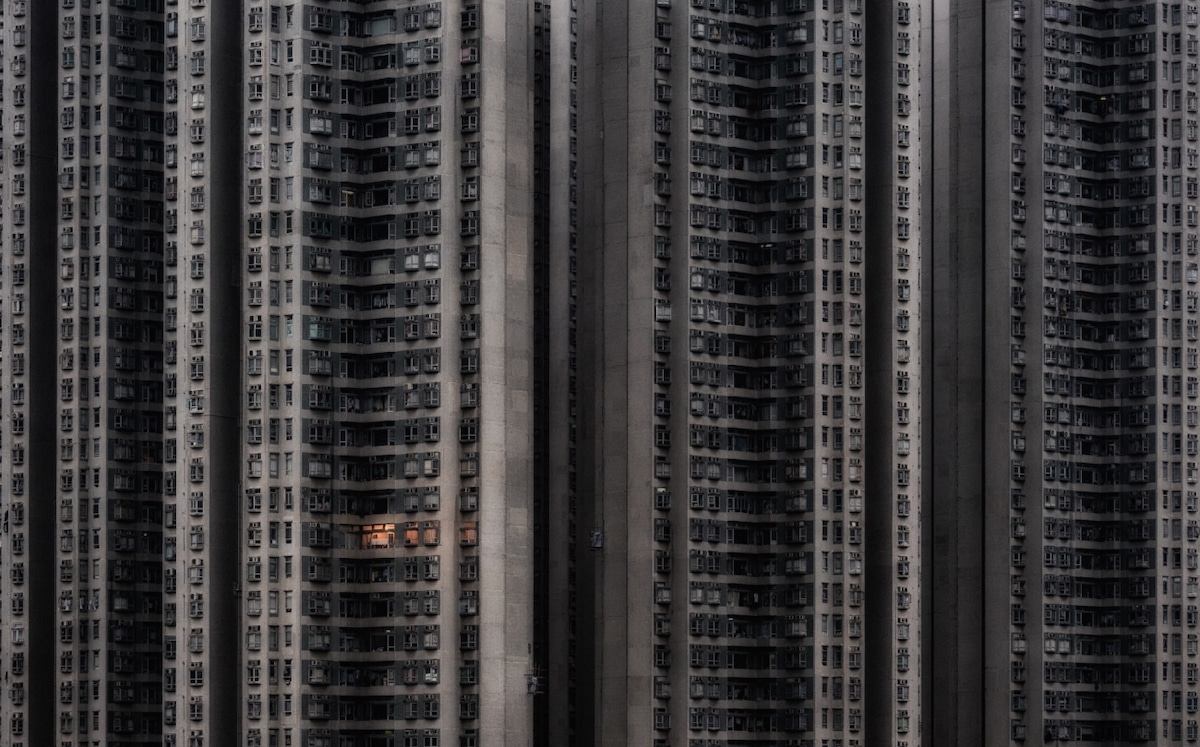 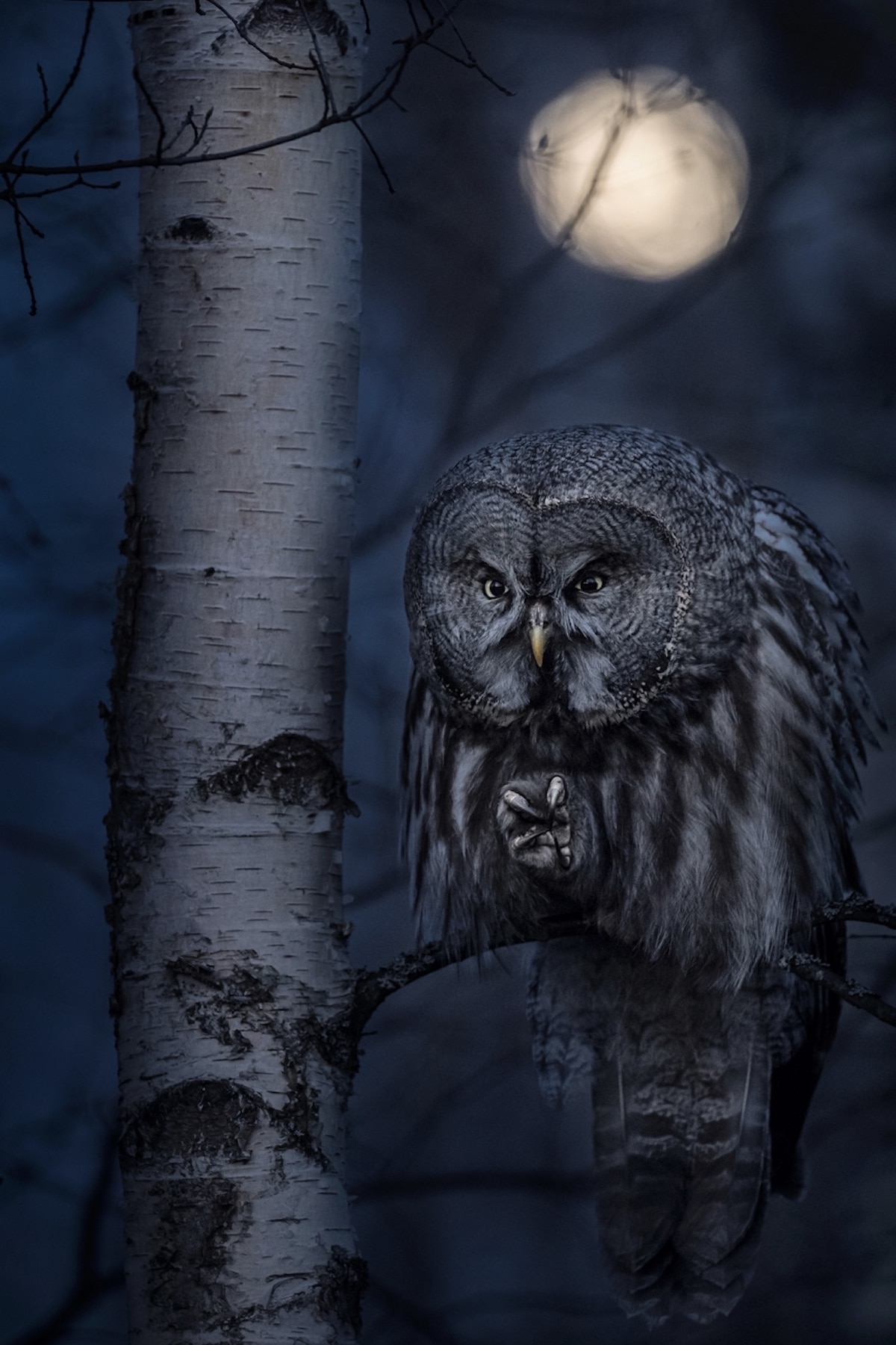 “Night Hunter” by Jonas Classon. First Place, Animals in their Environment.
“The Great Grey Owl is well known for its extreme hunting skill. After working on a story about this owl for many weeks in a row I finally got a picture that told all I wanted to show in just one frame. I captured the owl seconds before it attacked a vole under the full moon. It’s truly a hunter of the night.” 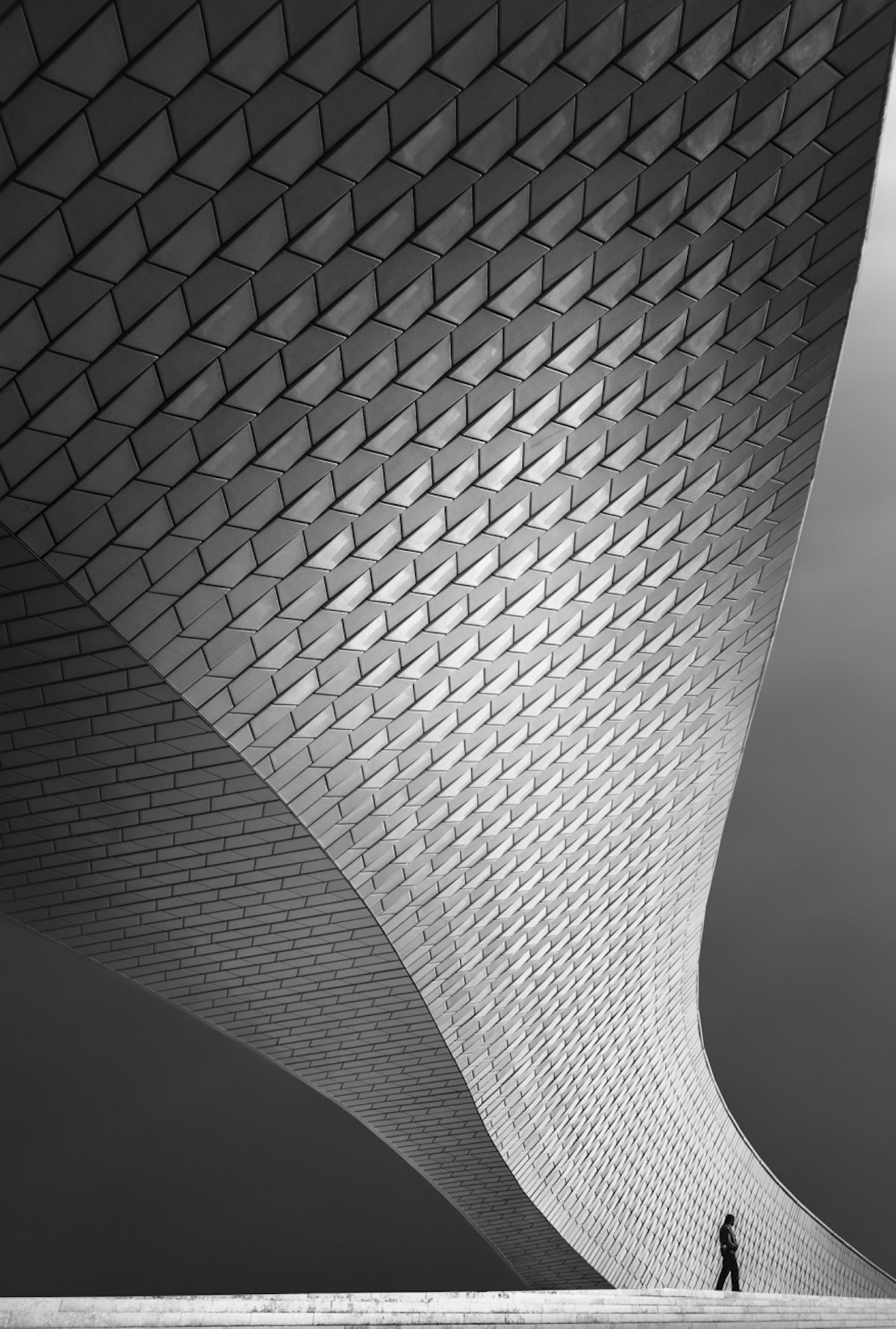 “Security Man” by Martin Seraphin. Third Place, Architecture & Urban Spaces.
“It was still very early and the Museum Maat was still closed. But the guard was already walking slowly along the building. There was only a narrow path between the building and the river Tejo and I got wet feet when I took the picture with 12mm.” 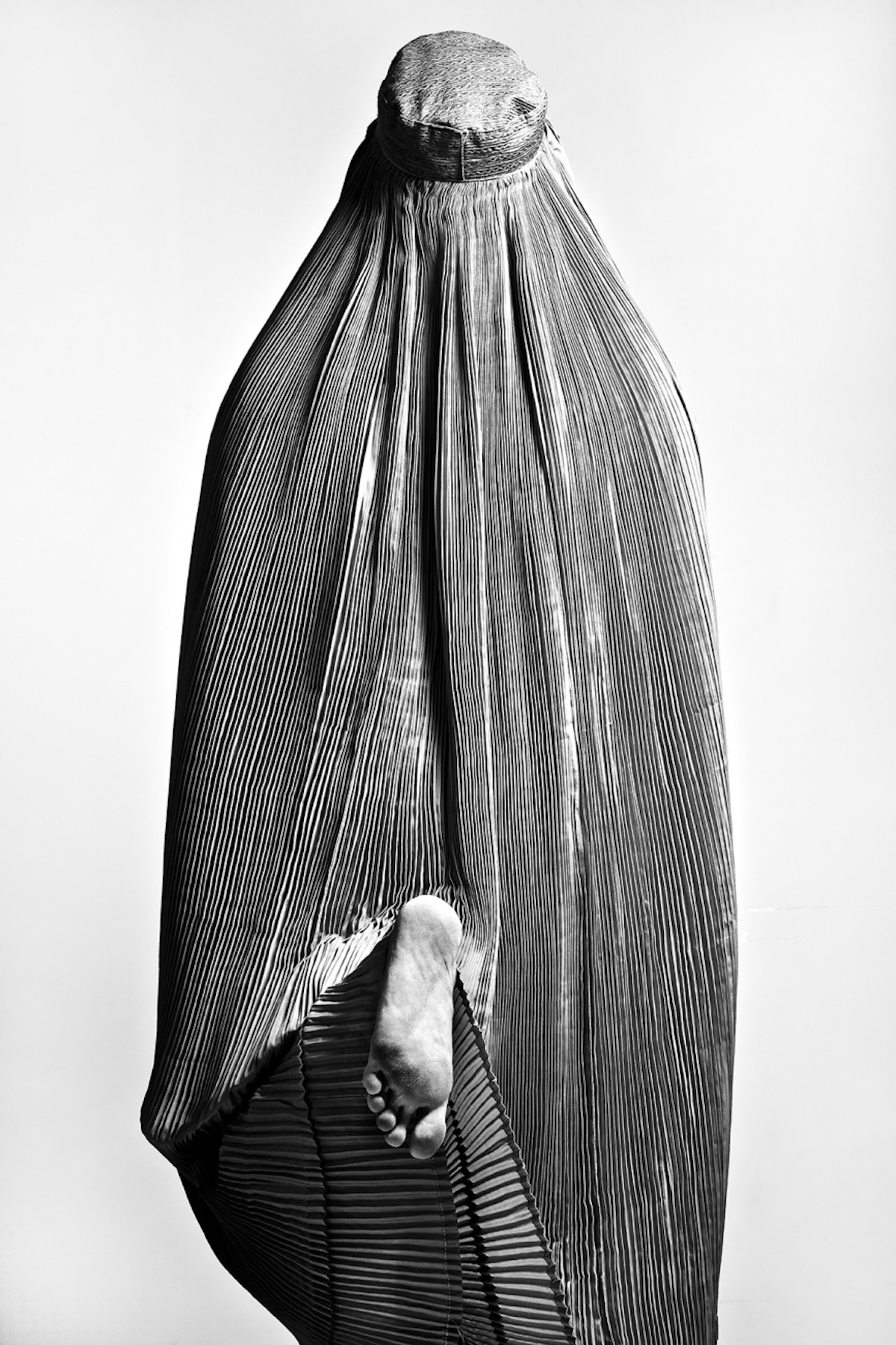 “Taboo” by Fattah Zinouri. Second Place, Fascinating Faces and Characters.
“I took this photo inside my home studio in Iran while I was working on a movie project about Afghan immigrants living in Iran. It was the first time that I witnessed in person someone wearing a burka. What struck me immediately upon seeing this woman was that I couldn’t see any part of her body except the soles of her feet as she walked. Since I captioned this photo as “Taboo”, the message I am expressing is one of rebellion.” 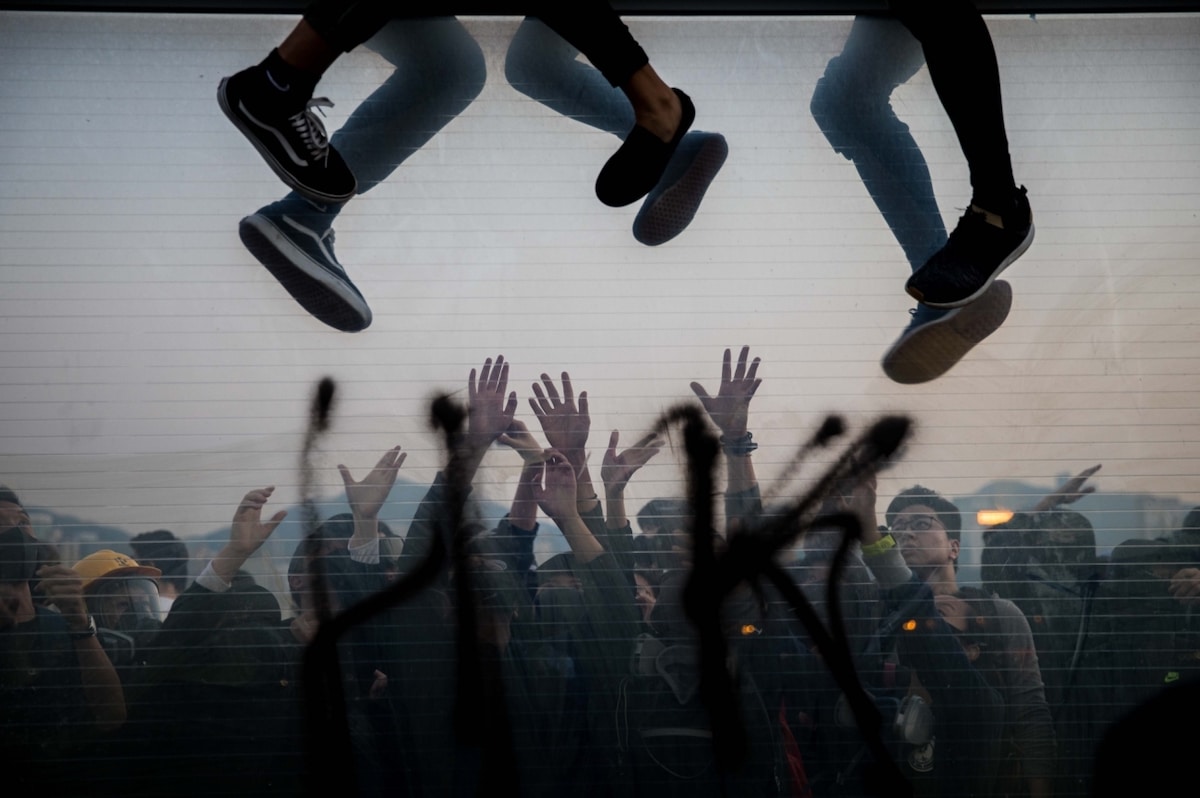 “Escaping” by Shawn Yuan. Third Place, Documentary and Photojournalism.
“Fleeing protesters climb over a highway barricade to evade an approaching police vehicle while others reach out in support from the other side during a march in Hong Kong on December 1.” 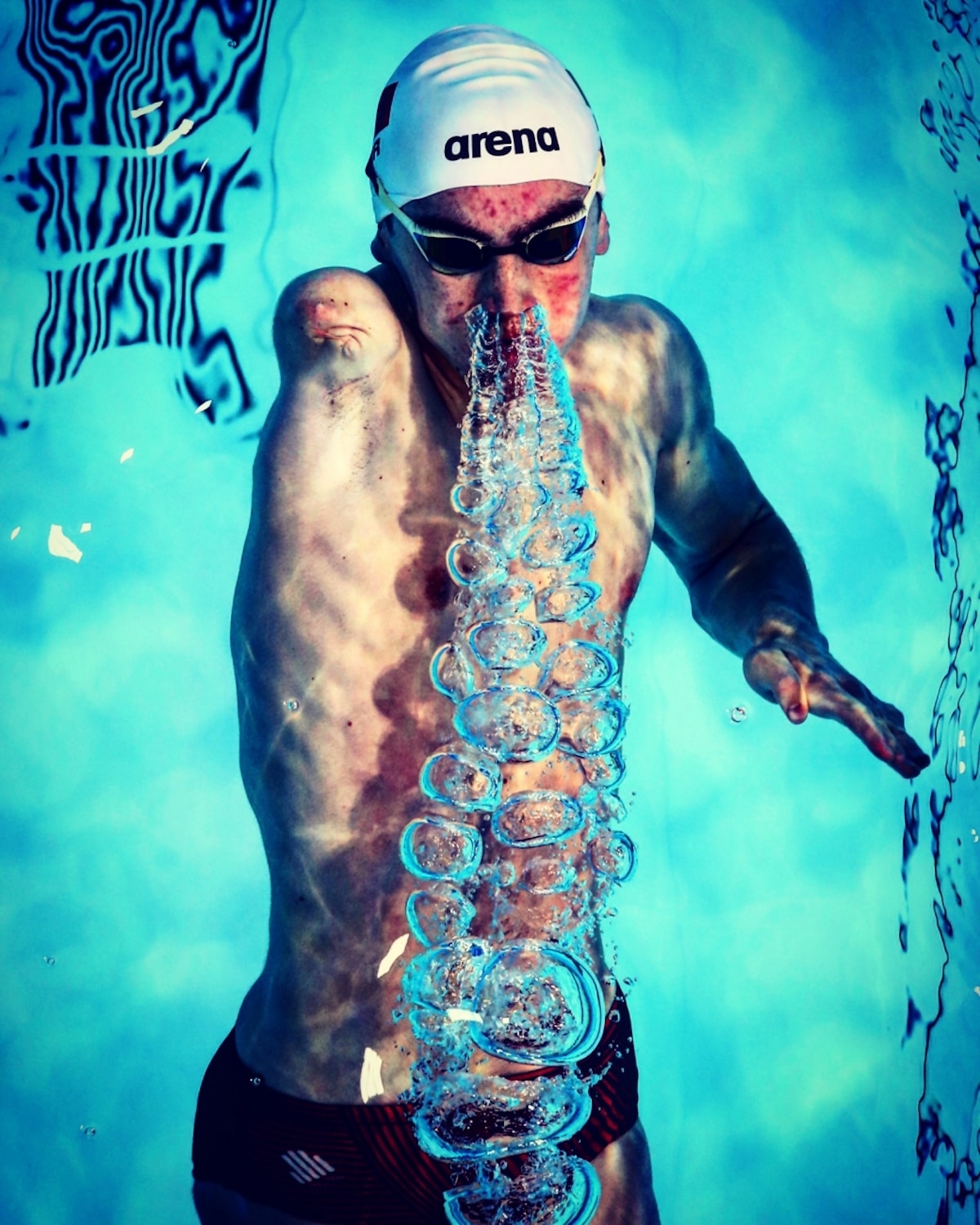 “Diogo Cancela” by Ian Macnicol. First Place, Sports in Action.
“Diogo Cancela of Portugal is seen during practice prior to day three of the British Para-Swimming International meet including the WPS World Series at Tollcross International Swimming Centre on April 27, 2019 in Glasgow, Scotland.” 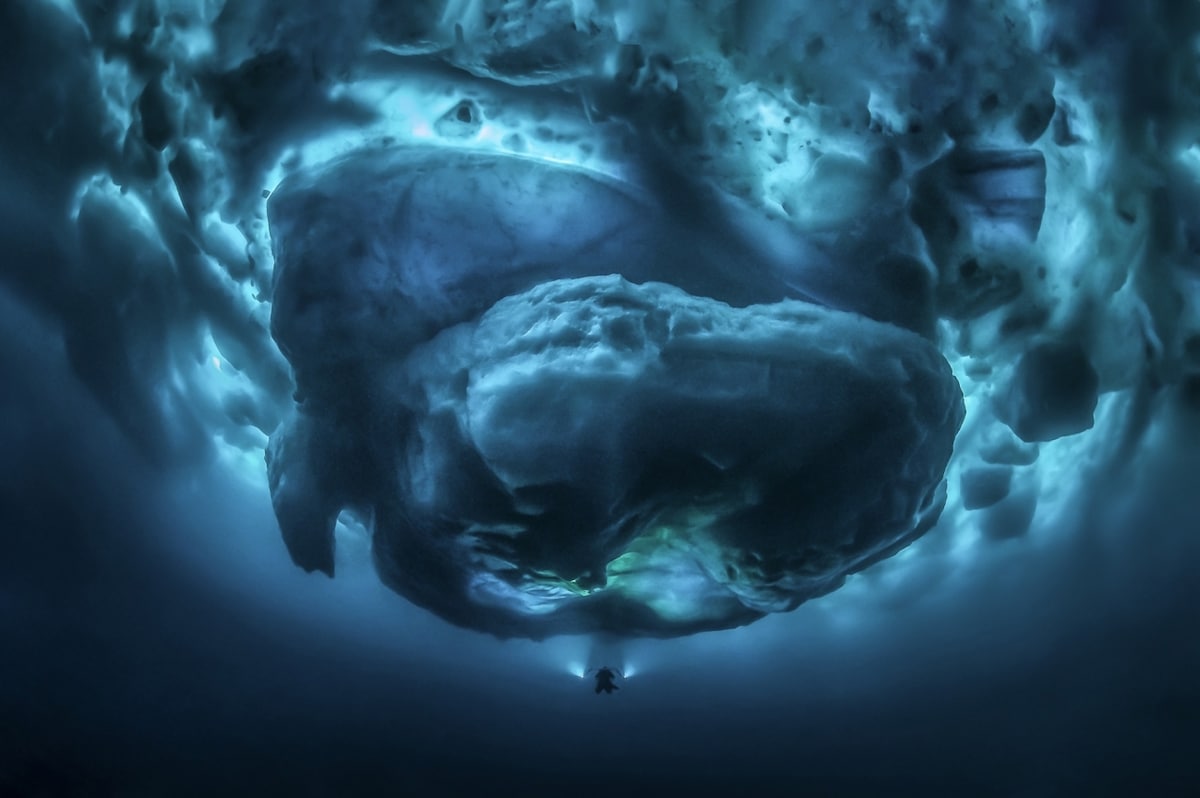 “Sub Zero” by Tobias Friedrich. First Place, The Beauty of Nature.
“Diver with lights in minus two degrees Celsius water in East Greenland under the ice in a frozen fjord swimming around icebergs.” 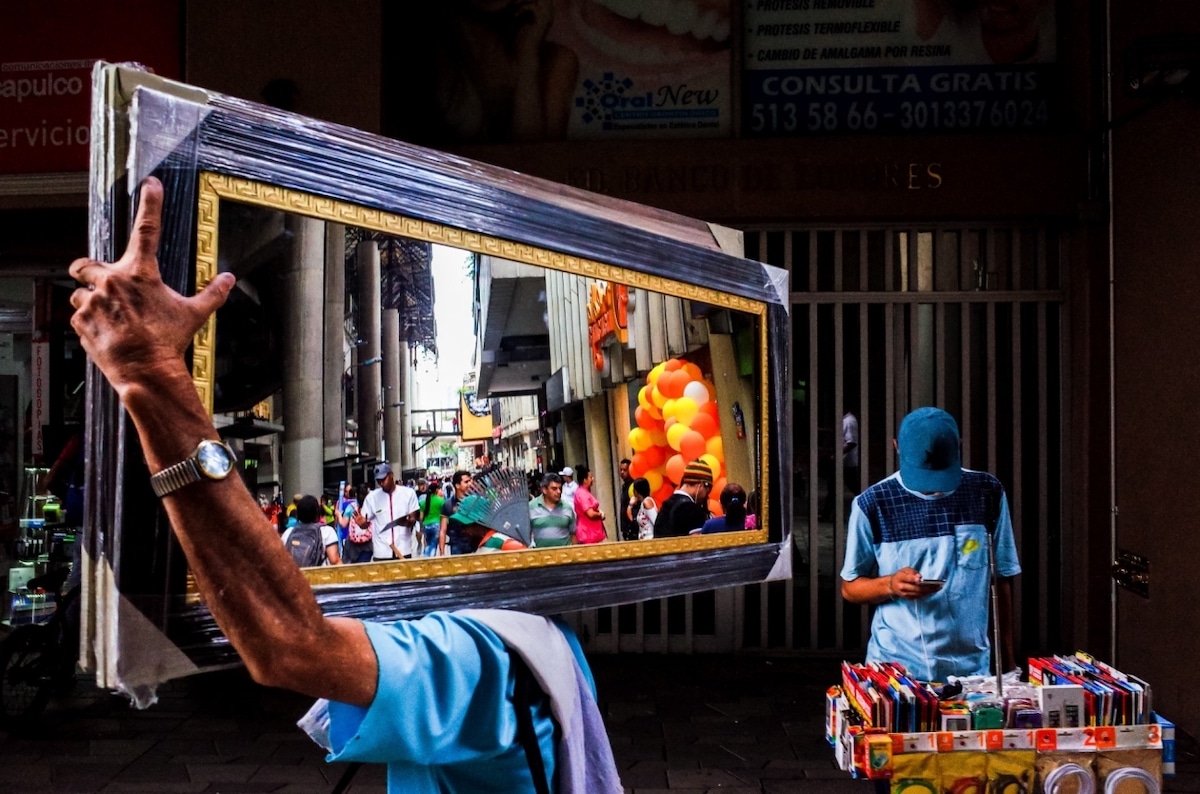 “Medellin Mirror” by Michael Kowalczyk. Second Place, Street Photography.
“A man with a blue shirt is carrying a big new rectangle-shaped mirror on his shoulder along the street and passes a man with a blue shirt standing behind a sale stand with cellphone accessories in Medellin, Colombia.” 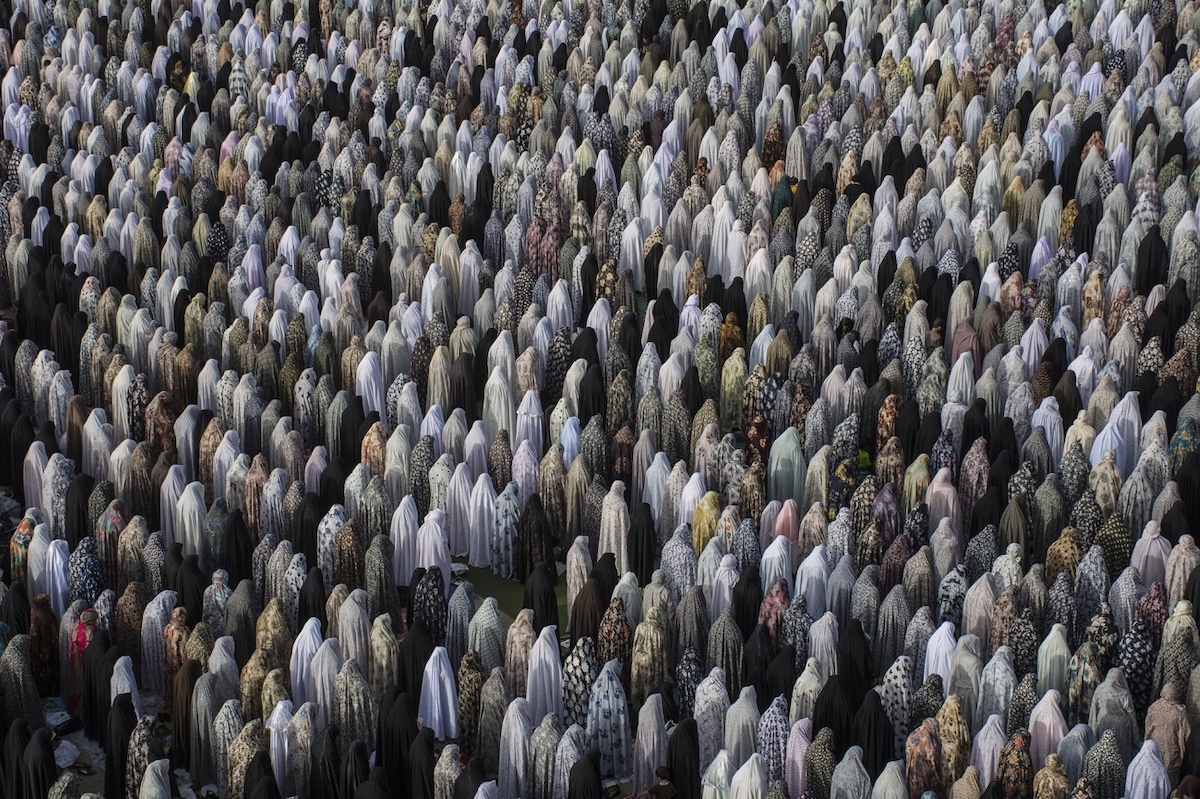 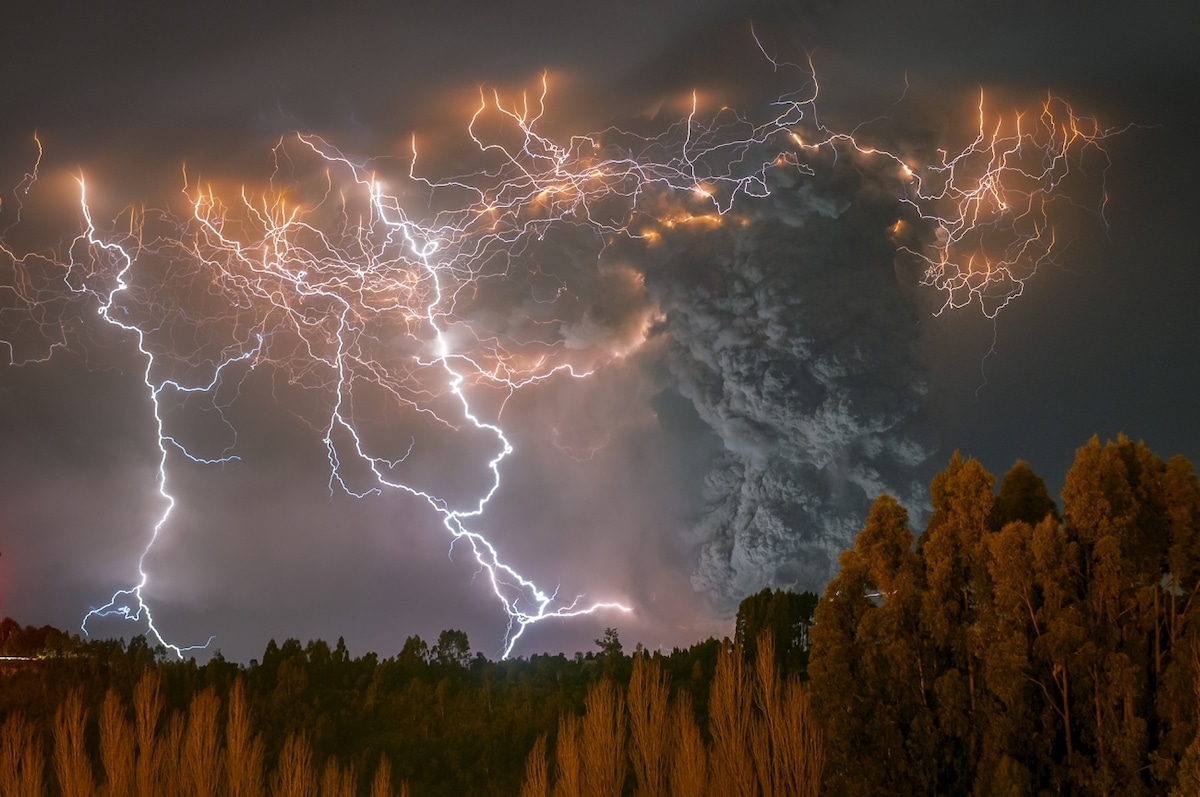 “El Cordón Caulle II” by Francisco Negroni. Second Place, The Beauty of Nature.
“In 2011, I witnessed an incredible dirty storm that occurred during the furious eruption of the Cordon Caulle located in the region of the Rivers in Chile. It was a storm that scared thousands of people who lived in areas near the volcano. Hundreds of people were evacuated and the ash burial erupted many kilometers of forests and fields.” 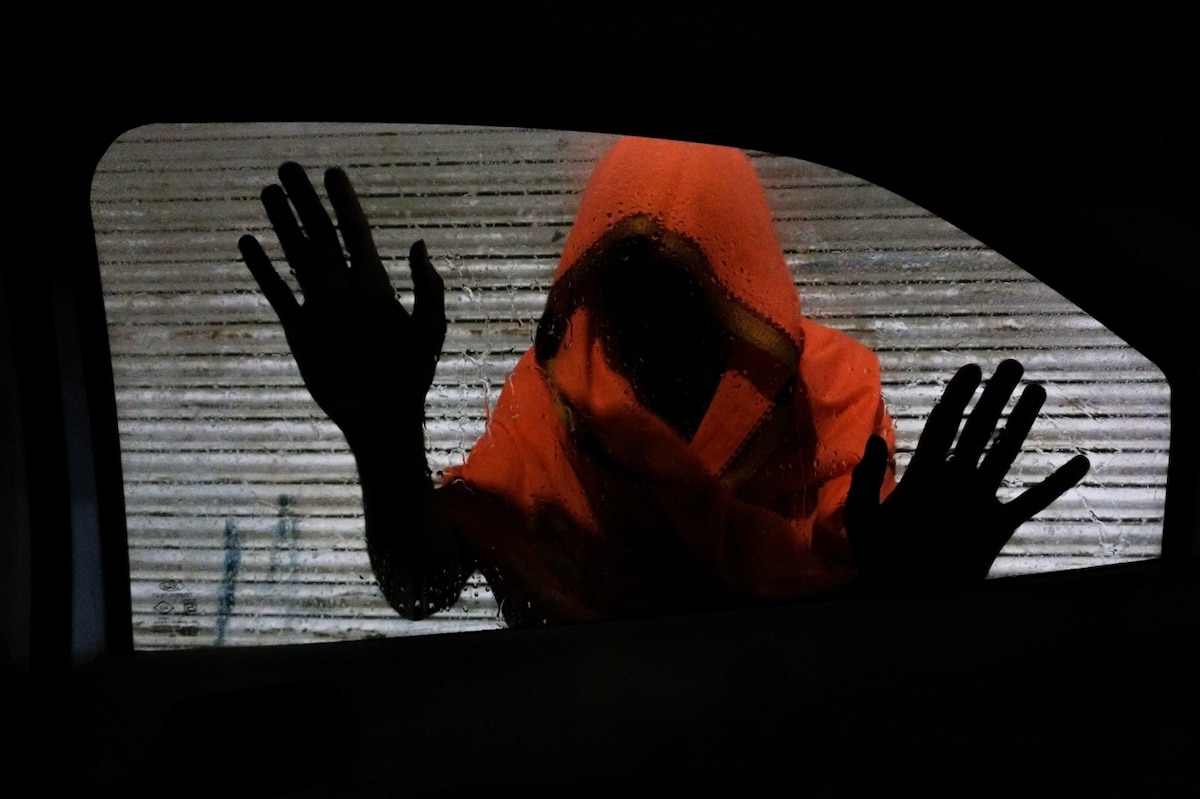 “God on earth” by Shridarshan Shukla. Second Place, Under 20.
“This makes me remember about the god on earth that is ‘Mother”. This lady just kept her hand on the windowpane and it seemed like she called me ‘Beta’ that means ‘Son’. She was looking for her children in each and every vehicle. Her face was not visible and yet her love for each and every son over the road was the same as the love and affection of a mother who doesn’t have a face. She was asking for ‘Bhiksha’ of love and affection from the people.” 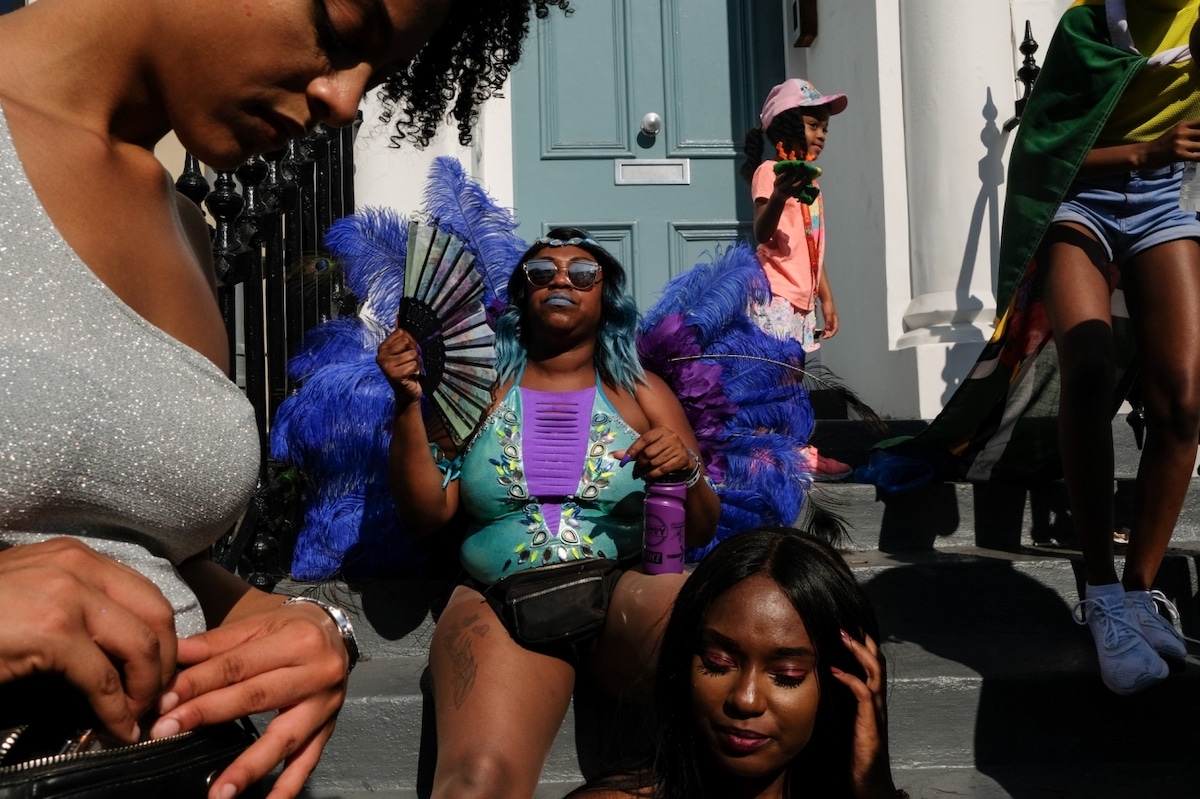 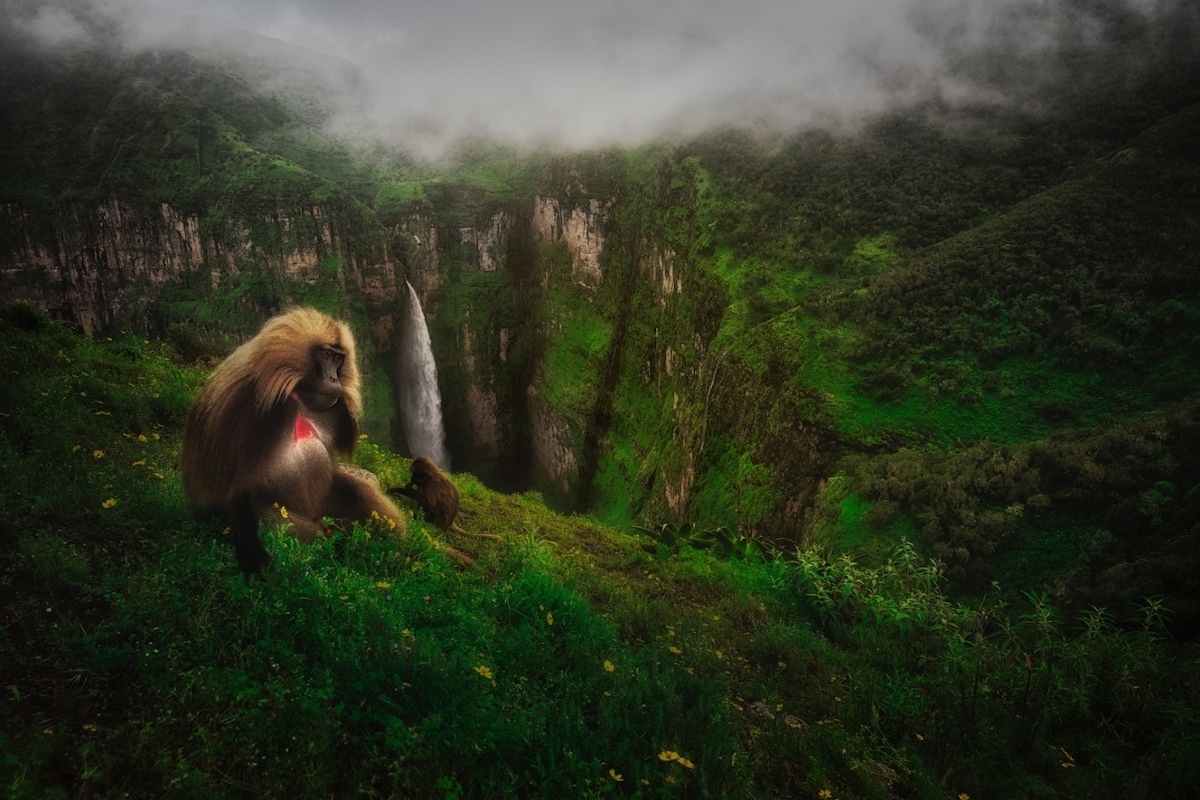 “Utopia” by Riccardo Marchegiani. First Place, Under 20.
“I called the photo Utopia, because nowadays, in our anthropomorphized world, it’s almost impossible to see a scenario like that, an unspoiled nature in a perfect wilderness state, like it has been frozen forever in time.”

Spectacular Winners of the 2020 Astronomy Photographer of the Year Contest

Marvel at Mervyn Peake’s art from childhood to Gormenghast – News