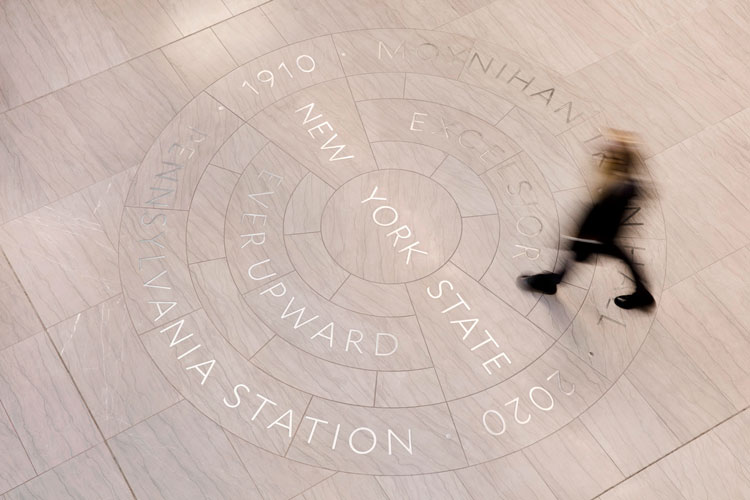 The project has been called New York’s “most ambitious transportation and infrastructure upgrade in decades” and involves the extension of the city’s Penn Station.

Penn is one of the city’s busiest stations, servicing some 600,000 travellers every day (pre-pandemic). Located near a host of tourist attractions, it also provides links to other major US cities like Boston and Philadelphia. The works increase the station’s capacity by 50 per cent.

Watson & Co was approached for the branding project in 2019, according to studio founder William Richmond-Watson. The brief, he says, was to reimagine the civic space as one that “plays host to both the people of New York City and all its world visitors”.

The new Moynihan Train Hall is housed within the 100-year-old Farley Post Office building, which sits across the street from Penn Station.

Richmond-Watson says the team applied a “hyper-contextual” approach to the branding of the station, which considered the “rich history of the building, project and city”.

“The vast space of the renewed Farley Post Office building is a stark juxtaposition to its neighbouring train hall that we all know too well,” he says. “We wanted to make a brand that would let the voice, personality, and grandiosity of the train hall shine through without distraction.”

A “timeless” tribute to the project’s supporter

At the core of the identity project are two brand marks: the “eagle” and a monogram.

The abstract eagle mark acts as the primary band mark and can be found across exterior signage and interior gate markers. It was in part inspired by the “meeting points and connection of people around the station”, and also serves as a nod to the USPS logo and the legacy of the building as a former post office.

“It also pays homage to the eagle sculpture removed from the original Penn Station,” Richmond-Watson adds.

Meanwhile the monogram is a “timeless” tribute to the late Senator Moynihan, for whom the new train hall is named, for his “enduring vision for the project”, Richmond-Watson says. It can be found carved into the stone pillars in the great hall area of the station.

“Speaking to the city with self-awareness, honesty, humour and wit”

The rest of the identity is built from a dark blue and white colour palette and a tone of voice that is intended to feel like “a New Yorker speaking to the city with self-awareness, honesty, humour and wit”.

A number of “hidden gems” have also been included. One such feature is an inlaid postal-inspired seal at the bottom of the hall’s grand staircase; another is a custom typographic treatment from type designer Tobias Frere-Jones, which is etched into the foundation of the building and adorns the front of the station in bronze letters.

“A love letter to New York”

Rather than view the project exclusively as a civic infrastructure challenge, Watson & Co used its previous experience in hospitality and placemaking to tackle the project.

As the studio explains, the overarching brand concept was “a love letter to New York”. The copy, found both onsite and online, aims to reflect this.

“For such a monumental civic institution, it was imperative that we thoughtfully consider the context of the space and the legacy of the building,” says Richmond-Watson.

“Every piece of the brand has a streamlined elegance that captures the calming atmosphere of the building and its rich history while elevating it to be modern and timeless.”