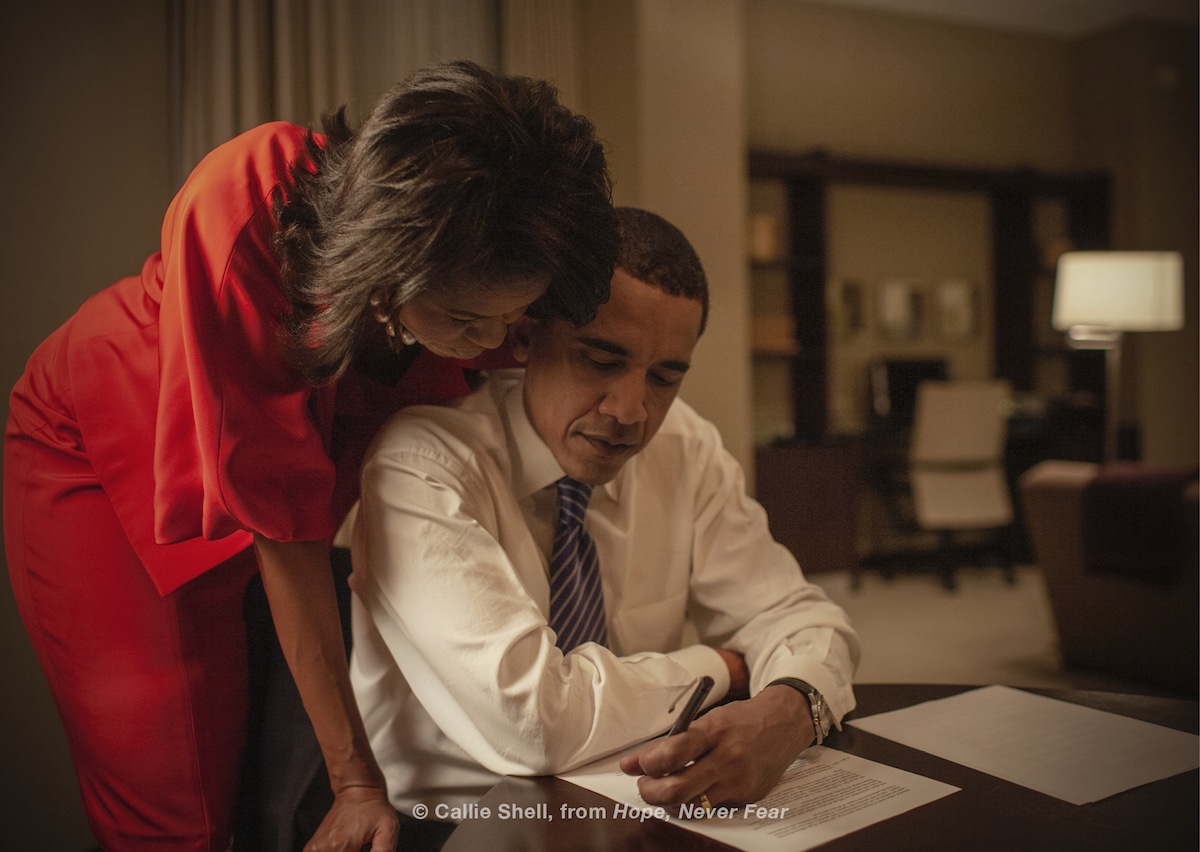 Photographer Callie Shell knows politics. Not only did she spend eight years as the official photographer of Al Gore while he served as Vice President, but she also followed John Kerry during his 2004 presidential campaign on assignment for TIME. It was during that time that she met Barack Obama, when he was still a Senator from Illinois who was several years from embarking on his rise to the White House. It was an encounter that would change both parties forever.

That fortuitous first encounter gave way to a relationship between the Obamas and Shell that has continued to today. Shell’s unprecedented access to the private and public life of the family allowed her to capture how they balanced family, friends, and politics. With her new book, Hope, Never Fear, Shell is releasing an incredible body of work that tracks their historic road to the Presidency, while at the same time giving an intimate look at the Obama family dynamics.

From Barack Obama’s early days on the campaign trail to his groundbreaking victory in the 2008 presidential campaign to his time as the forty-fourth President of the United States, Shell was there to capture it all. At the same time, she was able to document the incredible relationship between all members of the Obama family. We see Michelle Obama and their children as they fully support Barack’s dreams, while also maintaining their own sense of normalcy. Living in a time when politics has clearly divided the nation, Hope, Never Fear is a reminder of a different time filled with the promise of change.

We had a chance to chat with Shell about her incredible work with the Obamas and how their relationship unfolded. Read on for My Modern Met’s exclusive interview. 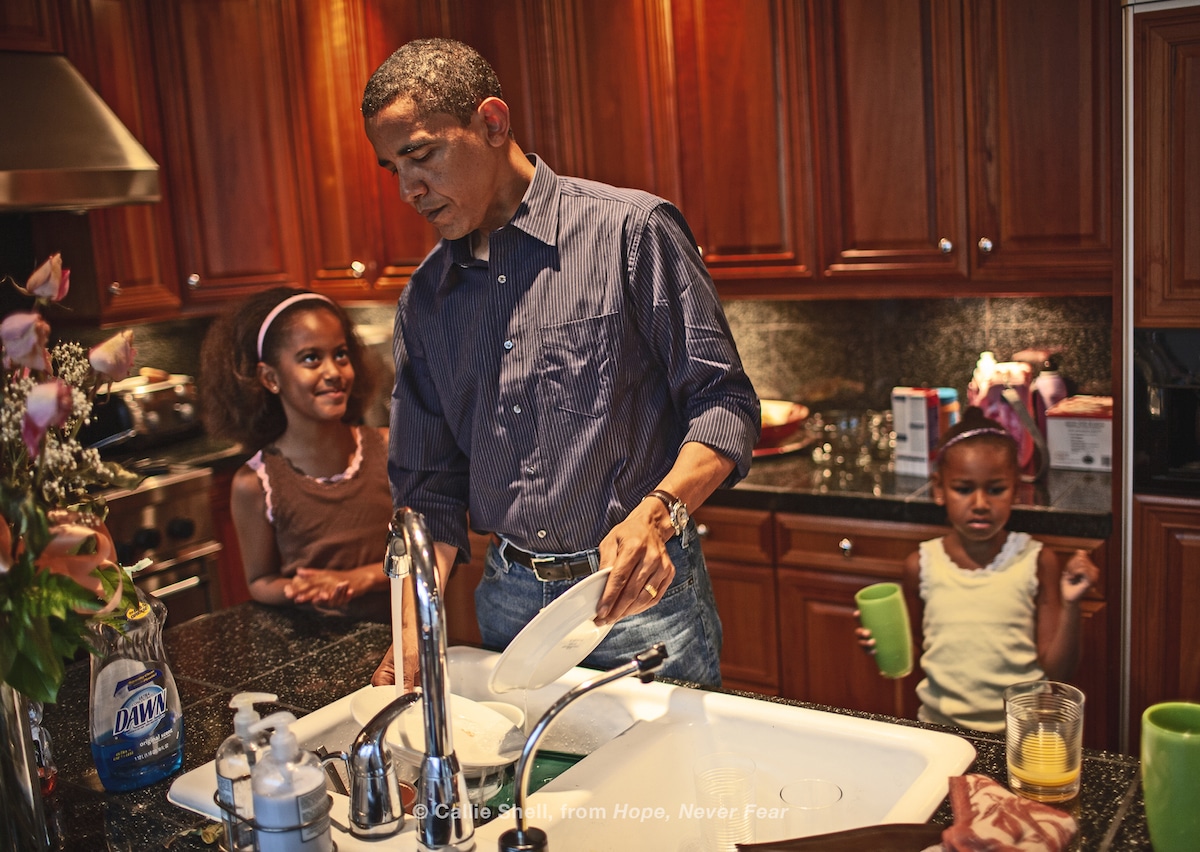 Hyde Park, Chicago, IL, October 2, 2006
Obama and the girls get breakfast and wash the dishes. This morning he took the girls to school and Michelle Obama went to work. (Photo: © Callie Shell, from ‘Hope, Never Fear by Callie Shell’)

What do you remember most about your first encounter with the Obamas?

I first met Barack Obama in 2004, when I was covering John Kerry’s presidential run. I had been standing in a long back hall of a Union Workers Building. I was waiting for Kerry to finish some press interviews. I saw this man slowly progressing down the hall, stopping to talk to the janitor, a few union workers, the Kerry staff, and anyone else along the hall. He stopped to talk to me. We ended up chatting for a bit about our kids and our spouses—our families. He was very funny.

So the first take away from our encounter was that he was a family man, obsessed with his kids and family like me. However, the other impression was that he talked to everyone he came across and was sincerely interested in what they had to say. There was no one around watching him—well me, but he did not know who I was yet—thus there was no one to be on for. It is true that I told my husband on the phone that night that if we lived in the same town, I knew we would all be friends and that he would love this guy.

I met Michelle Obama in 2006 at her home in Chicago. She invited me into her home and proceeded to balance her checkbook, respond to her Blackberry, and talk at the same time to both of her young daughters. Like Barack, she was witty, kind, smart, and very attached to her daughters and husband. I also noticed that she did some gentle ribbing to make him laugh and not take things too serious. 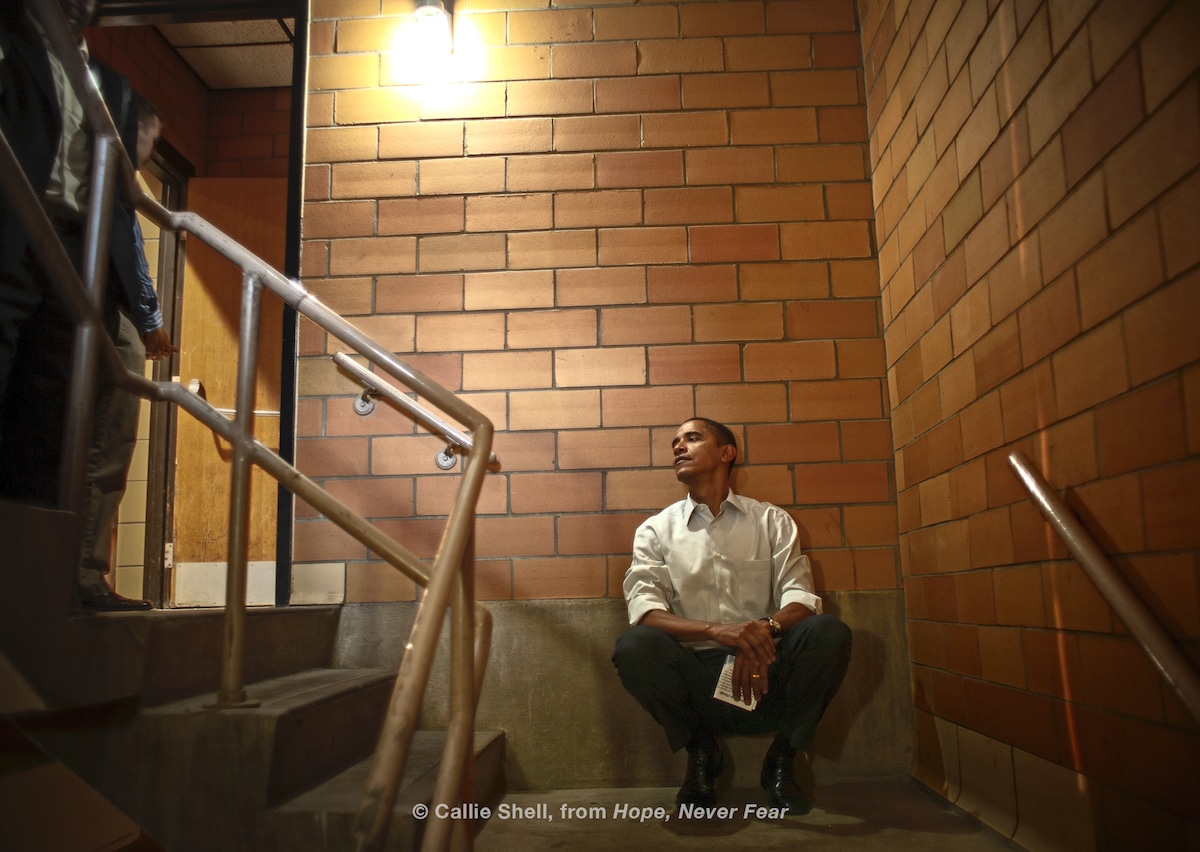 Muscatine, IA, November 7, 2007
Obama listens from a back stairwell as he is introduced. It was his second or third speech of the day. (Photo: © Callie Shell, from ‘Hope,
Never Fear by Callie Shell’)

What made you so sure that Mr. Obama was one to watch when you first met him?

Two things. The first was the way he talked to everyone that day in the hallway. Second was the enthusiastic cheers he received when he walked out for the rally to introduce then-Senator John Kerry and the thunderous applause he received after his remarks. It was obvious that many people were there to hear what he had to say and that they were big fans. 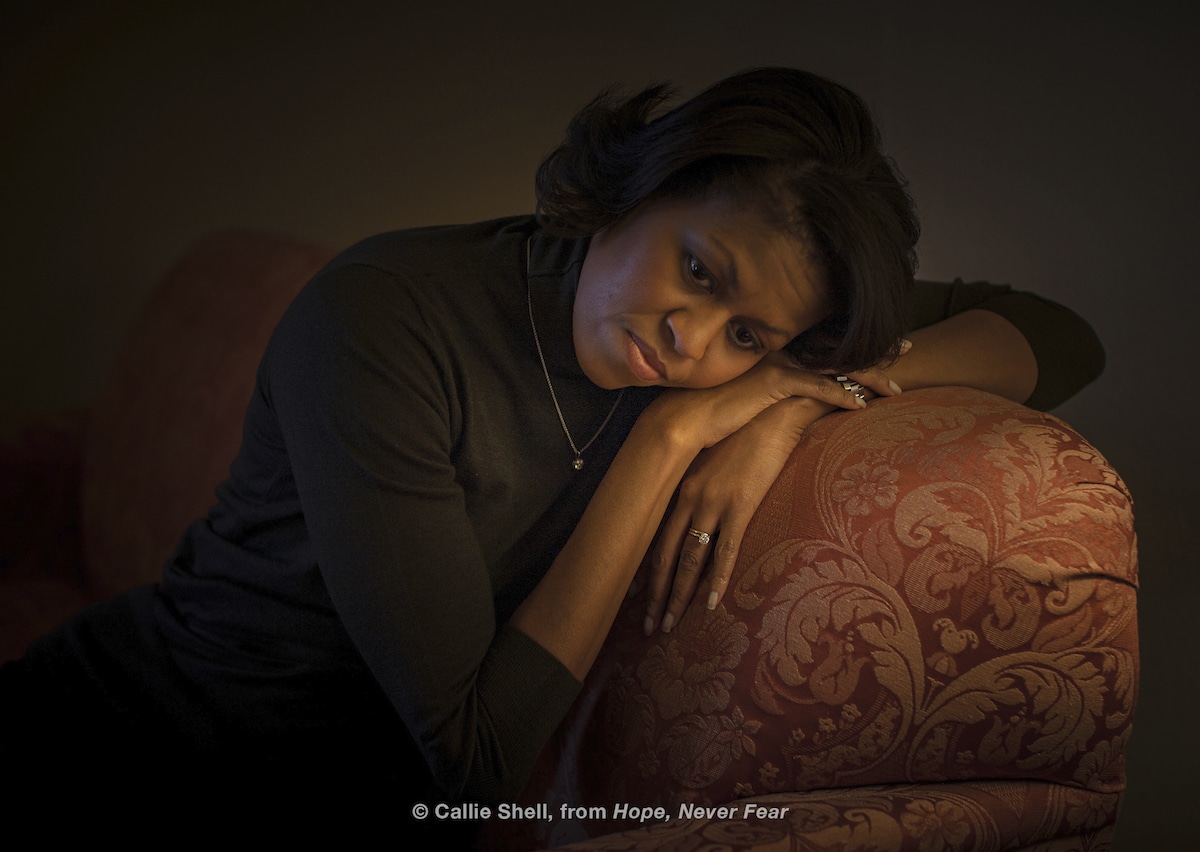 Columbia, SC, January 26, 2008
In a hotel room the morning of the South Carolina primary, which they won later. (Photo: © Callie Shell, from ‘Hope, Never Fear by Callie Shell’)

How was covering the Obama campaign different than other presidential campaigns you’d covered?

The energy level and crowds that came out to hear Barack Obama in the early stages of the campaign were higher and larger than any I had seen in my previous four campaigns. People were also much more emotional and, I know it sounds corny, but hopeful. 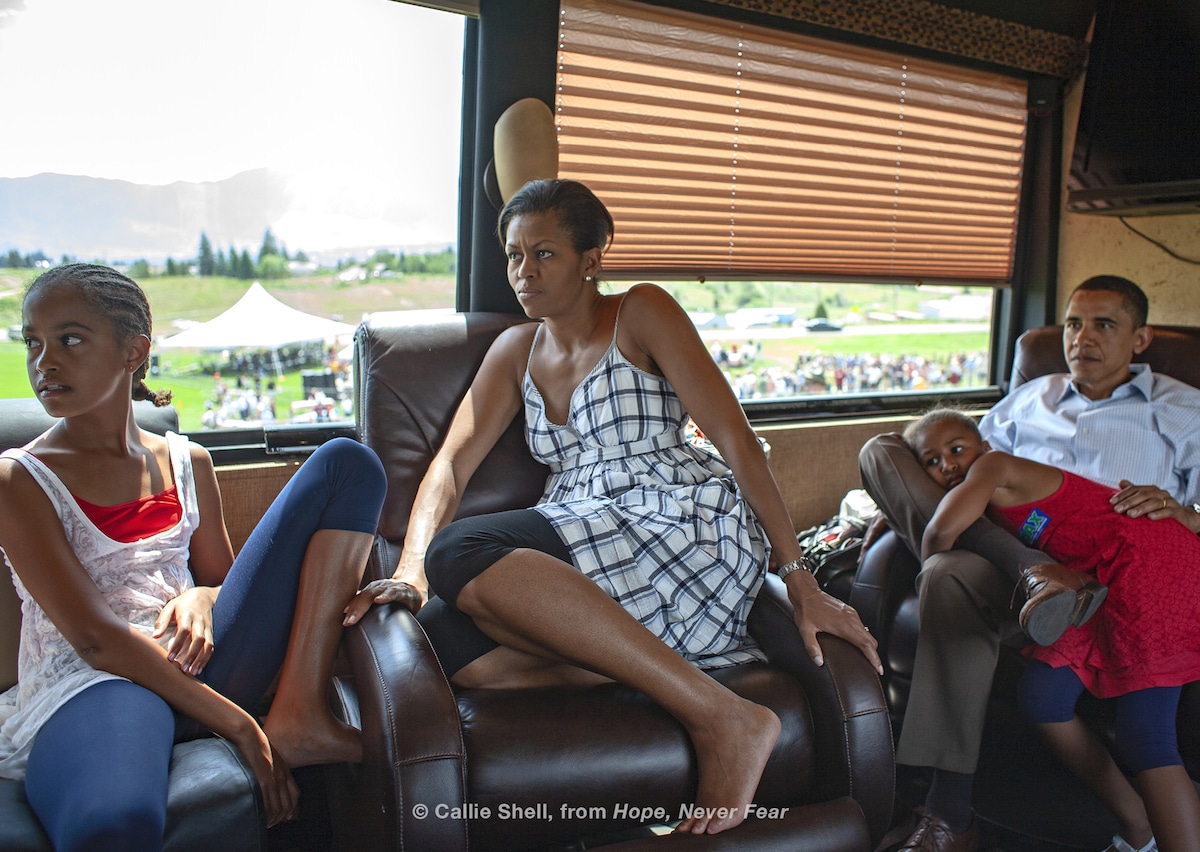 How did your work with the Obamas evolve into something more long term?

I felt like it was a story I should see through until the end. When they asked me to be their photographer in the White House and I turned down the offer, I asked if I could continue to document their journey until the end of their life in the White House. They agreed to let me. I also thought it was important to have one piece from one person of the entire journey from their home in Chicago, Illinois to their eight years in the White House. It is the journey that helps you understand the final destination—to understand who someone is you have to see how they got to where they are. 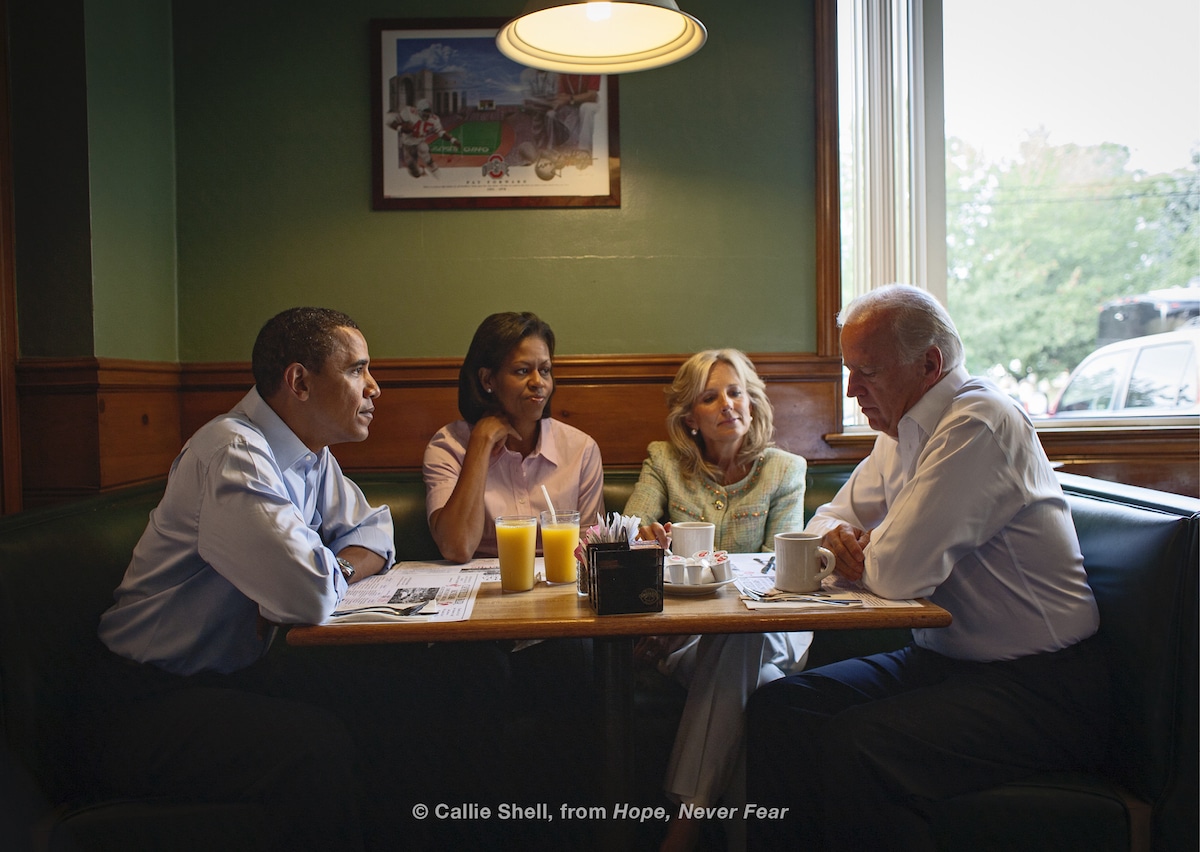 What was the most surprising evolution you saw with the family?

I feel the office of the President does not change you. It just reveals who you are. Thus, I feel Michelle and Barack did not change, we just saw who they were.

How did you go about cultivating trust while still retaining your impartiality as a photographer?

I am rarely impartial about the people I photograph that long. It is part of maintaining their trust. 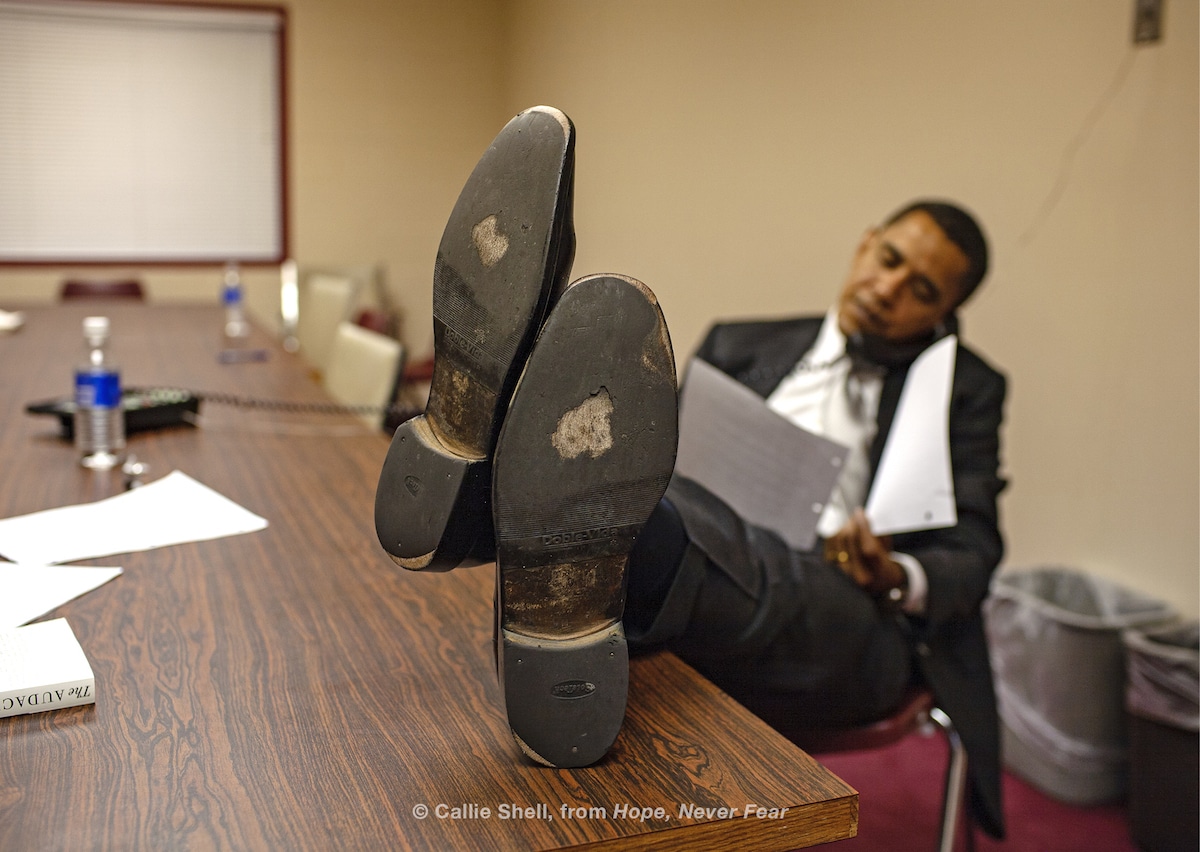 Providence, RI, March 1, 2008
Obama doing press interviews by phone between events. When he saw me photographing his shoes, he said he had already had them resoled once since he entered the race. They were his lucky shoes. (Photo: © Callie Shell, from ‘Hope, Never Fear by Callie Shell’)

Is there a particular moment or image that stands out as meaningful to you?

I would say my book. It is the entire body of work because it reflects who they are and their journey to and in the White House.

What do you think the legacy of the Obamas will be?

Only history will tell. Besides being the first black president and the first black family in the White House, I think it will go down that they were good for our country. They brought about a period of acceptance and the belief that anyone can create their own journey and reach their destination. 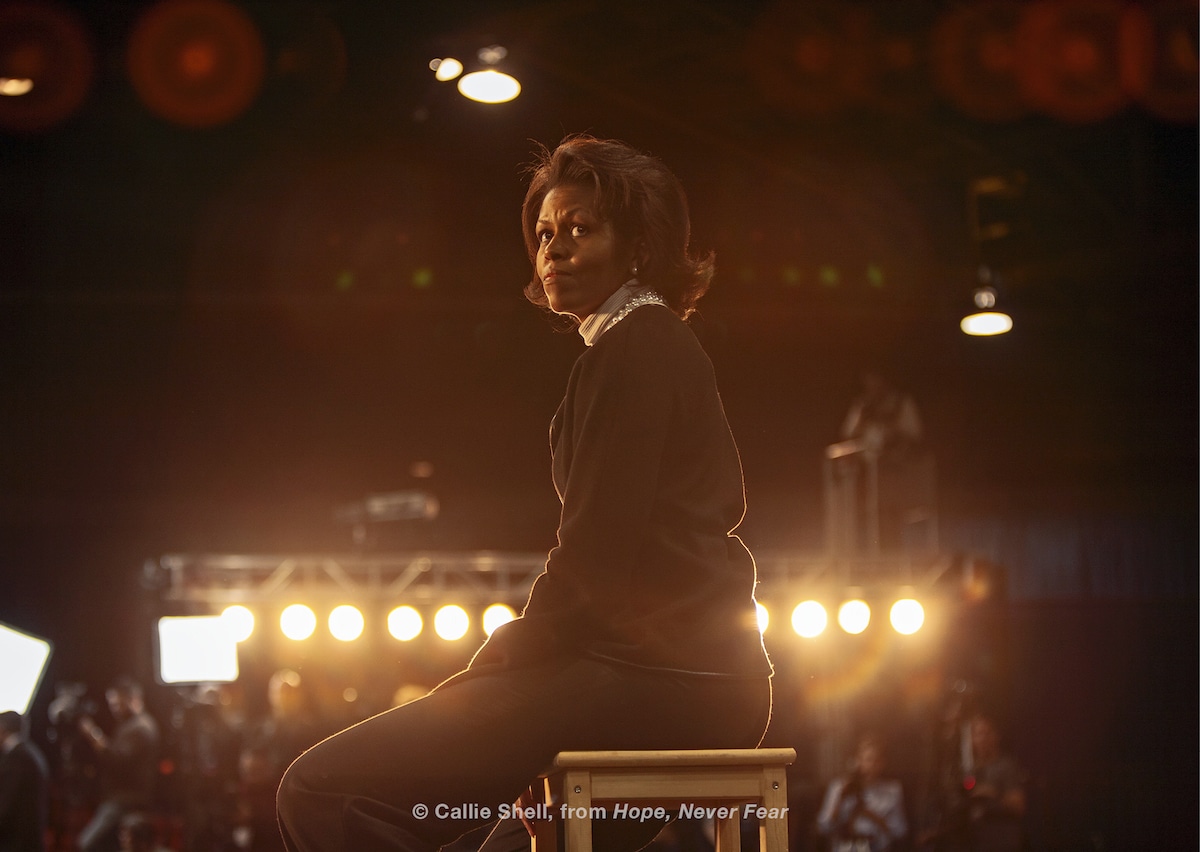 University of Illinois, Chicago, IL, February 11, 2007
That morning Obama announced he was running for the 2008 presidency. (Photo: © Callie Shell, from ‘Hope, Never Fear by Callie Shell’)

What do you hope that people take away from the book?

Acceptance and family are most important in life. As I wrote in my introduction in the book, “Hope is what sustains us in difficult times. It is what brings us out of despair, and what helps us defeat seemingly insurmountable obstacles. It is what motivates us to strive for our goals, whatever they may be. And it matters now, more than ever. So to every child, young person, and adult who worries they are different, or doubts their worth, I hope the images and words in this book show that anything is possible.

We are all born equal, with a heart, a brain, and a soul. If you push for what is right, and good, you can overcome any adversity. I hope sharing the Obamas’ journey empowers people of all ages, races, and genders to believe in themselves, and to use their voices to take control of their future.” 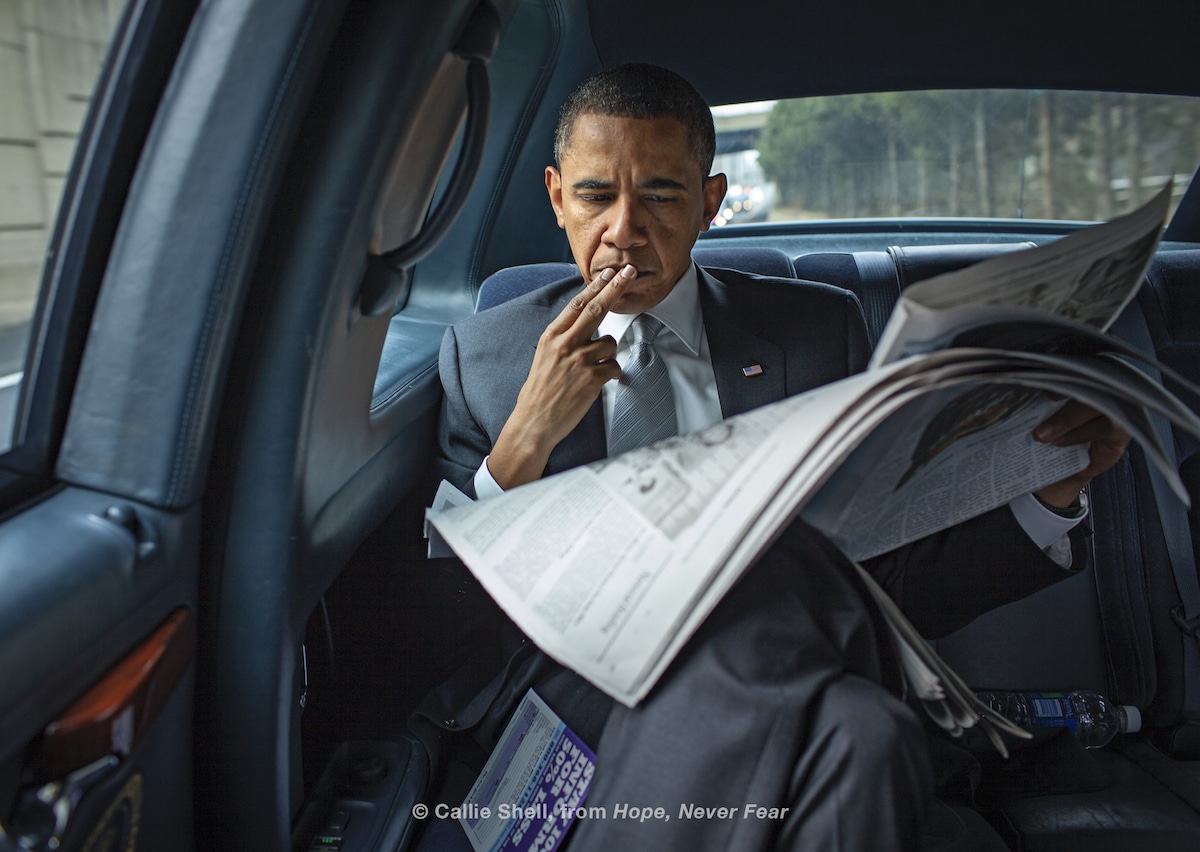 Limo en route to the White House, Washington, DC, January 19, 2010
One year into his presidency. Reading over the morning papers after an education event in Fairfax, Virginia. (Photo: © Callie Shell, from ‘Hope,
Never Fear by Callie Shell’)

Hope, Never Fear: A Personal Portrait of the Obamas is now available online and in bookstores. 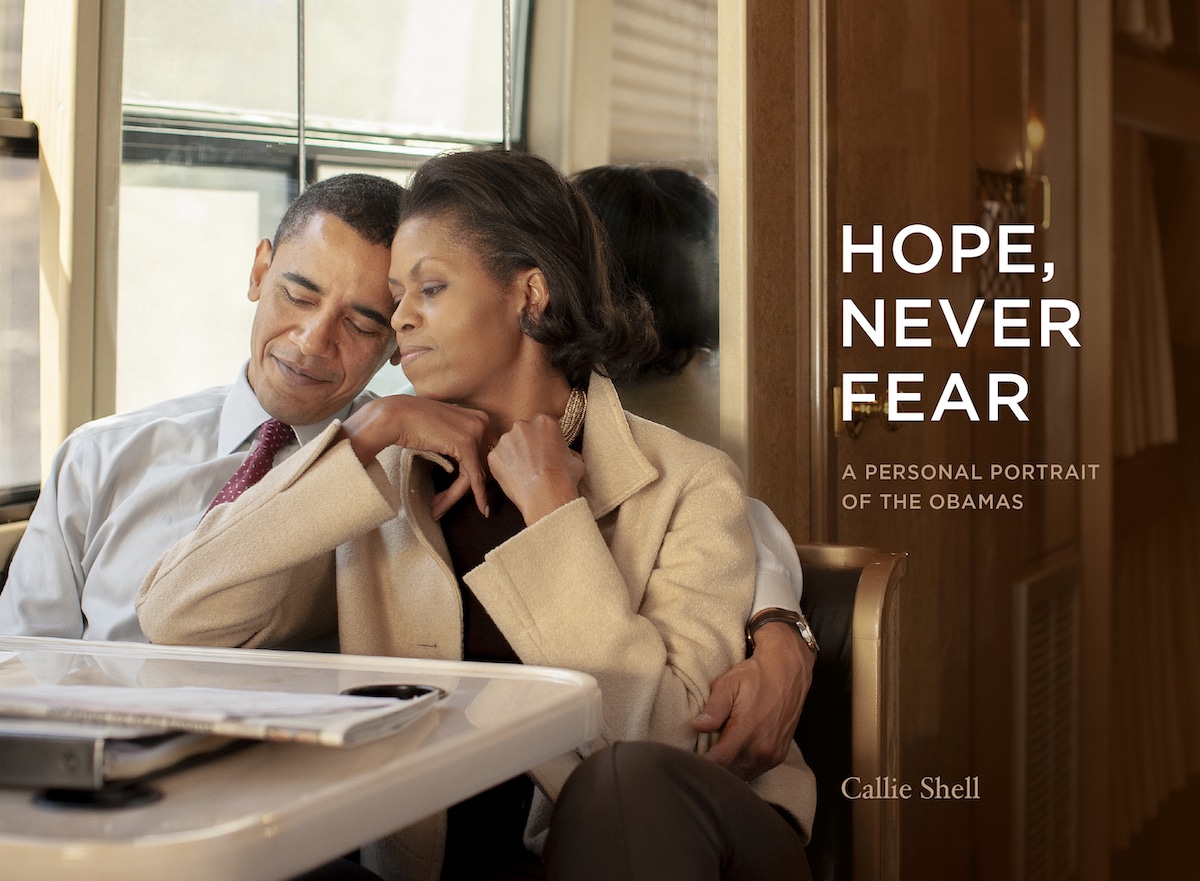