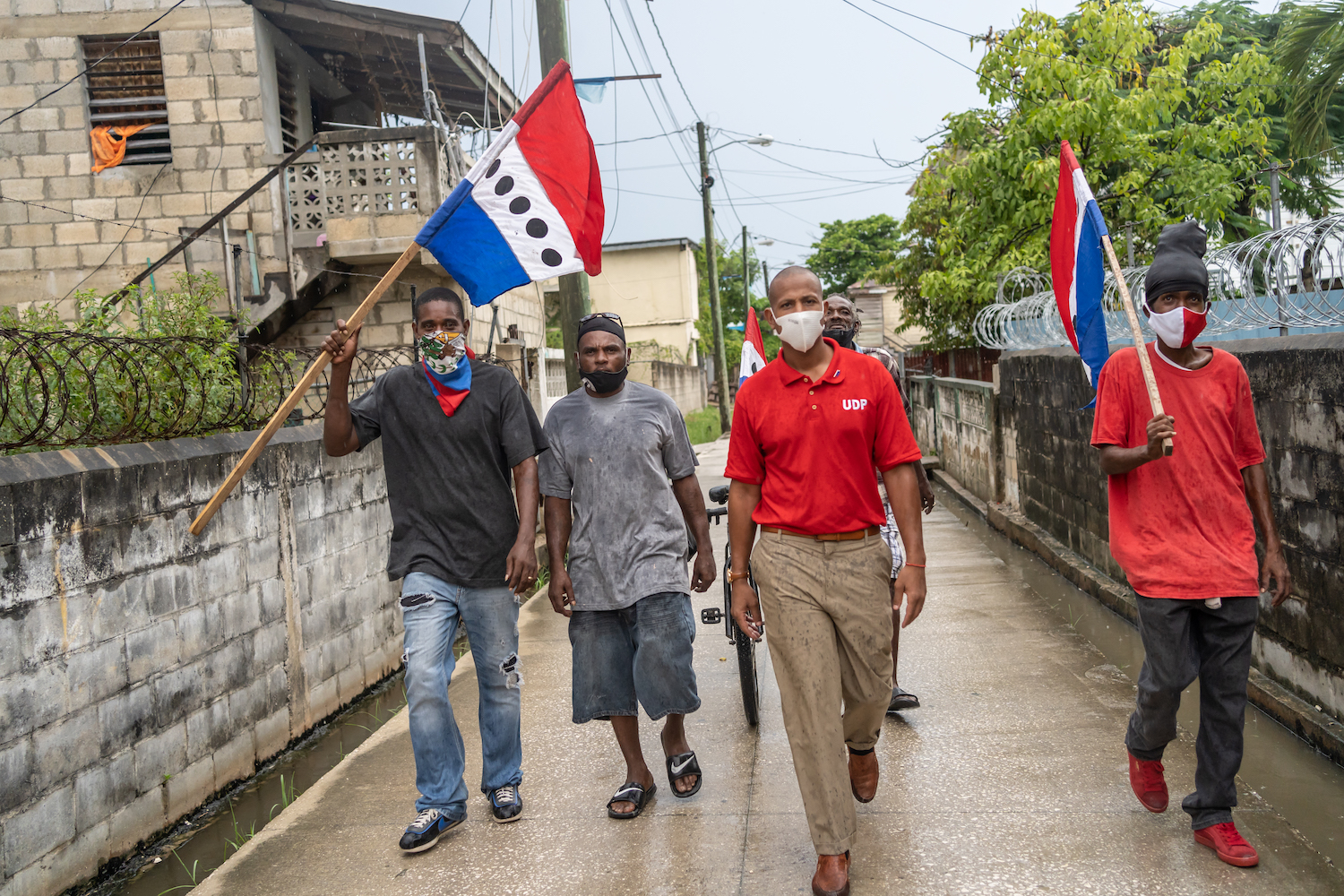 Sean “Diddy” Combs, previously known as Puff Daddy, was partying it up at a New York nightclub in December 1999 when a shady figure from the criminal underworld threw a wad of cash in his face. What happened next would be disputed, but shots rang out in the club around Combs, his then-girlfriend, Jennifer Lopez, and an up-and-coming rapper named Shyne.

After the incident, Shyne did nearly nine years in prison for attempted murder, assault, and reckless endangerment. Combs went on to become one of the richest artists and producers in music history.

Moses Barrow, now 41 and still mostly known by his pseudonym Shyne, didn’t want to rehash the past but told VICE News that the nightclub incident that put him behind bars was “self-defense” and that “I was just protecting my friends.”

Shyne had his fame cut short, but now he’s looking for popularity of a different kind: political office in his home country of Belize, in Central America.

Before his conviction, no one who hadn’t released an album generated more hype on the hip-hop scene than Shyne. The then 20-year-old phenomenon was discovered freestyling in a New York barbershop. The music world was still reeling from the unsolved 1996 and 1997 murders of Tupac Shakur and Christopher “Notorious B.I.G” Wallace, when Combs introduced Shyne as his latest protegé. After he first appeared on a remix for a track from the R&B group Total, the eery similarities between his baritone voice and silky flow as that of Combs’ previous star disciple, the deceased Biggie Smalls, had hip-hop heads buzzing.

Then it all went wrong, and the nightclub incident landed Shyne in prison.

His second album, partially recorded over the phone while incarcerated, also tracked high on the Billboard charts. But after being released, the rap star who never became a U.S. citizen was deported to his native Belize, where he had immigrated from as a child.

On November 11, Shyne is running for election to represent one of the most downtrodden and dangerous constituencies in the small Central American nation of Belize. And he believes that his life experiences make him “tailor-made” for the complexities of the rough-and-tumble Southside neighborhood of Belize City.

But Shyne’s rollercoaster life and career, from immigrant to rap star to prisoner to politician, remains as filled with highs and lows as always.

Days after being interviewed by VICE News, scandal rocked his campaign when a police report leaked of an alleged domestic violence incident reported by Shyne’s wife, Catherine Barrow. She would release a short, signed statement the following day, withdrawing the accusation and saying that it was “exaggerated,” which Shyne posted on social media along with his own statement. He claimed it was only a “verbal dispute” and stated that “I unequivocally condemn domestic violence or any violence against women.” Shyne refused to comment on this allegation and instead referred VICE News to his statement, and provided an additional open letter endorsement from his wife, who would also appear in video ads promoting her husband’s campaign in the weeks following.

All quotes attributed to Shyne are from the previous interview.

But even prior to the latest allegation, Shyne’s arrival on Belize’s political landscape has been controversial. Before his mother immigrated to New York in the mid-80s, she’d been involved with a young, up-and-coming Belizean politician named Dean Barrow who would go on to become the country’s first Afro-Caribbean prime minister in 2008. Although the elder Barrow didn’t play much of a role in Shyne’s childhood, after Shyne’s success, downfall, and deportation to Belize, the relationship between father and son healed and contributed to his resurgence as Belize’s unpaid music ambassador.

“My opponents have this narrative that I’m just a beneficiary of my father, but it’s baloney,” said Shyne. “Because everything that I accomplished had nothing to do with any political party, it was all accomplished in the U.S. And it doesn’t matter who your father is (in Belize) in the United States.”

Critics, on the other hand, are worried.

Audrey Matura, a prominent Belizean lawyer and activist, said that her biggest concern about Belizean politics is “nepotism, because I see a political dynasty being created by the Dean Barrow faction of the party.”

Before Shyne joined his mother permanently in New York at the age of nine, much of the younger Barrow’s early life was spent bouncing between the Belize City homes of his aunt on his father’s side and uncle on his mother’s side. His aunt, Denise Barrow, and uncle, Michael Finnegan, are now both prominent politicians in Dean Barrow’s United Democratic Party (UDP) in which Shyne is also representing.

In November, Dean Barrow will step down from politics after three successive terms as prime minister, as well as his area seat representing the Southside constituency of Queen Square which he’s held since 1984. As will Shyne’s uncle, Michael Finnegan, who long served as the minister of housing and urban development and represented the Mesopotamia constituency since 1993.

The UDP candidates in the November election for Queen’s Square and Mesopotamia are Denise Barrow, more commonly known in Belize as Sista B, and Moses “Shyne” Barrow respectively, while the new candidate for prime minister is a close associate of the Barrow family and lifelong UDP member, Patrick Faber.

Matura criticized the campaigns of both Sista B and Shyne because the out-going prime minister and Finnegan “handed (the constituencies) on a platter” without having the experience typical of a politician. She particularly scoffed at Shyne’s record as a musician being politically relevant.

“Rap music is often very vulgar and degrading to women and does not add anything to his credence over here,” said Matura. “But what I expect in a candidate may not be what the younger generations expect or want. So maybe he would be attractive as a candidate to them, but to me, it’s not attractive, I’m not impressed one bit.”

While much of the Southside has long been a UDP stronghold, it’s expected to be hotly contested in the upcoming elections because of the ongoing insecurity in the region. In July, Belizean authorities declared a State of Emergency in the Southside that would be extended into October and see an increased police presence because of a drastic spike in mostly gang-related violent crime.

Candice Pitts, the Mesopotamia opposition candidate for the People’s United Party (PUP), firmly placed the blame on UDP leadership, saying the party’s legacy in the area is “the social decay, the rise in crime, the rise in unemployment, the rise in poverty.”

Pitts grew up in a single-parent home on the Southside, and after excelling at school and sports, received a basketball scholarship in the United States, and would go on to complete her Ph.D. from Howard University. After moving back to Belize in 2016, she realized that not much had changed and decided to get into politics.

Pitts spoke about various initiatives she’s done in the region like opening a sewing center that provides disadvantaged women with an employable skill, as well as a focus on single mothers and teaching them how to find ways to give both themselves and their children opportunities.

The young politician declined to comment on the recent allegations against Shyne, but did say that she believes “every day he reveals himself to the people and the people can see who he is, and what he represents.”

How locals choose to view Shyne will likely determine the election.

On a rainy Friday afternoon in October, Shyne walked the Southside campaigning to be the Mesopotamia representative, followed by supporters waving UDP flags.

Andy Alford, a 19-year-old first-time voter said Shyne would have his vote because “he shows the people a lot of love and I think he will make a change.”

Alford specifically commented on Shyne providing “entertainment” for young people, like building a basketball court in the area. Since 2014, Shyne has maintained an active presence in the Mesopotamia community. He created a research center that allows neighborhood kids access to computers and resources, has set up parenting workshops to teach young families how to stay together and excel, and worked on job training initiatives that he claims will help people become self-sufficient.

“My story is an example of what these young men and women can accomplish if they set their minds to it,” said Shyne. “They don’t have to buy into the gang lifestyle, they don’t have to buy into the fact that they’re from the Southside of Belize City, they’re from Mesopotamia, so they are condemned to be criminals. No, I debunked that myth by living the life that I’ve lived over the last decade and change.”

Shyne called himself a “role model”, but in the weeks following the domestic violence allegation his character remains a constant talking point, both on the streets and in the local media.

Still, Glenn Tillett, a Belizean political analyst, thought the Mesopotamia election could go either way because of the Barrow family’s longstanding ties to the region. However, Tillett said the Southside is an area with a lot of “crime and grime” and remained pessimistic about either candidate making a real change.

“I don’t know if any one person can do anything to markedly improve the prospects and opportunities of the people who live there,” said Tillett. “(Politicians) make as many promises as possible. Because that’s what happens in Belize, people make a million and one promises, and then they seem to forget about them the minute the election is over.”