Resources magazine has been redesigned to make the environment “accessible” 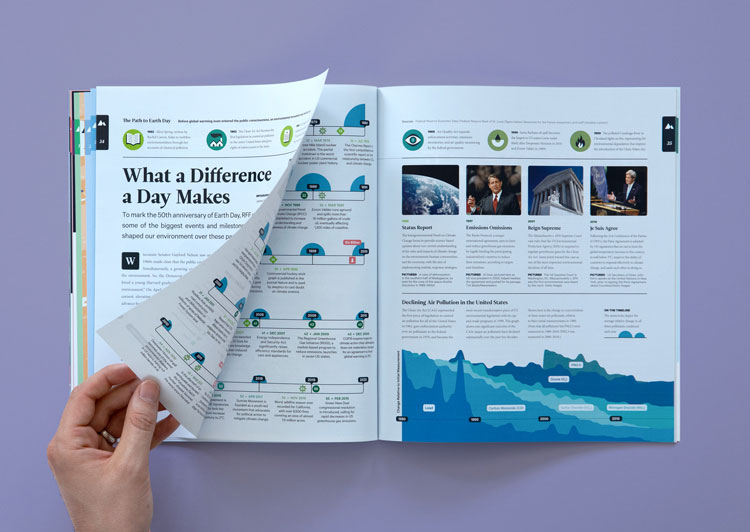 Environmental and energy research magazine Resources has been redesigned by London-based graphic designer James Round.

The magazine is produced by Resources for the Future, an independent non-profit research institution based in Washington, DC. Established in 1959, the magazine is published three times a year.

Each issue covers a broad range of environmental topics, and aims to offer insightful comment for the public as well as information for policymakers.

Round tells Design Week that he had been working with the “design-literate” editorial team, also based in Washington, on a series of infographics last year. Work on the visual update then started for this year’s issues, which were published in March and May. Round is currently working on the third issue.

With an audience of policymakers, the design also had to jump out. “It’s about making the issue stand out when it’s dropped on someone’s desk – be it a policymaker or their assistant.”

The most notable change on the front cover is the title, which is now displayed in an Acta typeface. The R’s glyph dips just below the title to “add a little bespoke touch”, Round says. This now works as a wordmark for the brand’s wider identity, as seen on the website. Inside, the existing fonts have been retained; Minion Pro for body copy, Leitura for serif and Calibre for the sans serif.

The internal redesign has been driven by a “contemporary” mindset and layouts that give the data-heavy information more “room to breathe”, Round says. He was inspired by magazines such as Makeshift and The Outpost which use “little visual flourishes to create beautifully complex layouts”.

The designer was also influenced by how “slow news” magazine Delayed Gratification makes information “accessible and elegant” and the “bold” illustrated elements in Weapons of Reason (a title which Round has worked on before).

Making each issue stand out

A more “muted” colour palette has been adopted for the magazine, which complements the wider brand colours but aims for a more pleasurable reading experience. Colours have also been used as a visual cue on the contents page. Next to the titles is a coloured tag which matches with the illustrations at the top of the page.

Each article also has a prominent colour scheme so that it is clear when flicking through how the magazine is divided. “There’s a wonderful flash of colour as you go through,” Round says.

Illustration is a key part of the redesign, according to Round (who is an illustrator himself). Working with illustrators like Michael Driver and Yukai Du has always been a dream for Round, and Resources has presented plenty of opportunities to collaborate he says.

It is a “no-brainer” in bringing the serious issues to life, according to Round. Photography can be expensive and not always inspiring for the topics covered in Resources. During lockdown, when photoshoots have to be carried out under social distancing, illustration is also a useful workaround.

One aim for Round was to take the “very academic, content-heavy pieces” and give them “as much room to breathe” as possible, so that they are easily understood. In this way, the editorial design bridges the “gap between the scientists who are producing the work and the people who end up reading it”. On a spread entitled Lessons from the Clean Air Act, there are just two columns of copy while the remainder of the two pages are reserved for visuals.

At the top of each article is a bar that has the date, issue number and an out-of-context quotation taken from the article. Having a quotation that might not make complete sense before reading an article helps to entice readers into the piece, Round says.

The page number is placed towards the top of each side, in a lock-up with the brand’s logo. This kind of “page furniture” keeps readers engaged, Round says. “If you can add those small things that might delight people for a micro-second, that’s always good.”

Round also says that he is inspired by the time a reader might spend with a magazine. He asks,“What does a reader get out of a magazine from twenty seconds with a title, or twenty minutes or two hours?” These smaller — sometimes unnoticeable elements — encourage closer and multiple readings but also provide enough information on the first go.

Round has also worked on a gatefold for the summer issue of the magazine, which marks the 50th anniversary of Earth Day with a pull-out timeline (pictured below) showing milestones that have affected the environment. This is a collaborative process with the magazine, as the editorial team sent him the data for the lay-out.

For this issue, Round also created a deck of playing cards, using the insights from the gatefold. These were then sent out as a gift to the readers of the magazine. Featuring a four-way colour scheme which align to the four suits, each card has a statistic or milestone event relating to Earth Day.

Of the redesign, Resources managing editor Elizabeth Wason says: “Our aim was to level up with new issues of the magazine — and the new bold, confident style gets us further toward our goal of making Resources a flagship publication for our organization.”

DIY Cross Stitching with a Pattern