Select your Top Menu from wp menus
Art And Craft
2020-03-08
Miif Plus
Home
Art
Shelter from the Storm: the Aftermath of Hurricane Maria

The Smithsonian American Art Museum’s Chief of Conservation Amber Kerr and Paintings Conservator Gwen Manthey traveled to Puerto Rico for two weeks last summer as representatives of the Smithsonian to respond to the aftermath of Hurricane Maria. (Sadly, more recent earthquakes have struck the island, creating further damage.) Working with the Smithsonian Cultural Rescue Initiative (SCRI), Federal Emergency Management Agency (FEMA), and the Heritage Emergency National Task Force (HENTF), Amber and Gwen were sent to assess the damage of the collections at several cultural sites in Puerto Rico, creating examination reports that would then be used for funding and resources to treat the artworks. The three of us sat down together to talk about the experience.

What were your first impressions when you arrived?

Amber: On my first day I arrived at the FEMA command center to meet the personnel I would work with over the coming week. The command center was located in a former newspaper building, and I was awestruck by the number of dedicated people working in the area where the news reporters used to be. It was just like in a movie; a huge open room, with desk after desk of people all working in the same space, only these weren’t desks, they were collapsible tables with computers on them and people working side by side. This large room was like a beehive, full of energy and everyone working very hard.

How extensive was the damage you surveyed?

A: Even though it had been nearly two years since the hurricane, I was taken aback by the amount of damage still visible. As an example, there was a mural I examined in a library which had damage from the leaking roof. Funds allocated for fixing the roof had yet to be distributed, as priorities are first allocated to human life and rescue; then to reestablishing infrastructure, such as safe water, electricity, housing, and roads; and then, finally to issues, including building structures and cultural heritage damage. By now, the high humidity caused mold and further damage, and we cannot address the damages to the mural until the damage to the roof is fixed.

Gwen: While central San Juan has generally recovered, it was when I was on site visits outside of the downtown area where the effects of Maria could be seen. In Arecibo, buildings adjacent to the town square sit with caved-in roofs, missing doors and windows, and crumbling walls. From what I understand, one of the cultural institutions that sent work to Arecibo for safeguarding had been almost completely destroyed; returning the artworks to the institution would strain their resources even further.

What is the process for assessing artworks for damage?

A: For each location that I visited there were artworks the site had already been identified as needing evaluation, and so we arrived with a list of artworks to work from or we were provided a list when we arrived on the site. My responsibility was to examine each artwork, take notes on its condition, document its condition issues with a digital camera, and then write a brief assessment and treatment recommendation for each artwork, with an estimated value for treatment.

G: It was also critical to hear from staff about what preparations were made to safeguard their collections, if there was damage or water in the spaces where the collections were housed, and how long was it until triage and collections recovery could take place. That narrative helped determine what conditions artworks were exposed to, and if it correlated to what I was seeing on the artwork itself. Mold, tears in canvas, and mud on the surface are obvious at first sight, but other effects might manifest slowly, and not be readily apparent. 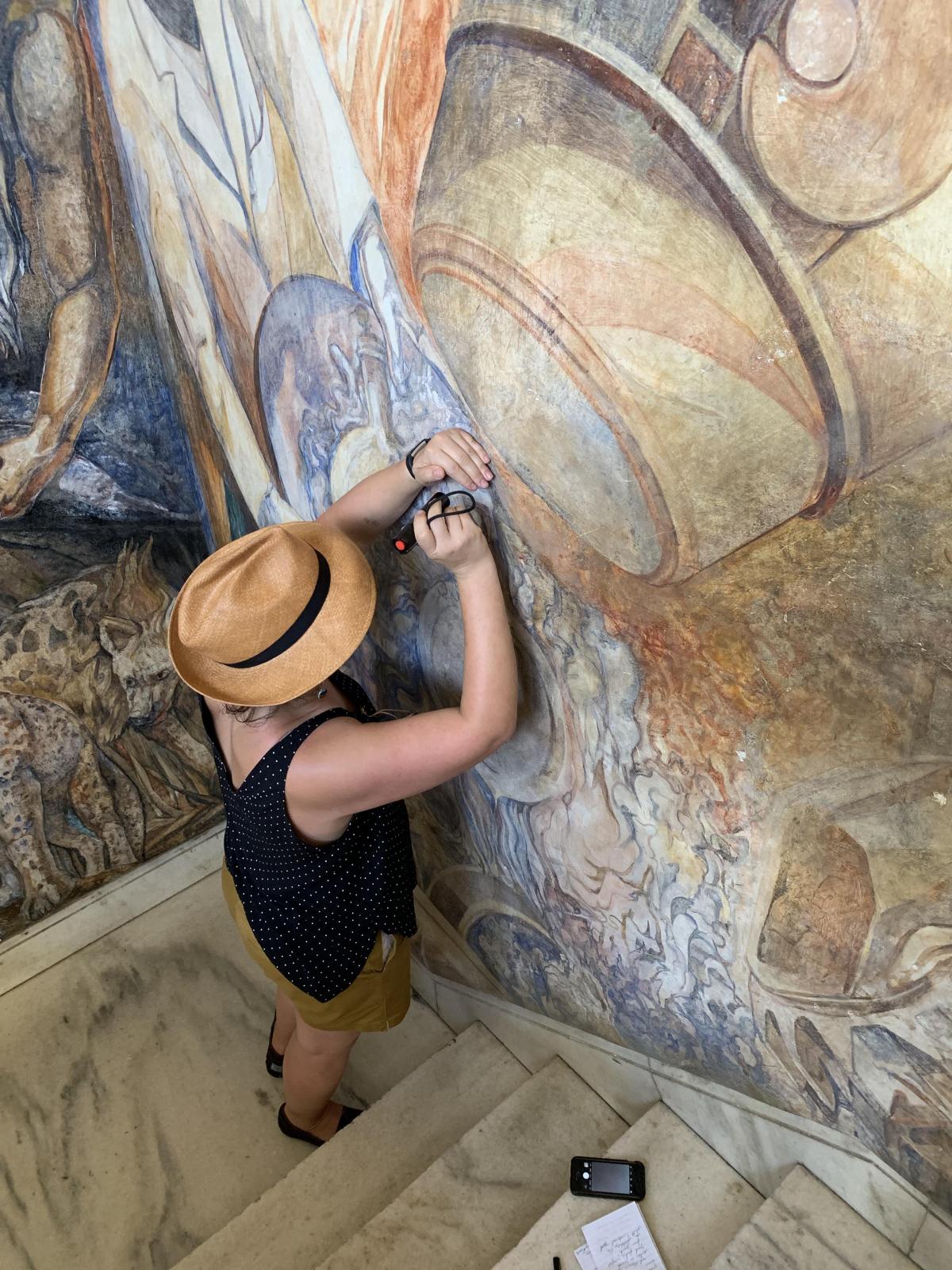 SAAM conservator Gwen Manthey examining a mural at the University of Puerto Rico.

Was there anything that surprised you the most?

A: There was one site I visited that had several paintings that had been exposed to the full force of the hurricane when the roof was torn from the building they were in, and then they were exposed to three months of weather before crews could get to the room they were in due to the devastation surrounding this building. What was remarkable is the paintings had been conserved a few years prior to the hurricane, and at that time the conservation lab that worked on them recommended that the paintings be housed behind protective glass and the reverse of the painting be covered with a protective backing board and then sealed within the frame to create a micro-environment that would protect the painting from the high humidity in Puerto Rico. This rehousing actually saved the paintings, as there was little if any damage to the canvases that were protected within the frame, even though the frame had suffered damage.

Is there a national collection similar to the Smithsonian that you visited?

A: One of the sites I worked at was the Museo de Arte de Puerto Rico (MAPR) in San Juan. The collection had been exposed to high levels of humidity after the storm due to the loss of power. The museum was fortunate to have a backup generator that they were able to use for twelve hours a day for close to three months before they had fully restored power. I met Acting Executive Director Marta Mabel Pérez prior to the examinations. It was such an honor to meet her, as I had just attended the American Alliance of Museums (AAM) annual meeting in New Orleans where she was awarded recognition for her response to the disaster and MAPR’s collaborative support of other institutions during the relief efforts.

She told me how MAPR had immediately reached out to the Smithsonian Institution after the hurricane, as MAPR is a Smithsonian Affiliate, and received a $75,000 grant in record time for the purchase of diesel to keep the museum’s power generator operating. MAPR was then able to assist smaller institutions by providing a safe regulated shelter for 224 artworks and cultural items, transforming itself into a “great cultural vault” in this critical time.

What was the range in dates of the artworks?

G: That depends on the setting. While the artworks in Arecibo were mostly contemporary paintings, the rare book library at the University of Puerto Rico has works that range from the fifteenth to the nineteenth century. The Rare Book Rooms are also in charge of caring for some very unusual material, including nineteenth-century ceremonial sabers and the plaster and bronze death masks of Juan Ramón Jiménez.

A: Most of the artworks I examined ranged from the colonial period of Puerto Rico to modern day and included a range of materials, not just paintings. The need was so great that I basically examined anything needed. I was quite grateful for the diverse training I had received during my graduate studies.

What are next steps?

A: The Smithsonian Cultural Rescue Initiative will continue to collaborate with FEMA to provide whatever professional assistance is needed to help Puerto Rico continue to protect and conserve its cultural heritage. In addition, there are several institutions and graduate training programs in the U.S. that are making arrangements to go to Puerto Rico to help train representatives on disaster preparedness and recovery.

G: I think it is of great value for conservators to get to Puerto Rico to assist in training. Workshops can be developed to teach collections managers and future conservators in handling, rehousing, and some remedial treatment steps, including mold remediation, dusting, and work to address the needs of the artworks at risk. Some of the more in-depth treatments can take place under the supervision of trained conservators with the individuals who demonstrate the hand skills, attention to detail, and long-term interest in pursuing conservation.

What preventative steps can people do to preserve their cultural heritage from natural disasters?

G: The big thing is to identify those materials a person or institution is invested in safeguarding. While digitization is not a guarantee against loss of an artifact, if those materials are lost, at least the information can be recovered thanks to digitization. An inventory, including photographs of one’s possessions should be filed with insurance and updated regularly. Then, it becomes easier to determine the budget and time needed for proper housing, storage, and developing an action plan in the event of an emergency.

To learn more about the impact of climate change on cultural heritage and communities worldwide watch the live webcast of Heritage at Risk: A Dialogue on the Effects of Climate Change Friday, March 6, 2020 at 5:30 p.m. The discussion with six specialists in the field of cultural heritage is moderated by Julian Bickersteth, president of the International Institute of Conservation of Historic and Artistic Works (IIC).

To learn more about the rich holdings of Puerto Rican art in SAAM’s collection, check out the companion blog post to this story, by Acting Chief Curator and Curator of Latinx Art, E. Carmen Ramos.