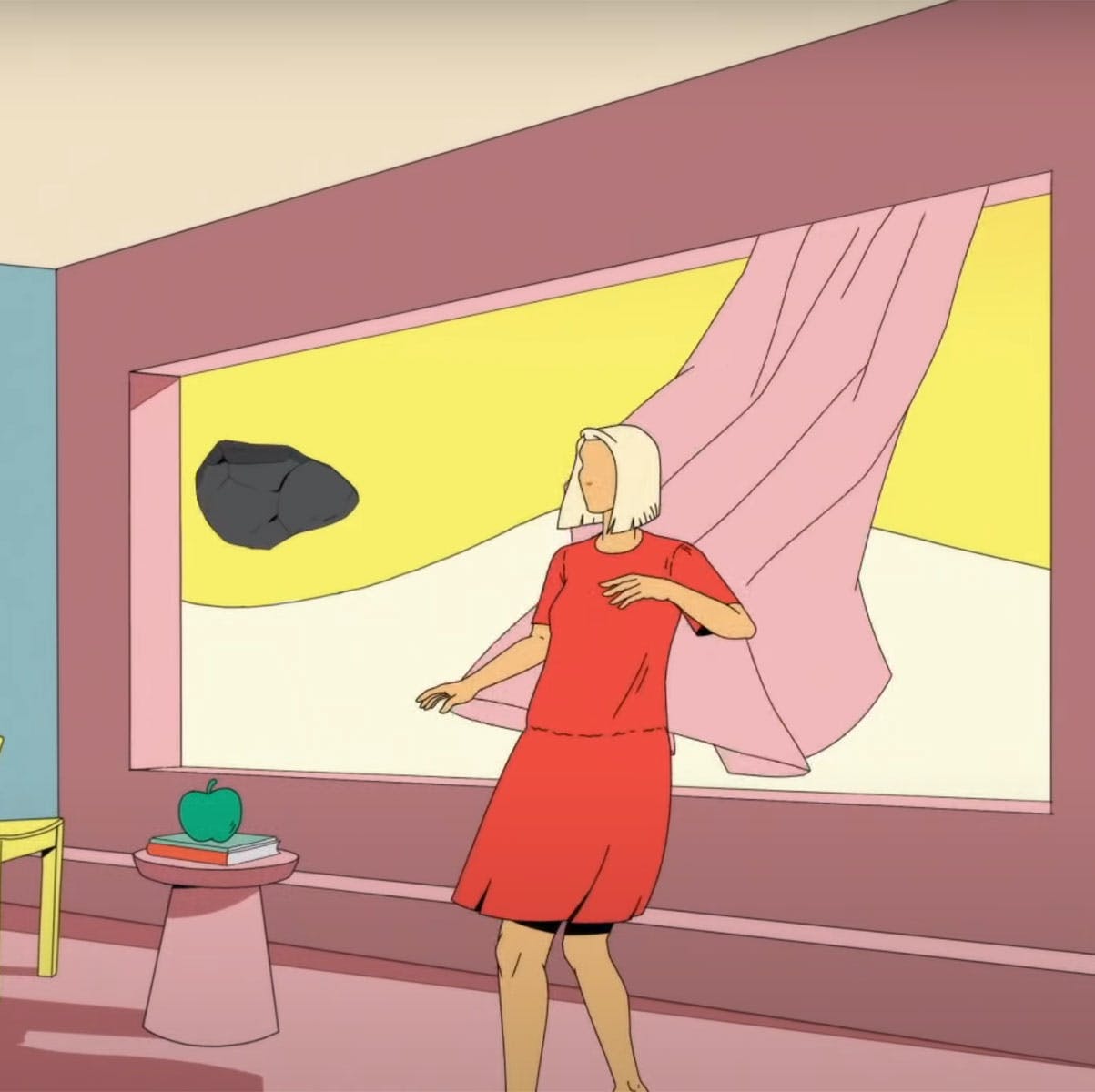 The year in music has been a strange one at best. Yet despite the struggle, uncertainty and limitations the pandemic has placed on the music industry this year, thankfully music videos have still been created.

The pandemic has impacted the style of work being made, however. For instance, we’ve seen an influx of animated promos from big name stars, including Dua Lipa, Billie Eilish, Beabadoobee and The Strokes. We’ve also seen an adoption of other techniques which avoided the need for live-action shoots, with some musicians opting for CGI such as Ashnikko and Blackpink, or teams using stock imagery in clever ways.

There’s been shift in the way artists are using music videos too, often giving them more weight or featuring them as part of a larger project. Beyoncé launched Black Is King in July, a musical film and visual album she wrote, directed and produced, which then saw a series of separate music videos released as part of it. And then there was Riz Ahmed’s The Long Goodbye, a short film directed by Aneil Karia that was released at the same time as Ahmed’s album of the same name.

From artists big and small there have been mammoth efforts made to create videos that feel original, innovative and entertaining. So to celebrate, here are ten of our favourites.

Salvatore Ganacci: Boycycle. Director: Vedran Rupic. Production company: Business Club Royale
We featured the pairing of Salvatore Ganacci with director Vedran Rupic on our best of list last year, and here again they’ve created something bizarre and brilliant, which sees Ganacci transformed into a half-man, half-motorbike hybrid, like a centaur for the industrial age.

In this coming of age tale Boycycle is discovered by an old man who cleans and nurses him back to health before chaos ensues. What makes this video most unnerving is the realistic nature of Gannaci’s jarring transformation, which was made possible by the VFX team at Haymaker in Sweden.

Piero Pirupa: Braindead (Heroin Kills). Director: Yousef. Production company: Prettybird
We featured the video for Piero Pirupa’s Braindead (Heroin Kills) dance track on the CR site back in March, which stars actor Shaun Williamson, aka Barry from Eastenders, a stalwart of British pop culture. Since his role on the soap came to an end in 2004, Williamson has made comedy mileage out of Barry, most notably in Extras, where he leaned into the tragicomedy of his character.

Award-winning director Yousef worked with production house Prettybird on the video, which sees Williamson speaking about the perils of drug use in a public service announcement style, before he himself is taken on a hallucinatory trip. The video is a nod to Brass Eye’s classic Cake report from 1997 and does a great job at assaulting the senses on all sides.

The video took a month to produce and features two forms of deepfake technology – a traditional method which places the whole face of another celebrity onto existing video footage, alongside a more groundbreaking method that creates animated video content from a single still image. Bill Posters, the founder of Big Dada Limited, and his team created lip sync videos that were used to create thousands of AI-generated animations from portrait photographs of celebrities.

Due to the constraints of lockdown, the directors combined their own style with their love of graphic novels and created a surreal, animated world full of clean lines and bright colours, which saw a faceless female protagonist beating off large rocks and objects in her house. One of many animated videos from this year, Daisies stands out because of its distinct visual style.

Disclosure: My High (feat Aminé and Slowthai). Director: Simon Cahn. Production company: Division
Filmed in Mexico City and starring Marco Escobar, this video for Disclosure’s track My High sees a young man taken to A&E after a car accident, but unfortunately for him, his ordeal doesn’t end there.

Directed by French filmmaker Simon Cahn, the young guy ends up in a number of hilarious and extreme scenarios, with guest vocalists Aminé and Slowthai only adding to the cartoonish madness. Continuing the theme of chaos in this list, it makes sense that the video was awarded best UK dance/electronic video at this year’s UKMVAs.

Bronson: Keep Moving. Director: StyleWar. Production company: Smuggler
Another UKMVA winner was this clip for Bronson’s track Keep Moving, which was awarded Best Lockdown Video in the Special Projects category. It sees Swedish director collective StyleWar take us back to the office, but this time there’s no jokes by the water cooler or Powerpoint presentations to yawn at, instead it’s pure carnage as suited workers tumble down escalators and bosses ignite into flames.

The video has been created entirely out of stock footage of fluorescent-lit offices and large corporate meeting rooms, filled with gormless smiling employees, which are then completely disrupted and warped using various clever visual effects. After sourcing the appropriate footage, the team shot matching close-ups of mouths lip-syncing the lyrics. They also built the offices in full CG to match the look of the stock footage. The video is a dystopian ode to office life and serves as a reminder that maybe remote working isn’t as bad as we think.

Idles: Model Village. Directors: Michel and Olivier Gondry
Created in collaboration with WePresent, the video for Model Village brings small-town mentality to life through paper collage and CGI. The video was directed by Michel and Olivier Gondry who, as well as their individual projects, have been celebrated for their joint work for The Chemical Brothers over the years.

Another video created in lockdown, it pays tribute to the socio-political themes in the Idles’ track by creating a paper cut-out village inhabited by pig-like cartoon characters, in reference to the lyric, “There’s a lot of pink skin in the village”. Michel worked on the hand-drawn bits of paper in his LA studio, building and filming different parts on his iPhone. Olivier then took these collages and brought them to life through CGI. The aesthetic is like a happy, children’s TV show, but there’s darker undertones throughout, with a dash of the surreal thrown in, which keeps viewers hooked.

FKA twigs: Sad Day. Director: Hiro Murai
The end of summer saw FKA twigs collaborate with director Hiro Murai, best known for his work with Donald Glover on TV series Atlanta and Childish Gambino music video This is America. The video for Sad Day, taken from twig’s sophomore album Magdalene, was inspired by the three years of training she had in the Chinese martial art of Wushu, under the guidance of Master Wu, the highest ranking Wushu master in the West.

Filmed in London pre-lockdown, the video stars twigs alongside actor Teake and sees the musician transform into the hero she always wanted to watch in mainstream cinema while growing up – putting her skills with a sword to good use in the process. In CR’s interview with Murai from October, he said of the project: “It felt like a very crazy gift. It felt like someone handed me the key to a sports car or something, where she’d been rehearsing Wushu for three years, and she had this skill but didn’t know what to put it in, so now it was my job to come up with a vessel for that three years of hard work.”

Slowthai: Feel Away (feat James Blake and Mount Kimbie). Director: Oscar Hudson. Production company: Pulse Films
Another bonkers video, proving that this year we all needed a bit of escape from the monotony and heartache of everyday life. This time it’s director Oscar Hudson’s promo for Slow Thai’s Feel Away, which features the melodious musings of artists James Blake and Mount Kimbie. Set on a maternity ward where Slowthai is revealed to be the pregnant one, the video is shot in a POV style, making it feel like a cross between an episode of Peep Show and Alan Brooking’s classic ad The Pregnant Man.

The best part though? When the rapper and his newborn baby turn disturbingly into cake and Slowthai’s limbs are gobbled up. The baked elements were created by hyperreal cake maker, The BakeKing, who we spoke to back in November. “It was the first really weird concept I’ve done, which was so up my street,” he said in the piece. “I like to be as much out of the box as possible with my designs; I’m always trying not to step over the line and having to rein myself back in, so when they got in touch with me about that it was amazing. I’d wanted to make a baby for ages but I just thought it was possibly a step too far. I didn’t know how it would be received, and I couldn’t possibly cut it….”

Tierra Whack: Dora. Director: Alex di Corte
The video for Dora, which came out late October, accompanies Philadelphia rapper Tierra Whack’s first new music since she released her song Stuck, which riffed on Alanis Morrisette’s Ironic and was dedicated to those stuck inside during the pandemic. US-based conceptual artist Alex Da Corte has directed the animated clip for Dora and it’s a colourful, toy-like spectacle from start to finish.

With multiple surreal takes on pop culture and childhood favourites, the video features appearances from Sesame Street characters like Kermit and Gonzo, as well as scenes showing Whack, animated in 3D, riding on a plastic tortoise, and as a shiny, green M&M. It’s brilliantly strange, and suits the bonkers visual language Whack has started to establish in her videos.