The Compelling Life and Work of French Sculptor Camille Claudel 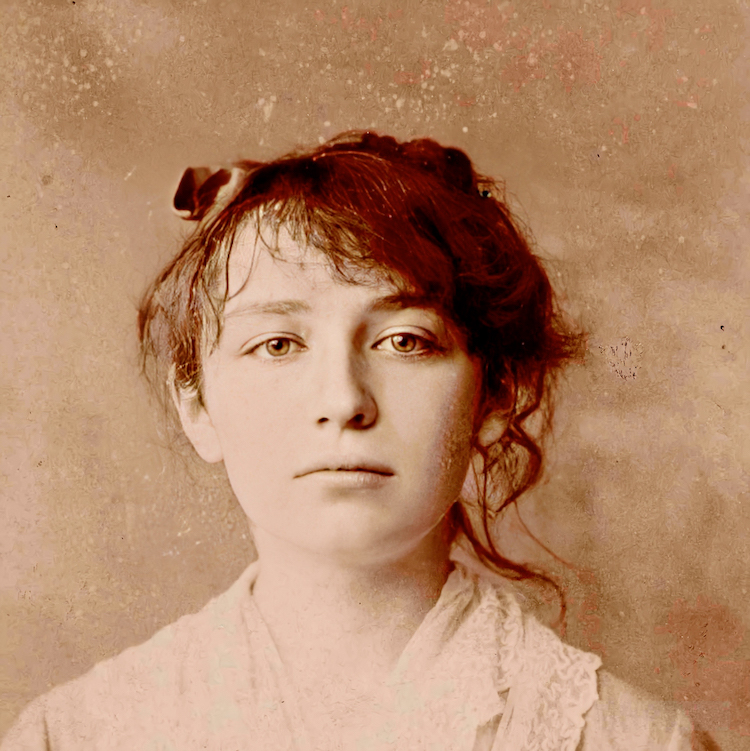 Throughout history, there have been many sculptors who have made a name for themselves. One is Auguste Rodin, the famous 19th-century French sculptor who created iconic pieces such as The Thinker, The Kiss, and The Gates of Hell. However, there are perhaps just as many artists who have gone unnoticed—particularly women. In fact, it is far less likely that you’ve heard of Camille Claudel, a female French sculptor who worked very closely with Rodin for a portion of her career. During their time of association, Claudel was Rodin’s student, assistant, muse, and lover. But more than that, she was an incredible sculptor in her own right—no easy feat for a woman during that period.

Still, despite the raw talent and drive that Claudel possessed, she—like many artists (especially female ones)—did not receive the success and acclaim she so desired and deserved during her lifetime. Though not entirely unknown and unsuccessful as an artist, her true importance was overshadowed by that of Rodin. Often confined by the rigid gender roles women were confined to and ultimately deserted by those she loved most, Claudel lived a tumultuous life that eventually came to a tragic and solitary end.

Though she died in almost complete insignificance, Claudel’s remarkable talent has since been rediscovered and celebrated to some degree. Read on to discover more about Camille Claudel’s fascinating life and career.

The oldest of three children, Claudel was born to a middle-class family in Fère-en-Tardenois—a small village in northern France—on December 8, 1864. Her father, Louis-Prosper Claudel, later moved the family to Bar-le-Duc In 1870. There, Camille received the beginnings of her education from the Sisters of the Christian Doctrine. 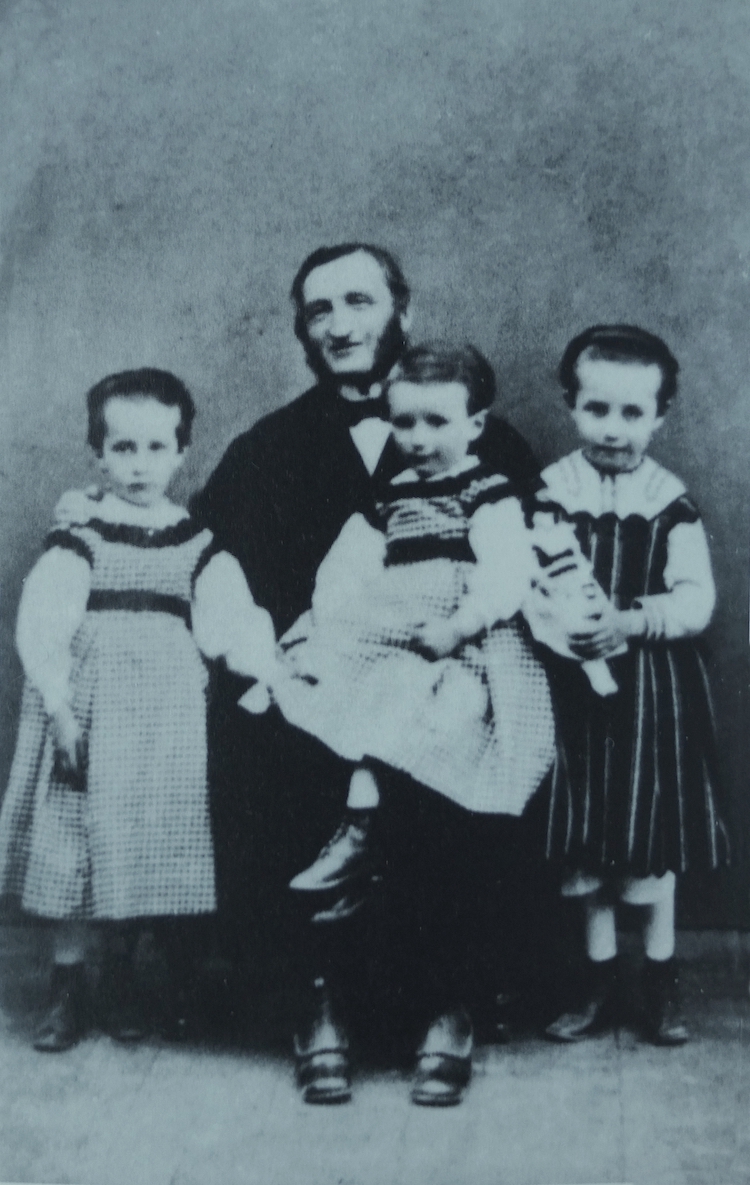 It wasn’t until the family moved to Nogent-sur-Seine in 1876 that Camille began to experiment with clay and start sculpting the human form. She was only 12 years old at the time, but her talent was already becoming apparent. Her father was receptive to this and sought the opinion of Alfred Boucher, a talented local sculptor. Boucher was immediately impressed by Claudel’s natural ability and took her on as a student and mentee.

While Camille’s father was extremely supportive of her development as an artist, it was a completely different story with her mother. Louise Anthanaïse Claudel didn’t want her daughter to pursue a vocation as an artist. Aligned with the societal norms of the time, Louise viewed the profession as “unladylike” and preferred that her daughter give it up and focus more on her marriage prospects.

Arrival in Paris and Further Education

In 1881, Louis-Prosper Claudel moved his wife and three children to Paris so that their son—Paul Claudel—could pursue higher education. Then age 17, Camille took this opportunity to continue her artistic training and enrolled at the Académie Colarossi—an art academy that was extremely progressive for its time, not only accepting women to study there but also allowing them to work from nude male models. 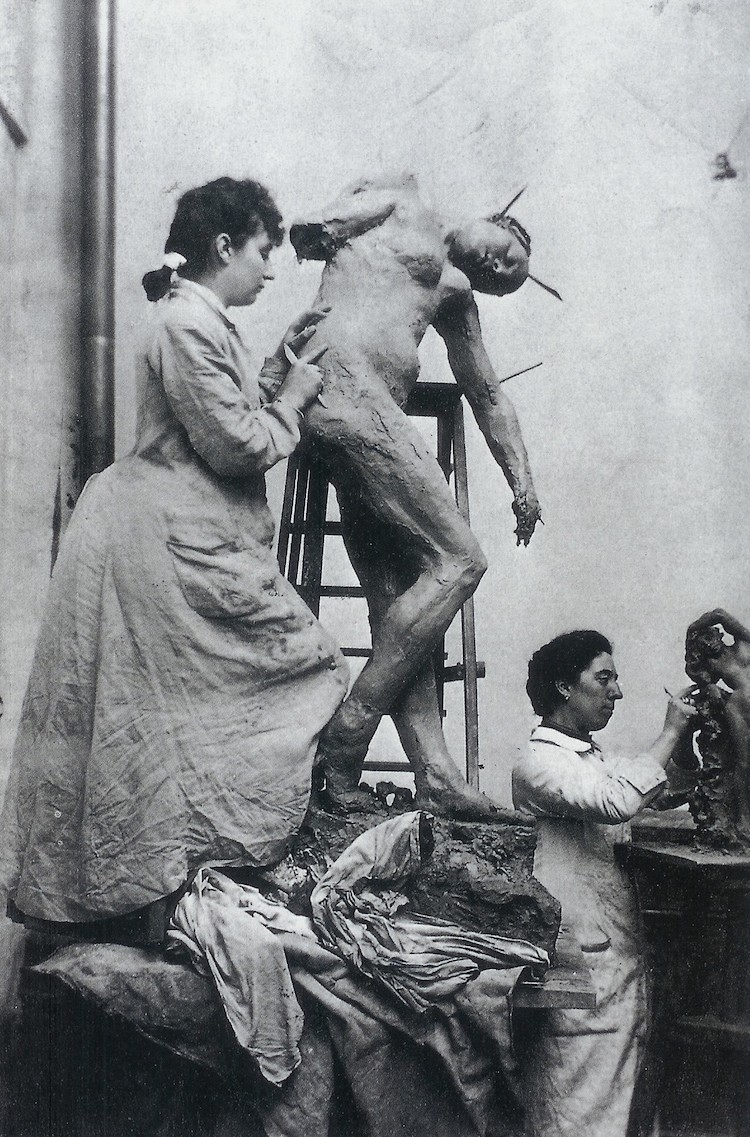 Boucher continued to mentor the budding sculptor. In 1882, Claudel decided to rent a studio, which she shared with three other young female sculptors from England that she had met at the Académie. Boucher would visit the studio once a week to offer guidance and critique their work. Camille was already developing a naturalistic style under his tutelage, which earned her some modest recognition from Paul Dubois—the director of the École des Beaux-Arts and fellow native of Claudel’s previous home, Nogent-sur-Seine—by way of an introduction by Boucher.

That same year, Boucher left Paris and moved to Florence, Italy. But before he left, he asked Rodin to take his place and continue to supervise and guide his pupils at the studio. It was there that Claudel and Rodin met, and that meeting marked a distinct shift that would completely alter the lives of both artists.

Rodin was immediately impressed by Claudel’s work—though she was but a young student. The gritty realism apparent in her early works such as Old Helen struck him, and he soon invited her to work alongside him as an apprentice in his own studio. Claudel officially joined Rodin’s studio around 1883, by which time the seasoned sculptor had already received some of his first major commissions. 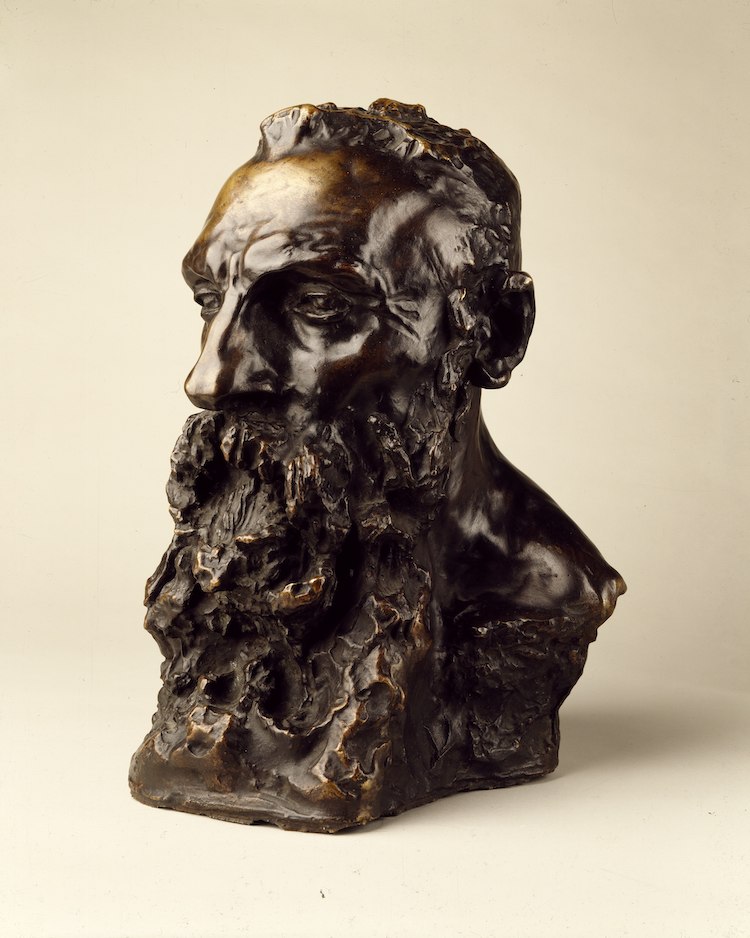 Claudel honed her skills in his workshop, learning from Rodin and contributing in equal parts as they worked on some of his most well-known pieces, including The Gates of Hell and The Burghers of Calais. But during her time working with Rodin, Claudel also made strides to assert herself as an independent artist. She exhibited regularly in the Salon des Artistes Français between the years of 1882 and 1889, and—by way of some connections made through Rodin—Claudel even had some of her pieces bought by French Museums in the 1890s.

Nonetheless, Claudel and Rodin’s relationship was far from just a professional one. The two had mutual respect and admiration for one another and had become engaged in an impassioned love affair not long after they met. Even more than his apprentice, she became his confidant, model, and muse. Rodin created several portraits of Claudel during this period—starting with Camille Claudel with Short Hair—and also used her as a model for portions of his larger works. He, in turn, was also a model for Claudel on occasion, most notably for her acclaimed work Bust of Rodin. The two artists’ creations mutually inspired and influenced one another as they worked together seamlessly, sharing both models and studios.

Claudel and Rodin’s relationship continued for over 10 years, but things were not always so good. In fact, their romance had sparked a great deal of controversy—one reason being their sizable age gap, with Claudel not yet 20 when they first met and Rodin already into his 40s. One other reason was his relationship with Rose Beuret, who—though they were never officially married—had been his partner for years. 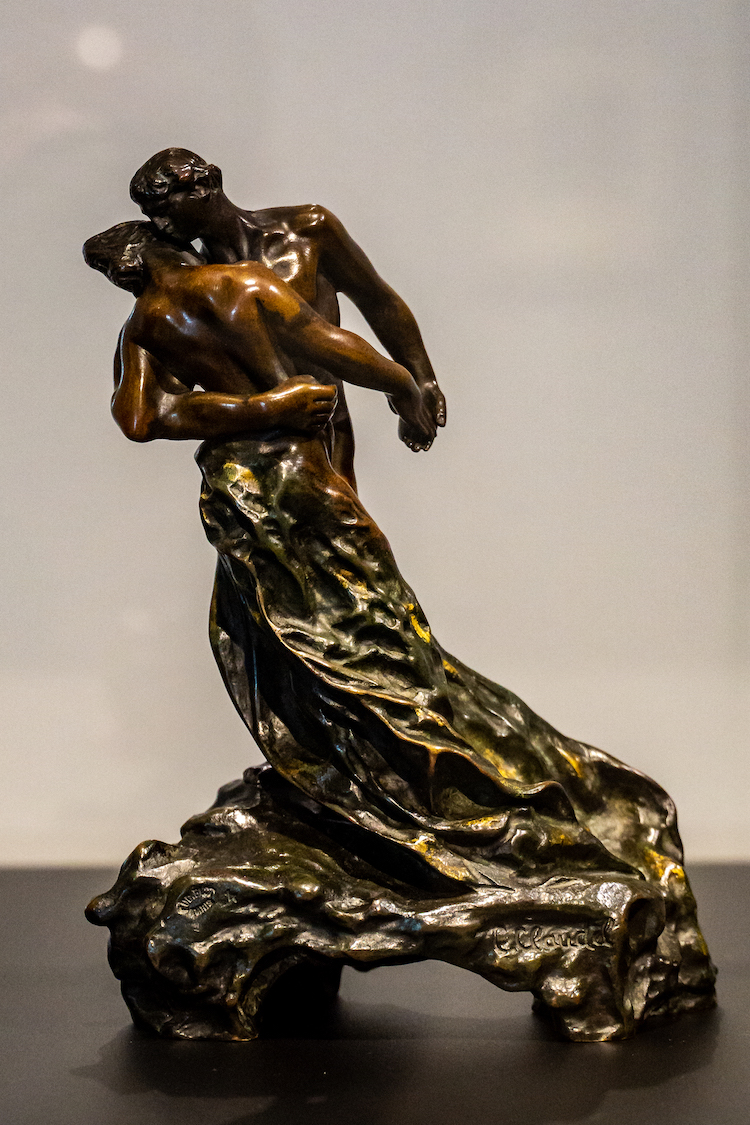 This second point was especially hard for Claudel, whose intense feelings for Rodin had grown sizably over the years, making it harder and harder for her to accept his relationship with Beuret. She had even gone so far on one occasion as to make him sign a contract promising to be faithful to her. Though Rodin had become so important in her life during their many years together, Claudel began to realize that he would never leave Beuret. This, and her ever-growing desire to emerge from Rodin’s sweeping shadow, spurred her to distance herself further and further from the artist—both personally and professionally—starting around 1892.

Though she had established and proved herself as an individual artist, people would always compare her to Rodin and attribute her talent and technique to the tutelage of the celebrated sculptor. Looking for a way to distinguish herself further from her former partner and assert her own creativity and genius, Claudel took a new direction with her work. She began to explore more intimate scenes, with more daring compositions, new subjects, and more difficult materials. Some of her most evocative and sensational work is from this period, including pieces such as The Waltz, The Wave, and Sakuntala. 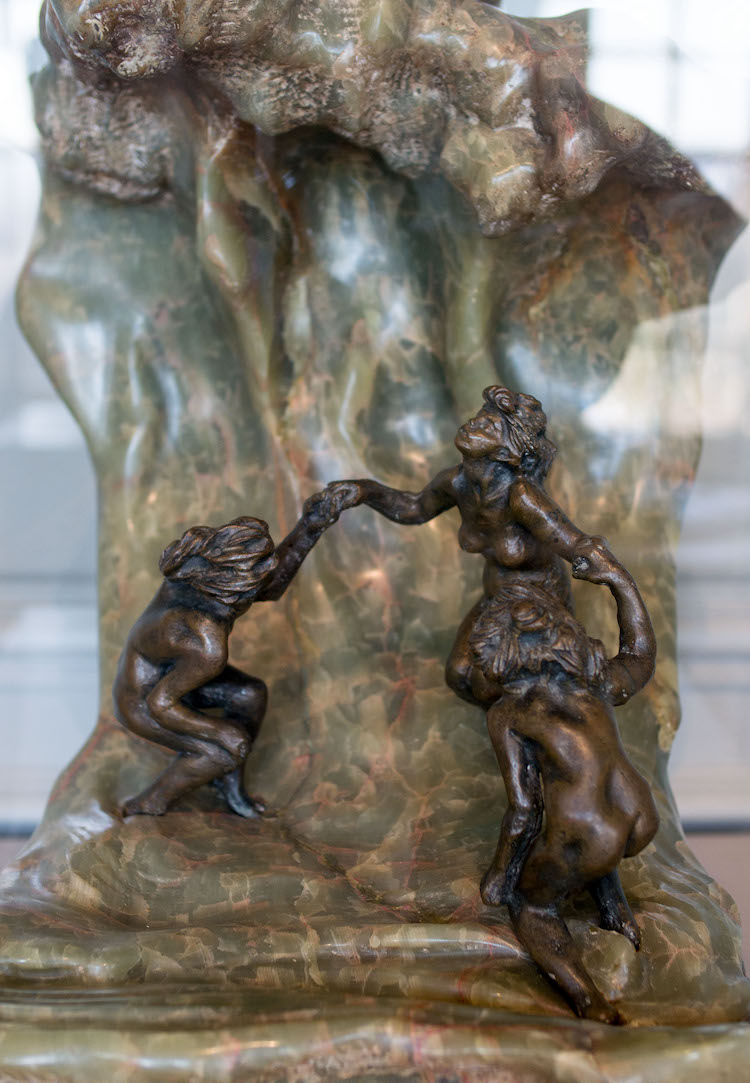 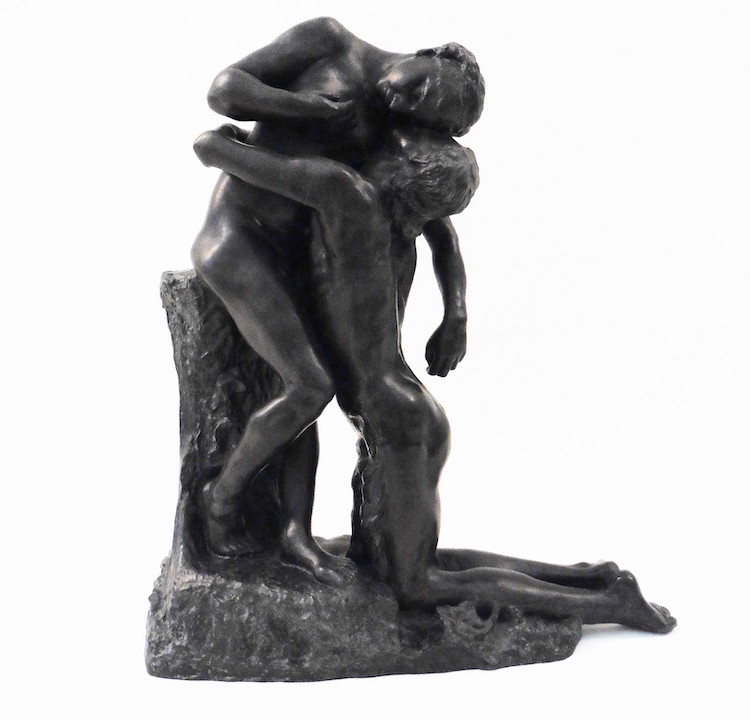 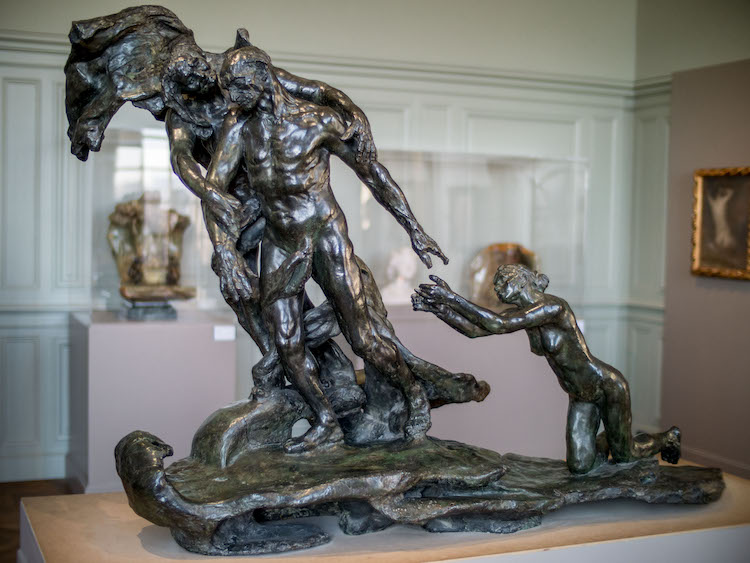 But the final and definitive break occurred between Rodin and Claudel with one of her most expressive and compelling pieces, The Age of Maturity. This incredible work depicts a young woman kneeling, reaching out towards an older man who is being pulled away from her into the rapacious embrace of a gnarled old woman. Though it is now often interpreted as an allegory of the three stages of life, many at the time of its debut saw the sculpture as an artistic expression of Claudel’s break with Rodin.

She had created this sculpture for her first commission from the French state in 1895, originally with the support and endorsement of Rodin. However, when he saw the sculpture for the first time, he was shocked, angry, and offended. He subsequently retracted his public support for Claudel’s work and severed all ties with his former lover. Her commission was also later revoked with little explanation, though many speculate that Rodin may have pushed the state to end its association with Claudel. 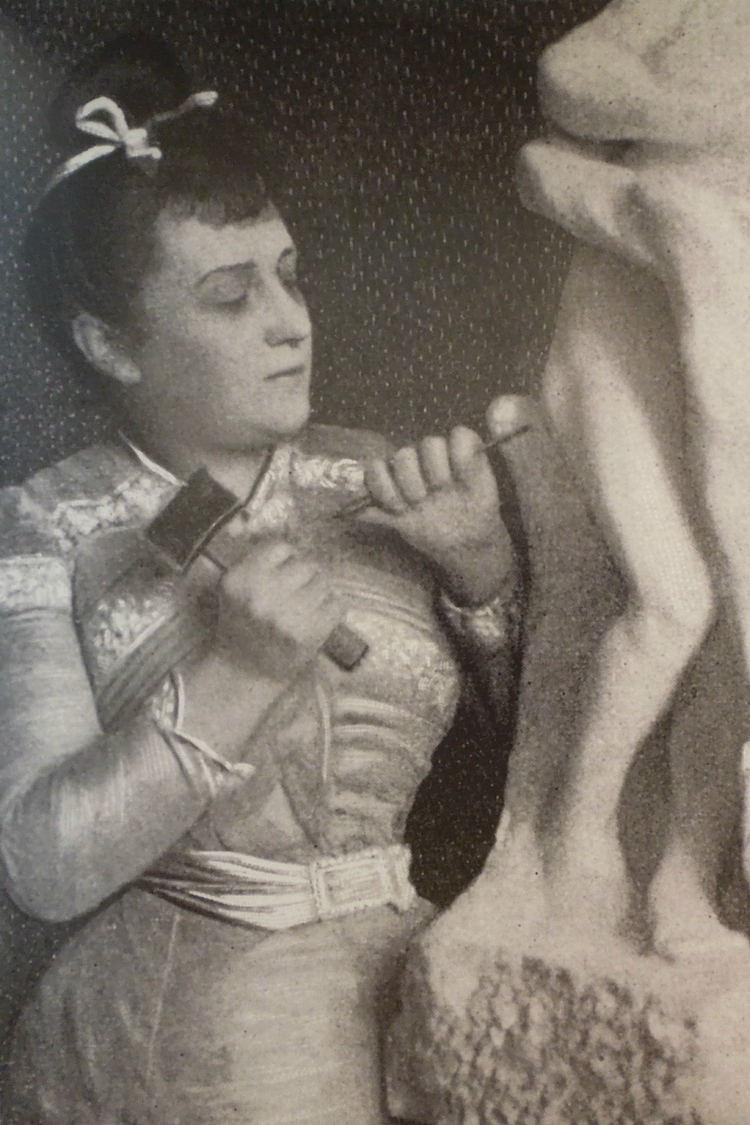 After this final break with Rodin, things rapidly began to decline for Claudel. Though she had wanted to distance herself from the artist, his public support and endorsement of her work had protected her to some degree from many of the sexist practices evident in their artistic vocation. She increasingly lost support because of the overtly sensual nature of several of her pieces, which was not deemed acceptable for a female artist.

As her career rapidly declined and she fell into financial ruin, Claudel became increasingly paranoid and convinced that Rodin was plotting against her to ruin her and steal her ideas. Because of this, she became more and more reclusive, destroying a large portion of her pieces to prevent Rodin from copying them and even refusing to sculpt anything new. By 1911, she had become a shut-in, her physical and mental health continually worsening.

In March of 1913, her father—who had always supported and championed her—died, and no one from her family informed her. Claudel’s relationship with her mother, which had always been fraught from the moment the young girl decided to be an artist, had only deteriorated further and further over the years as her indecorous relationship with Rodin and the “unladylike” nature of her work only deepened the rift between Claudel and her mother. 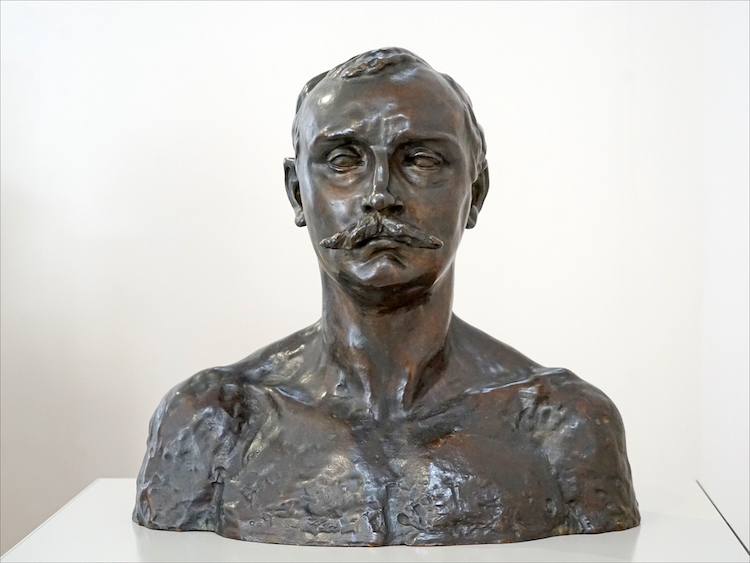 There isn’t much information about Claudel’s relationship with her two siblings over the course of her career, though she had completed several busts of her brother throughout the years and at least one of her sister on the occasion of her marriage. Still, only a few days after the death of her father, Claudel’s remaining family had her committed at the Ville-Evrard mental asylum.

She was later transferred to Montdevergues asylum in 1914—due to the outbreak of WWI—and remained there until her death on October 19, 1943. Over the course of her 30-year confinement, she received very few visits from her family or friends. Claudel spent the rest of her days in isolation, removed from all the things that had once made her life vibrant.

“I have fallen into an abyss,” the artist wrote to one of her few remaining contacts during her time at Montdevergues. “I live in a world so curious, so strange. Of the dream that was my life, this is the nightmare.” After Claudel’s lonely death, her body was buried in an unmarked communal grave on the asylum grounds.

In spite of the unjust decline of her sculpting career as well as her life’s tragic ending, the world has once again started to take notice of the work of Claudel. So compelling is her story that it has even been the inspiration for books, plays, films, and even a musical. Before his own death in 1914, Rodin approved plans to add a Camille Claudel room to his museum. These plans were completed in 1952 when Claudel’s brother, Paul, donated several of his sister’s works to the Musée Rodin.

Furthermore, Claudel finally received the distinction and recognition for her own artistic merit that she so desired and deserved during her lifetime when the Musée Camille Claudel was opened in 2017. The museum is made up in part of the artist’s childhood home and features around 40 of her surviving works. Thanks to this, her incredible talent and contributions to modern sculpture are now being recognized and celebrated in a way that they never could have been during her lifetime.

The Life and Work of Barbara Hepworth, a Modern Master of Abstract Sculpture

10 Great Sculptors Who Changed the History of Art

How To Organise Your Room Like The Amazing Marie Kondo & 4 Boxes!