The Design, Forgotten Village, & Many Features of It 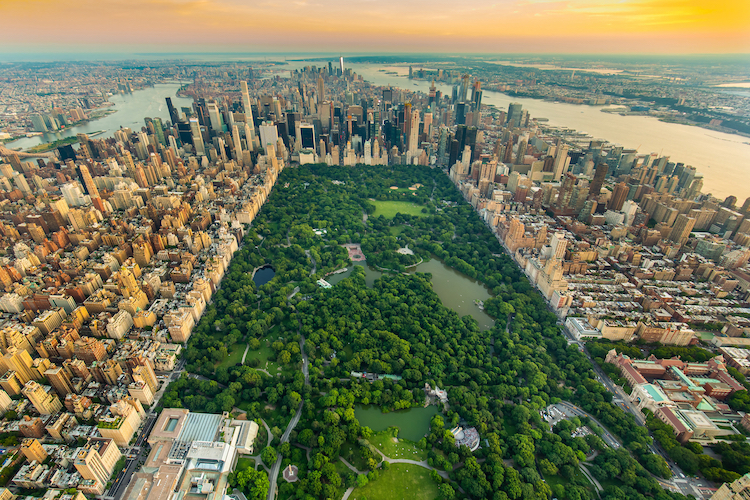 Long ago, New York City’s iconic gridded streets left little room for green spaces. But around the 1840s, New Yorkers were growing tired of having to find refuge from city life in cemeteries and other unlikely places. From this discontent, Central Park was born.

The land chosen for the park was the site of small villages and institutions such as Pigtown, a covenant and school at Mount St. Vincent Academy, and the now-famed but once forgotten Seneca Village. All of these lands were seized through eminent domain to make room for Frederick Law Olmstead and Calvert Vaux’s “Greensward Plan” for Central Park.

Today, the park serves almost 40 million annual visitors and is the most popular urban park in the United States. It’s even the most filmed location in the world. So, what makes this park so special and why is it such an important example of landscape architecture? In this article, we will cover the design story behind Central Park’s creation, some forgotten history surrounding the previous residents of Central Park, and individual design elements that define it.

Building a Park for the People 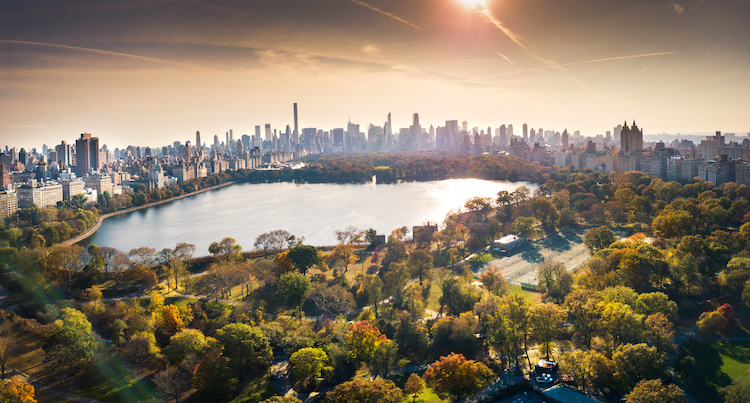 Central Park’s design was the result of a public competition won by Calvert Vaux and Frederick Law Olmstead, the “father of American landscape architecture” and a then-journalist. The park was marketed as “a park for the people” and meant to be accessible to everyone. The entranceways, for example, were not designed with grand archways or with significant signage. Instead, wide walking paths invite passersby to enter and walk through without feeling that they were imposing on private property.

Besides this mission of equity, the “Greensward Plan” had another key feature that distinguished it from the rest of the proposals. The park should not blend in or integrate into New York City. Instead, it would come to a clear end that would bluntly contrast city and nature. It would also not try to meet the rigid grid system of New York but would be full of picturesque meandering paths that would form its own organizational logic. 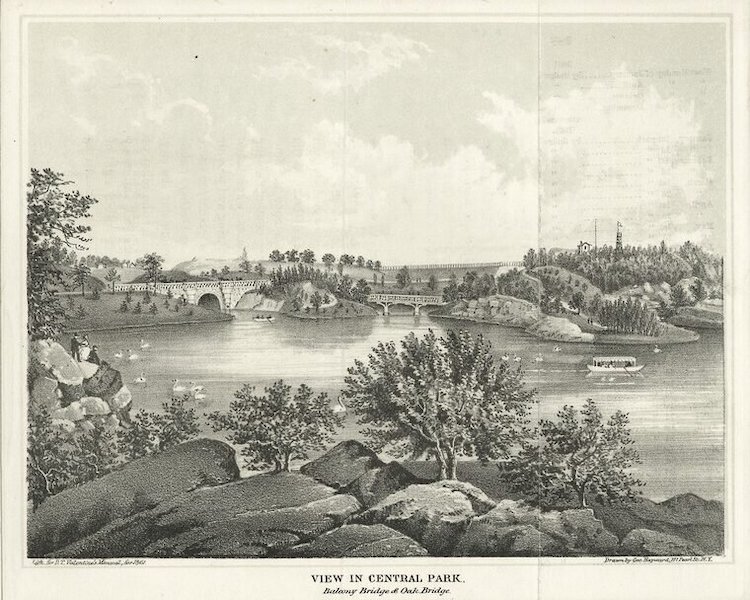 One of the most notable periods of the park’s long history of construction and constant additions is the renovation managed by legendary—and extremely controversial—city parks commissioner Robert Moses. When he was appointed in 1934, the park was in serious disrepair. He renovated the park and introduced countless radical changes; for anyone disappointed in the lack of sheep in Sheep Meadow—you can point the finger at Robert Moses.

The Central Park Conservancy is a nonprofit that now manages the park and ensures its history and design is preserved. 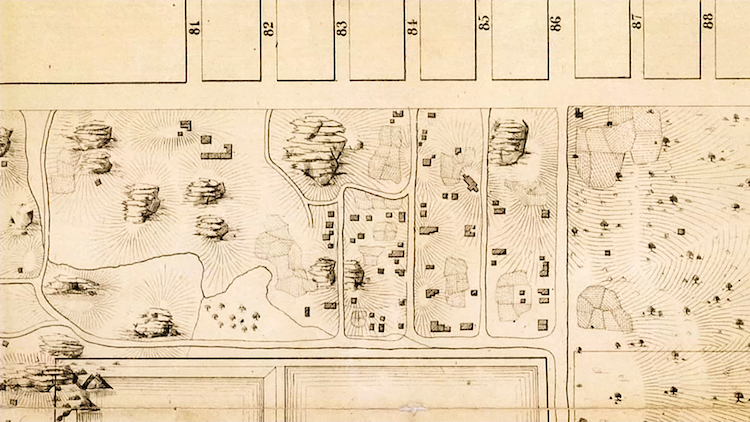 Along the edge of what is now Central Park—from about 82nd street to about 29th street—stood the largest home-owning Black community in New York City. It was part of the vast amount of land seized by eminent domain to make way for the park’s creation. Though it was not the only village taken over, it made a significant impact. About 20% of New York City’s property-owning African-American population was displaced when Seneca Village was torn down.

The community was about two-thirds African American and one-third Irish immigrants, though some German immigrants also lived there.  It is believed that Black New Yorkers moved to this area for relief from racism and poorer living conditions in the downtown of the city. It is also important to note that owning property was an important factor in voting eligibility—of the only 100 Black New Yorkers able to vote in 1845, 10 of them lived in Seneca Village.

Though the history of Central Park and the quaint story of Olmsted and Vaux are fairly well-known stories, Seneca Village was long forgotten. Researchers in the 1990s uncovered items that helped the world remember the once vibrant community.

The now long-gone churches, cemeteries, and homes of these residents were dug up and help us understand daily life from before the park. Information can be found on signage in Central Park near the area where the community once stood. 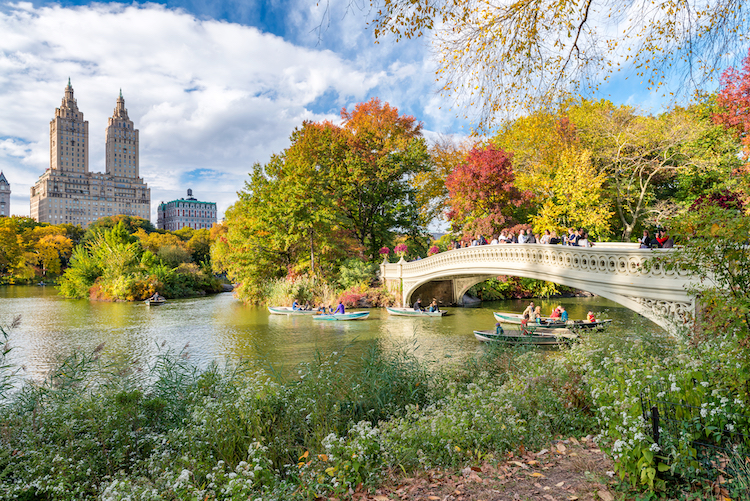 Now that you know a bit about the historic events and figures that influenced this historic park, let’s look at some of Central Park’s most famous attractions and design features. 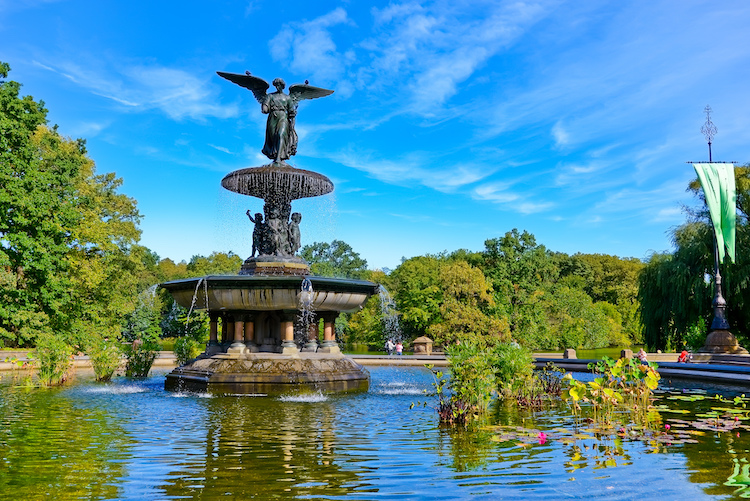 Bethesda Foundation and the iconic Angel of the Waters statue sit in the center of Bethesda Terrace. The fountain sculpture was designed by Emma Stebbins in 1868 and is historically significant; it marked the first time a woman received a public commission for a major art piece in NYC.

Two grand staircases frame the scene from beyond the fountain and connect both levels of the terrace. The arcade boasts the only ceiling in the world that features Minton tiles, and it has undergone serious restoration to preserve its unique design. The terrace is also notable for being the final destination at the end of the Mall (or Literary Walk). 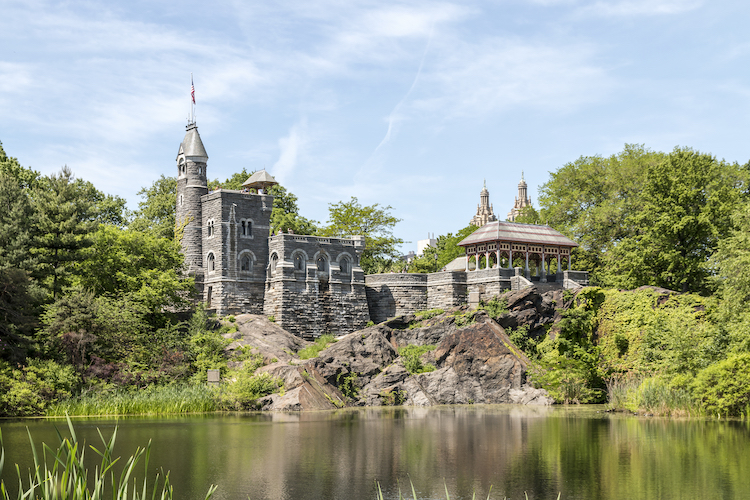 Belvedere Castle is another design feature that was included in the original Greensward Plan. The name belvedere comes translates to “beautiful view” in Italian. This moniker is fitting as the small castle was designed to provide the best view of Central Park from its elevated platform. 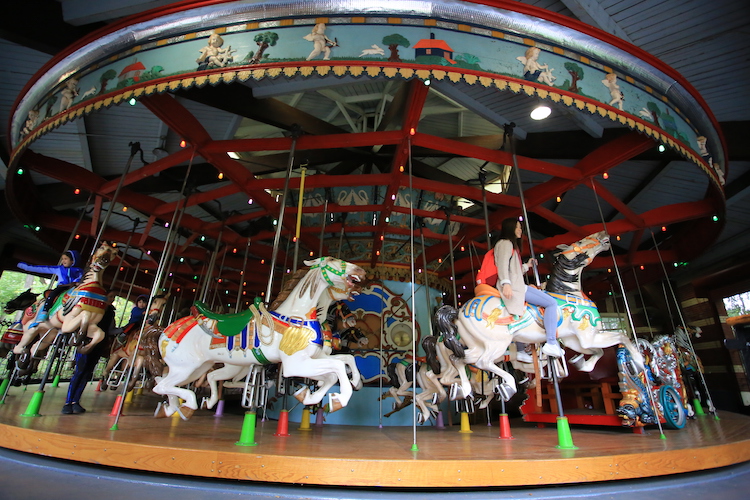 Did you know that the original Central Park carousel was built in 1871 and was powered by a mule or horse? The carousel has come a long way since then and has undergone a series of iterations as multiple versions burnt down. The current carousel is the fourth of its kind. 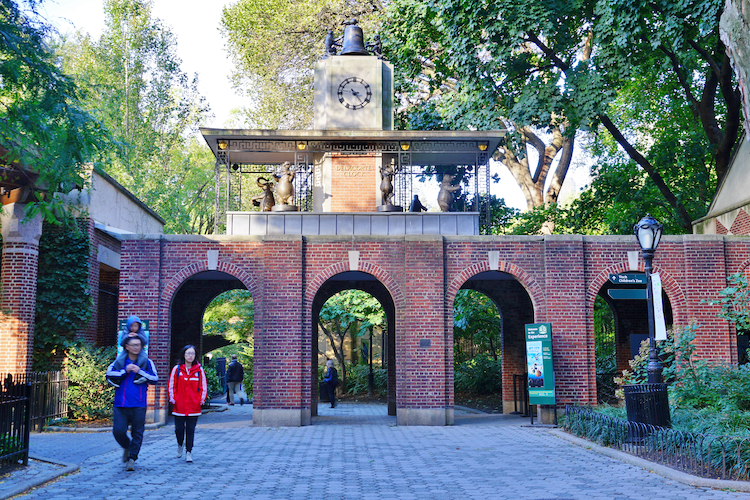 The Central Park Zoo is an extension of what was originally the menagerie—the first public zoo in New York. The menagerie was not part of the original Greensward Plan, but the idea for its design became more popular as New Yorkers slowly became interested in wildlife and donated animals to the park. The Central Park Zoo is now part of five facilities operated by the Wildlife Conservation Society. 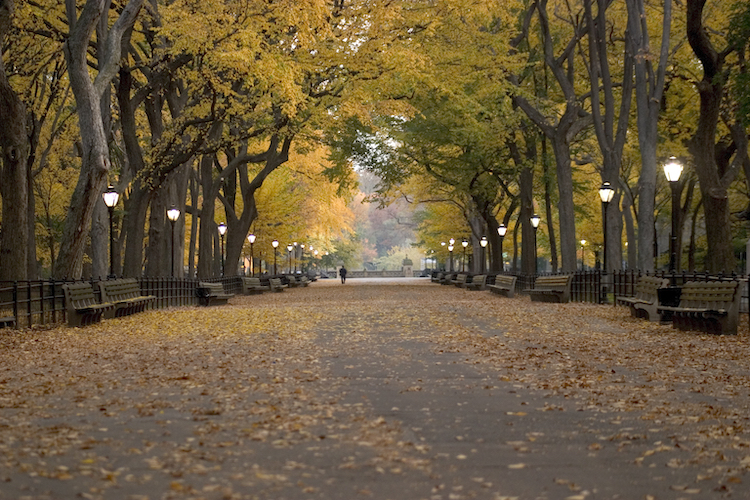 Can you guess what makes this promenade so different from the rest of the park? As you might remember from our summary of the park’s initial design, walkways were designed to be picturesque and not linear like the NYC grid system. The Mall, or Literary Walk, is the only deliberate straight line in the park’s design. It is also the central “formal promenade” and was designed aligned with the designer’s “park for the people” mission. It was meant to prove that people of all different backgrounds could coexist in one public space. The area gets its nickname of Literary Walk from four statues: William Shakespeare, Robert Burns, Sir Walter Scott, and Fitz-Greene Halleck.

Loeb Boathouse on the Lake 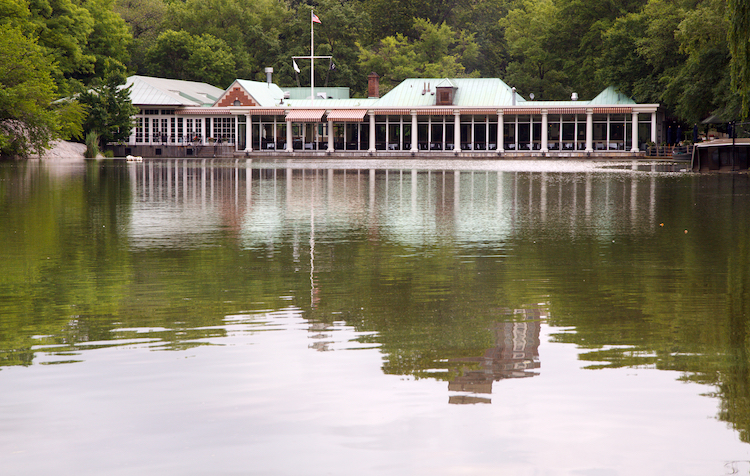 The Loeb Boathouse is a long-standing boat landing on the lake that now includes a formal dining room, outside dining areas, and a concession stand. It was originally proposed by Olmsted and Vaux in order to store rowboats. This original Victorian style boathouse was destroyed by 1950 and was replaced four years later with the structure that currently stands in its place. 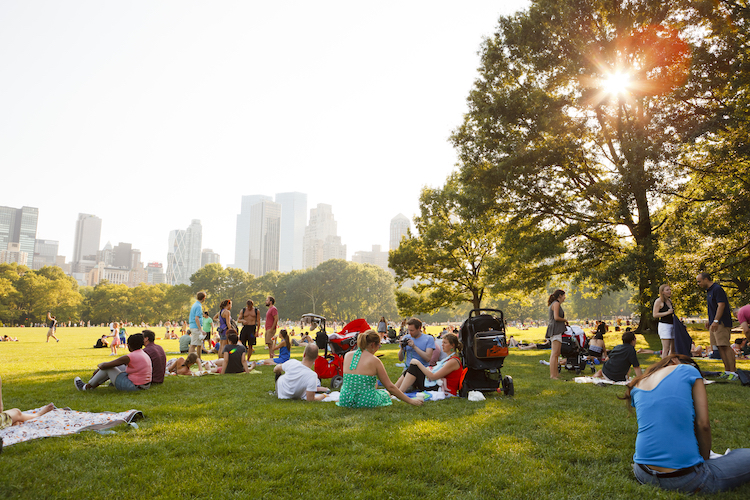 This 15-acre field was included in the original Greensward Plan as a “parade ground” for marches and similar events, though Olmsted and Vaux did not want anyone using it for this purpose as they thought the serene area should be unmarred by military events. They eventually did get their wish when the park commissioners disregarded this previously mandatory design requirement and allowed the area to instead become a pasture. Real sheep enjoyed Sheep Meadow from 1864 to 1934 until the city park commissioner Robert Moses removed them. 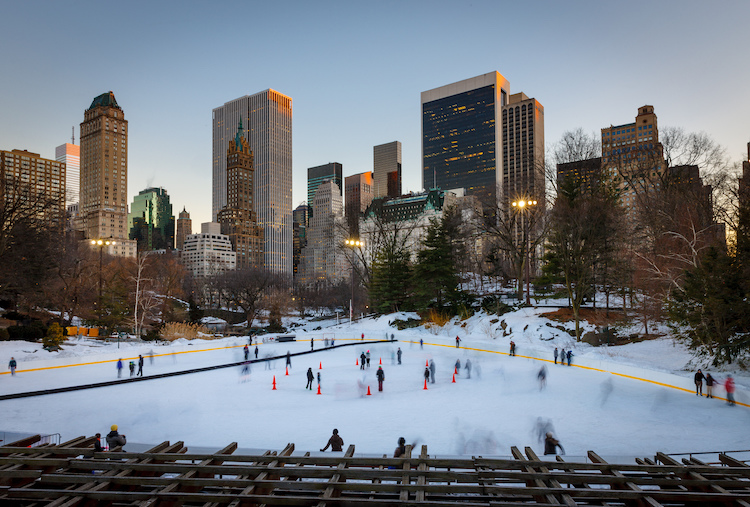 The Wollman Ice Rink is at the southeast corner of Central Park. It was first built in 1949 when a portion of the lake was drained to make room for skating. Visitors can now glide on the rink all year round with ice skating in the winter and in-line skating in the summer.

This map of Central Park shows where the biggest attractions are located. 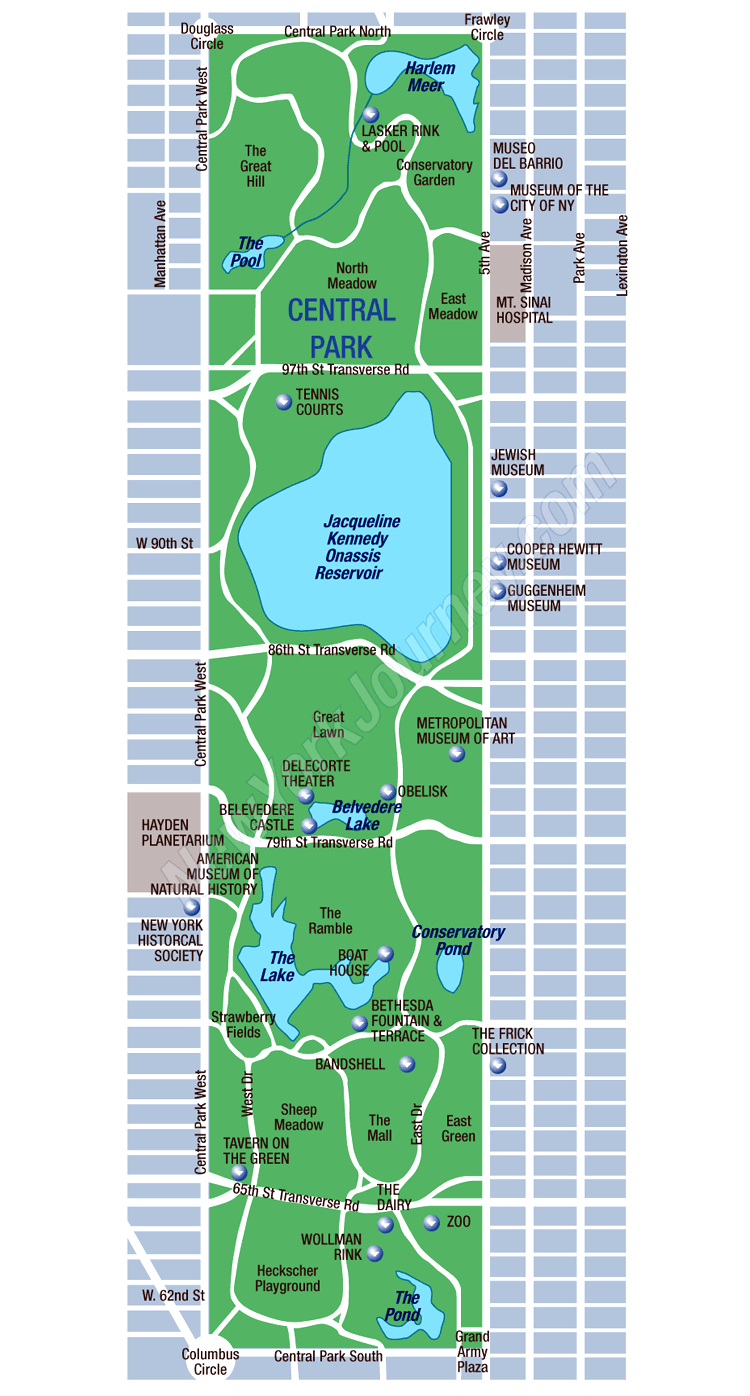 Beautiful Watercolor Painting of Central Park in the Fall