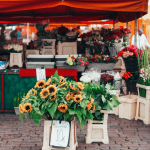 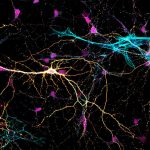 Highly commended images from the wildlife photographer of the year contest. Winners will be announced on 11 October and an exhibition of the 100 award-winning shots will open at the Natural History Museum on 14 October. 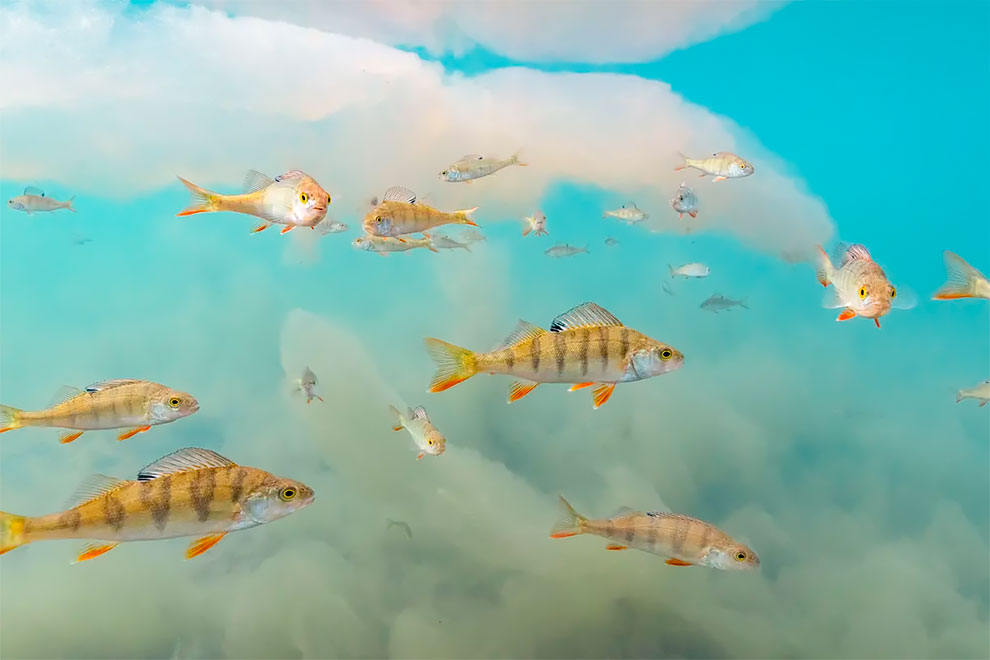 Törmänen was thrilled to meet a school of inquisitive European perch on her annual snorkel in Honkalampi lake. In the previous three years she had found only dead fish. She framed the fish flying through clouds of pink-tinged algae. Although it created a beautiful scene, excessive algal growth, a result of the changing climate and warming waters, can cause problems for aquatic wildlife as it uses up oxygen and blocks out sunlight. Photograph: Tiina Törmänen 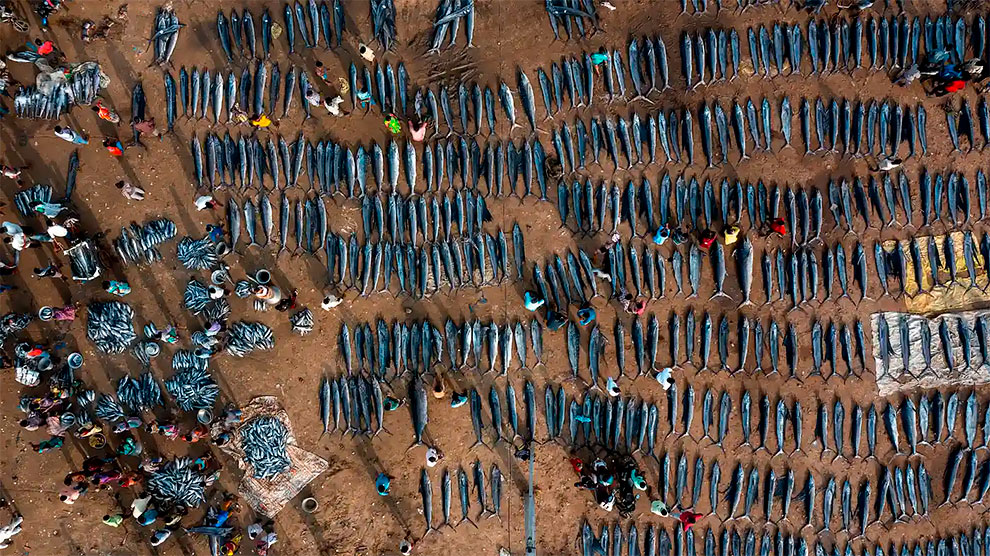 Mannepuri was shocked to see so many recently caught marlin and sailfish in a single place, in Kakinada, Andhra Pradesh. To demonstrate the scale of the fish market, he used a drone to get a bird’s-eye view. Globally, 85% of fish stocks are overexploited by humans. Photograph: Srikanth Mannepuri

Sloth dilemma, by Suzi Eszterhas, US 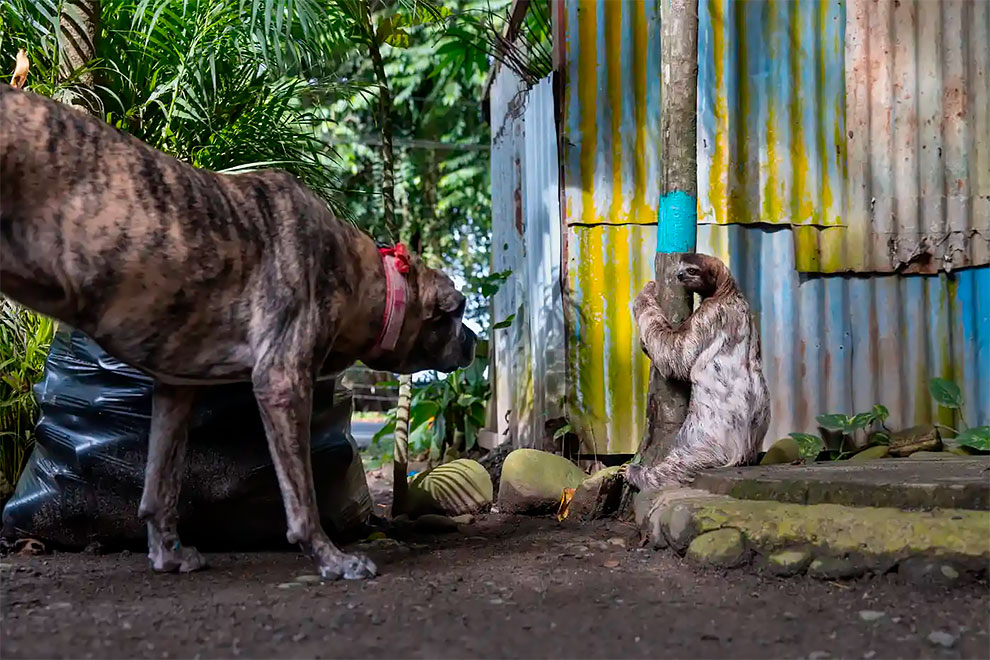 An encounter between a sloth and a dog in Puerto Viejo de Talamanca, Costa Rica. The brown-throated sloth was trying to reach a clump of trees when it met a big dog and froze. But the dog, having taken part in a training programme on sloth safety, simply sniffed at it. Sloths live in trees and rarely descend to the floor. With increasing habitat loss and the fragmentation of the forest, they are forced on perilous journeys across urbanised areas to find food, suitable habitats and mates. Photograph: Suzi Eszterhas 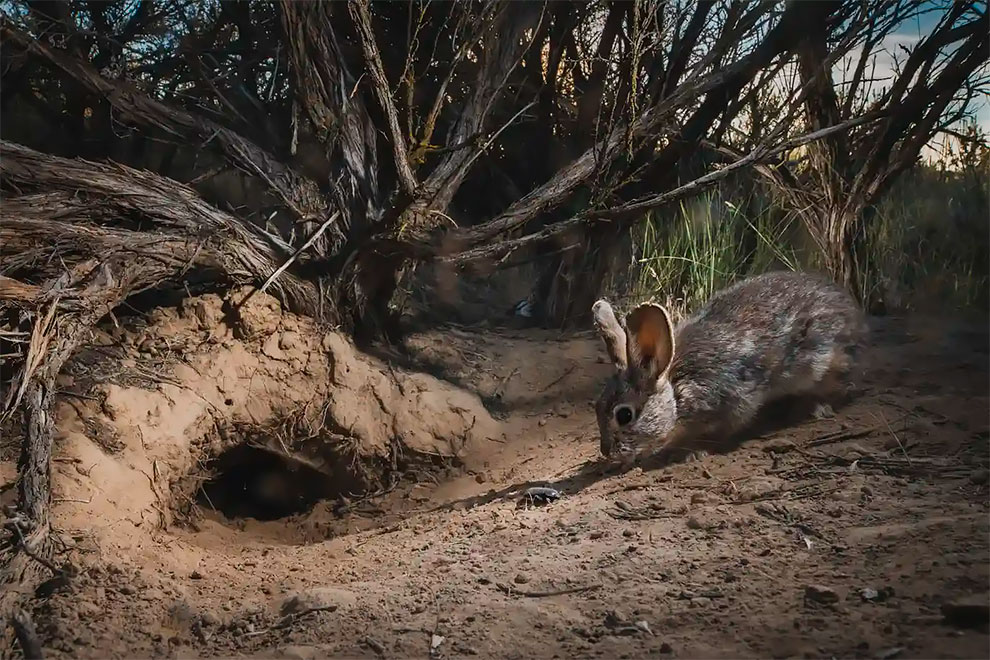 Heim set up camera traps by the active burrows of pygmy rabbits in the Columbia Basin in Washington state to observe their comings and goings. She was delighted by this moment of interaction as one of the rabbits sniffed at a stink beetle that had been sheltering in its burrow. Photograph: Morgan Heim 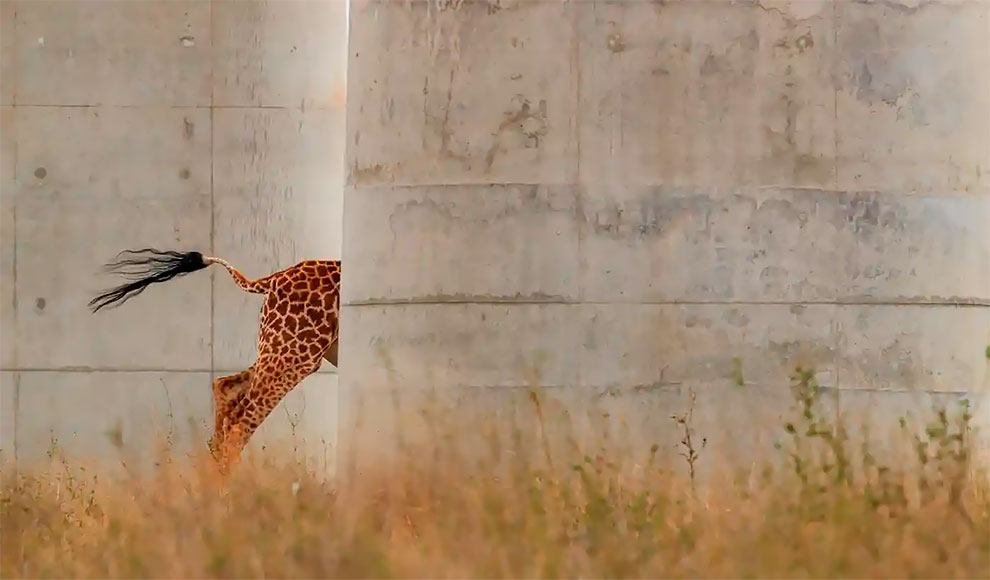 Fragozo captures the contrast between the natural world and human infrastructure. Here a giraffe is dwarfed by giant pillars of Kenya’s new Standard Gauge railway. Though this stretch of railway running through Nairobi national park is raised on giant columns, allowing animals access beneath, this picture is symbolic of how the space for wildlife continues to be squeezed. Photograph: Jose Fragozo 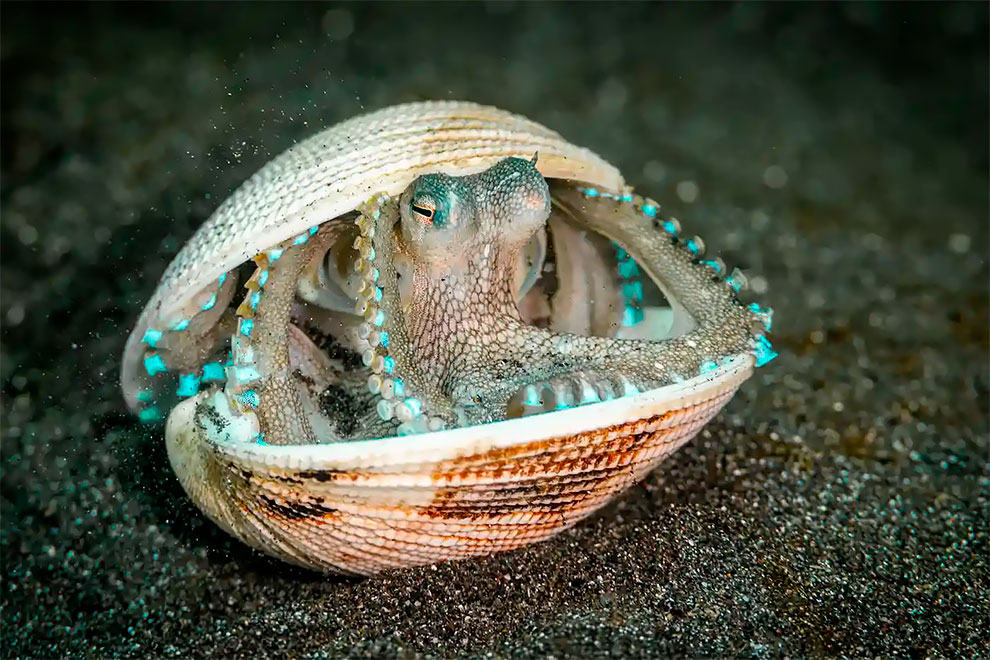 A coconut octopus peeks out from its clamshell shelter. Samuel was muck diving in Indonesia when he noticed this octopus. He lowered the power of his strobe lamp so as not to distress it. The octopus shut the lid of the shell when Samuel approached but then slowly reopened it, revealing colours and coils. Photograph: Samuel Sloss 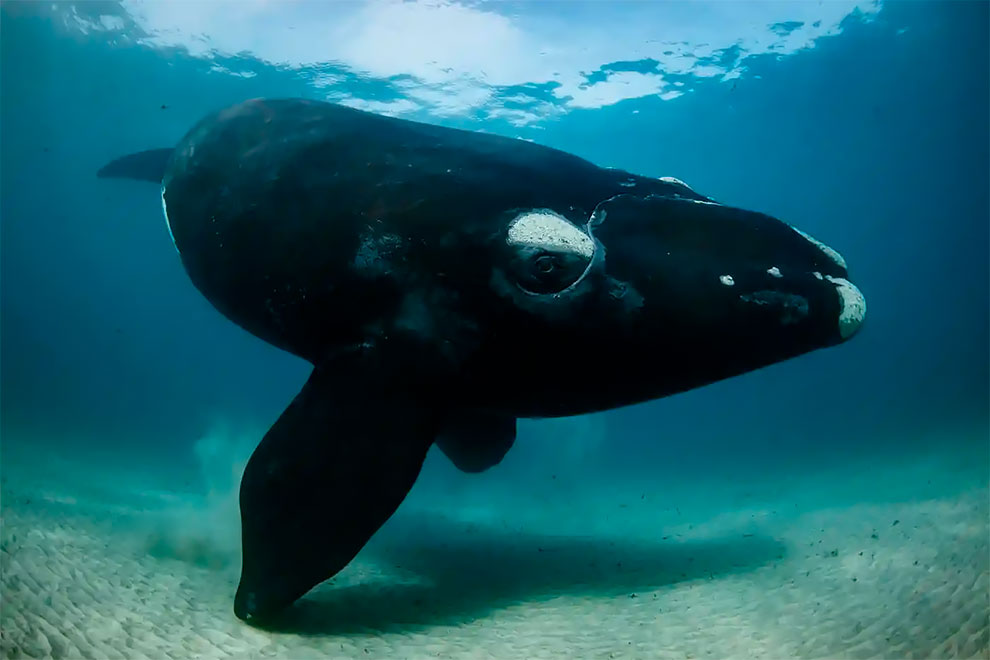 While the whale calf investigated him, Robinson’s main challenge was to swim far enough away to photograph it. The encounter in Port Ross lasted 30 minutes. New Zealand’s population of southern right whales, known as tohorā in Māori, were hunted to near extinction by European whalers in the 1800s and then by Soviet whalers in the 1900s. Now protected, the population has bounced back from a small group. including just 13 breeding females, to more than 2,000 individuals. Photograph: Richard Robinson

Life and death in fur farming, by Jo-Anne McArthur, Canada 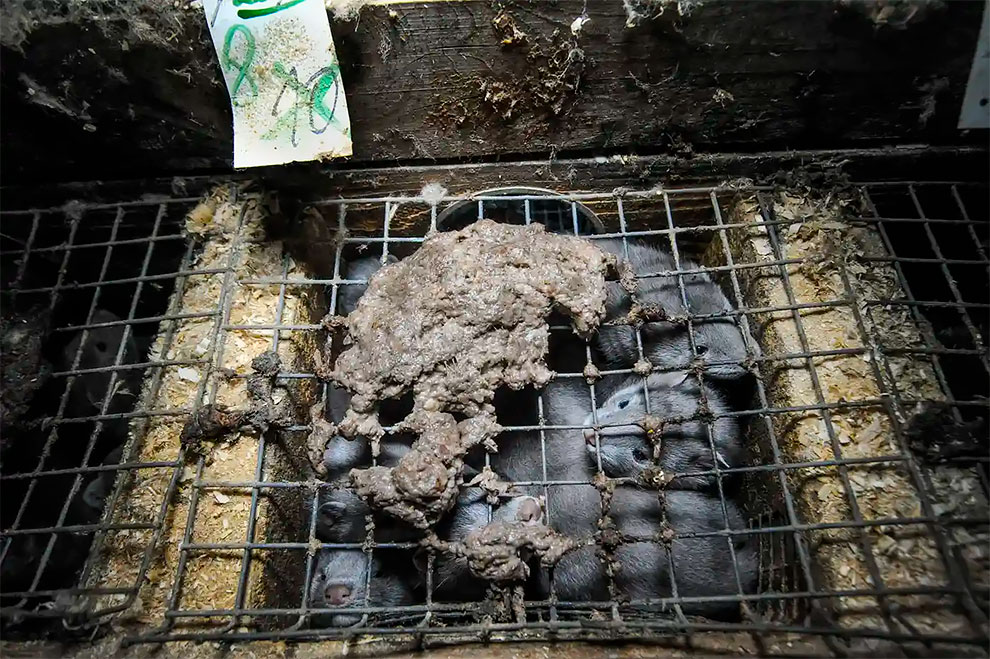 American mink kits fighting for space in a small cage on a fur farm in Lindåsen, Sweden. The sign above the cramped cage indicates two kits have died. As a result of legislative changes since this photo was taken, farms now have slightly larger cages, but the animals’ standard of life remains poor. Photograph: Jo-Anne McArthur 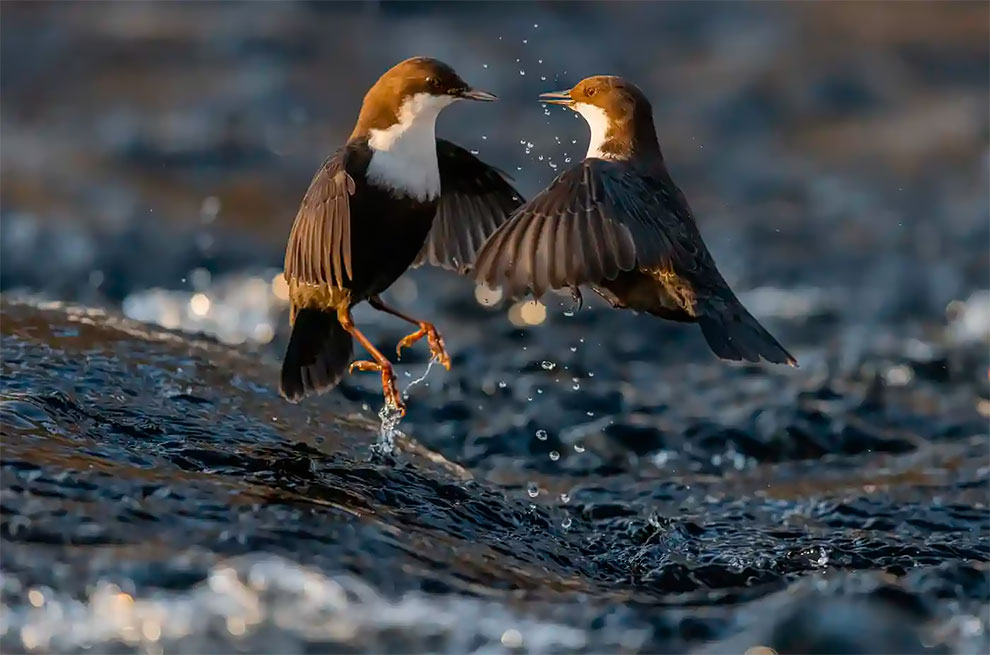 After years of visiting the river in Kuusamo, Nikki knew every ‘dipping’ rock favoured by white-throated dippers. Picking one hidden beneath flowing water, he sat quietly on the bank and captured this fleeting moment as two birds fought over prime position. Dippers use ‘dipping’ rocks as a launchpad to scout rivers before diving down to hunt mayfly and caddisfly larvae and small fish. Photograph: Heikki Nikki

The snow stag, by Joshua Cox, UK, 10 years and under category 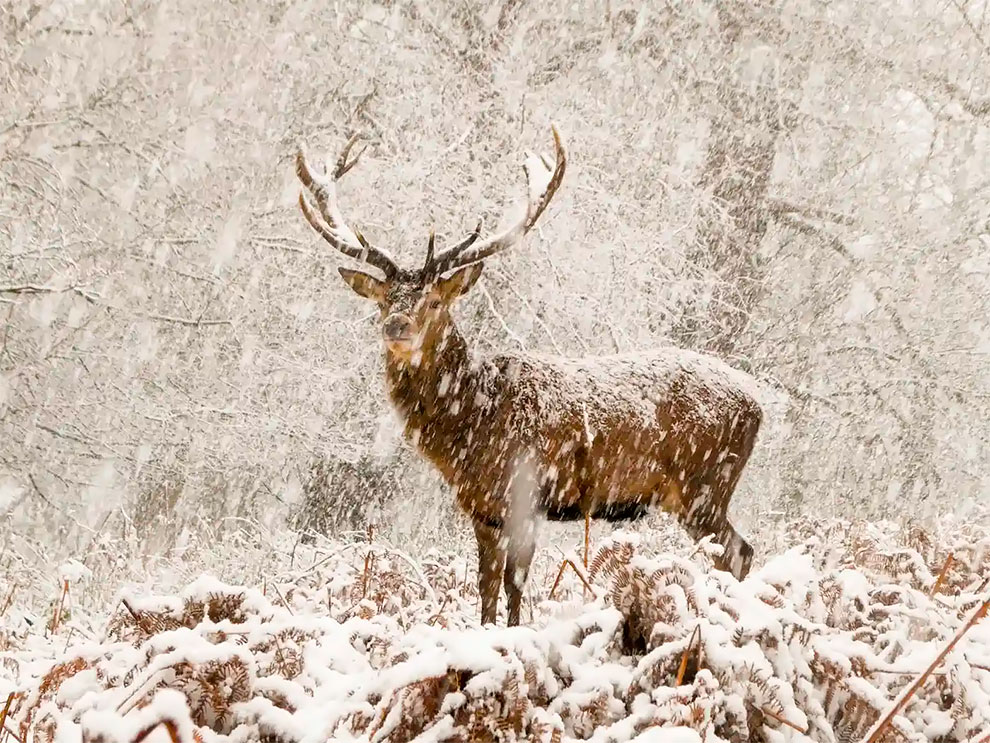 It had just started to snow when Joshua and his father arrived in Richmond Park, London. They followed the deer at a safe distance, and as the snow intensified one of the stags stopped. ‘He almost looked as if he was having a snow shower,’ says Joshua. Herds of red and fallow deer have been roaming the park freely since 1637. Photograph: Joshua Cox 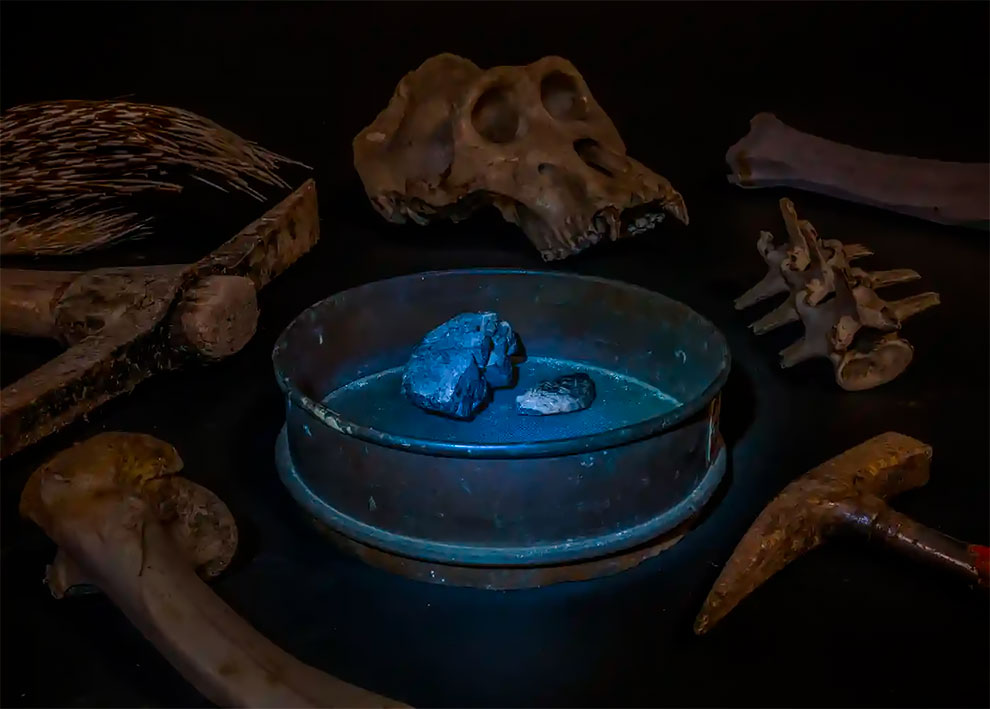 Glowing blue, coltan is a component of phone and laptop batteries. Here Jaschinski surrounds it with mining tools and the remains of animals affected by the industry, all seized by customs authorities: a gorilla skull, vertebrae and leg bone, and porcupine quills. Coltan is extracted from the riverbeds of the Democratic Republic of the Congo by poorly paid miners who hunt wild animals for food. Hunting and trading wildlife threatens the future of the country’s gorillas and has led to an increased risk of viruses jumping to humans. Photograph: Britta Jaschinski 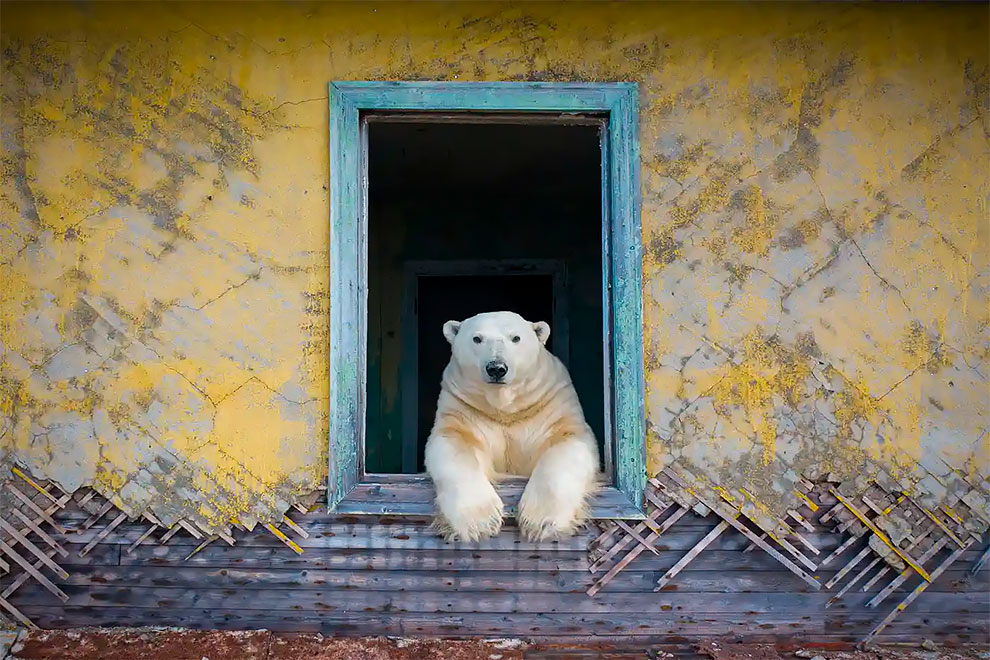 When Kokh’s boat approached the small island of Kolyuchin in the Russian High Arctic, which had been abandoned by humans since 1992, he was surprised to spot movement in one of the houses. Binoculars revealed polar bears – more than 20 in total – exploring the ghost town. Dmitry used a low-noise drone to document them. Photograph: Dmitry Kokh 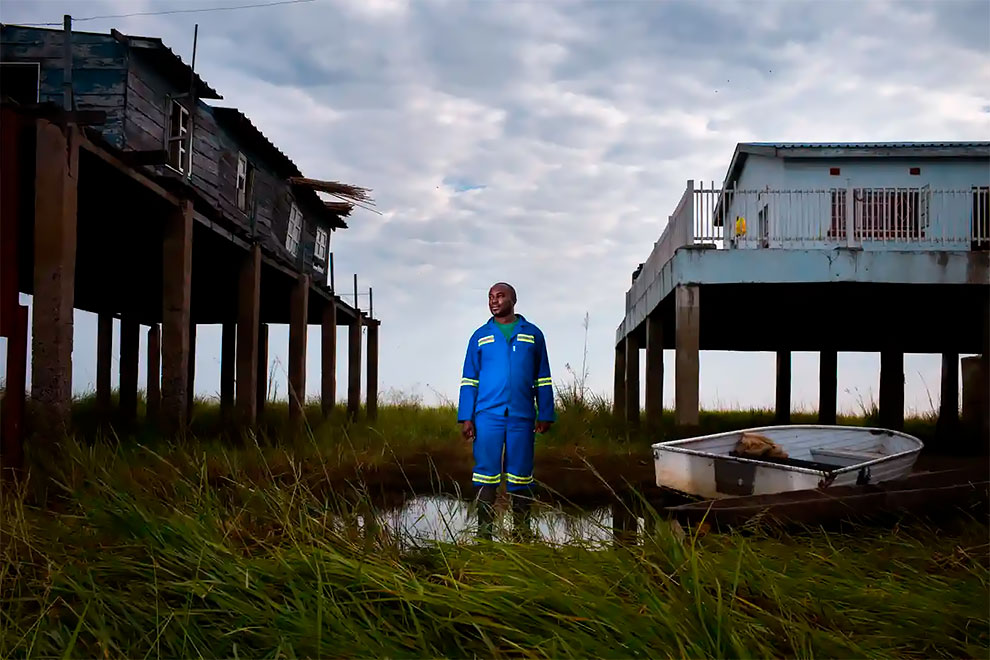 A portrait of Lubinda Lubinda, a station manager for the Zambezi River Authority in Zambia. Low water levels mean his new house (right) did not need to be built as high. The Barotse people of the floodplain are subject to more frequent droughts owing to climate change and deforestation. Photograph: Jasper Doest 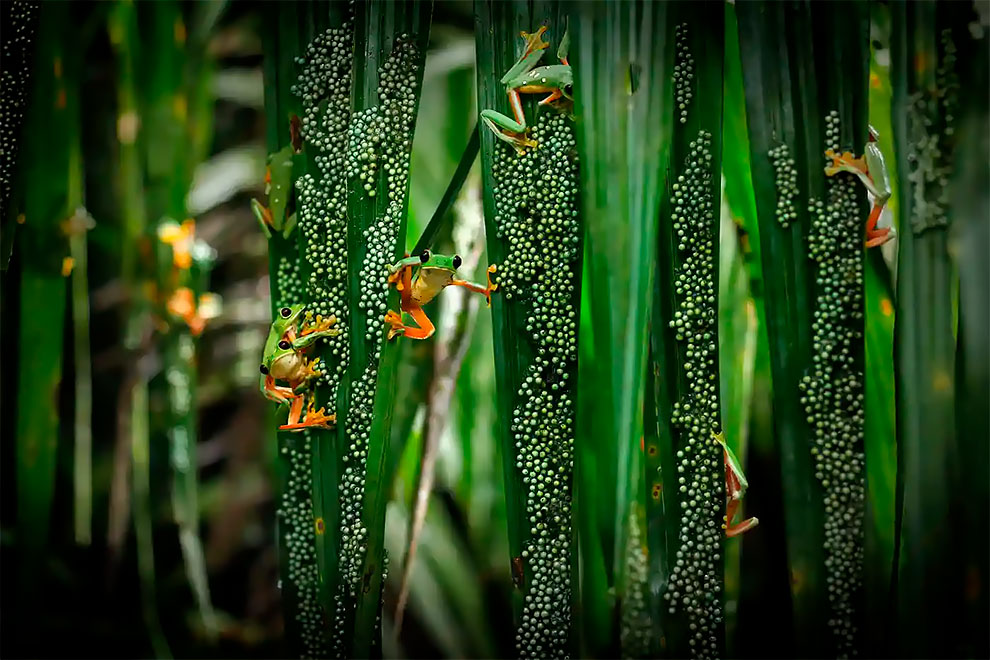 Güell waded chest-deep into murky water in the Osa peninsula where a gathering of male gliding treefrogs were calling. At dawn thousands of females arrived at the pool to mate and lay their eggs on overhanging palm fronds. Here, unmated males search for females to mate with. Photograph: Brandon Güell