following the unveiling of cable car designs for the cities of gothenburg and amsterdam, UNStudio has now been selected as the winner of a competition for the world’s first cross border cable car. the project, which will carry passengers between blagoveshchensk, russia and heihe, china, also involves the design of a terminal station on the russian side of the route. ‘as it crosses the natural border of the amur river, the blagoveshchensk – heihe cable car will be the first ever cable car system to join two countries and cultures,’ explains ben van berkel, founder and principal architect of UNStudio.

backed by strelka KB, the blagoveshchensk cable car comprises two lines and four cabins — each with a capacity of 60 passengers and extra space for luggage. journey time will be approximately seven and a half minutes, while actual travel time will be three and a half minutes. ‘cable car systems provide a new form of public transport that is sustainable, extremely fast, reliable and efficient,’ van berkel continues. ‘although primarily a pragmatic solution, cable cars are also a very congenial way to travel as they enable us to see and experience our cities in a whole new way.’ 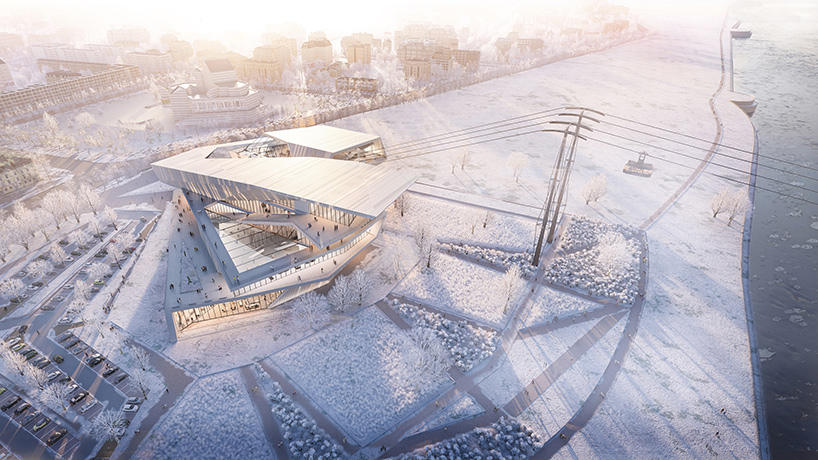 according to the design team,  the cable car terminal is designed as an expression of the historic connection between two cities of blagoveshchensk and heihe. since the mid-19th century, the amur river has defined the natural boundary between russia and china. however, when frozen over with thick ice, the river supports trade, commerce, and a variety of social connections. 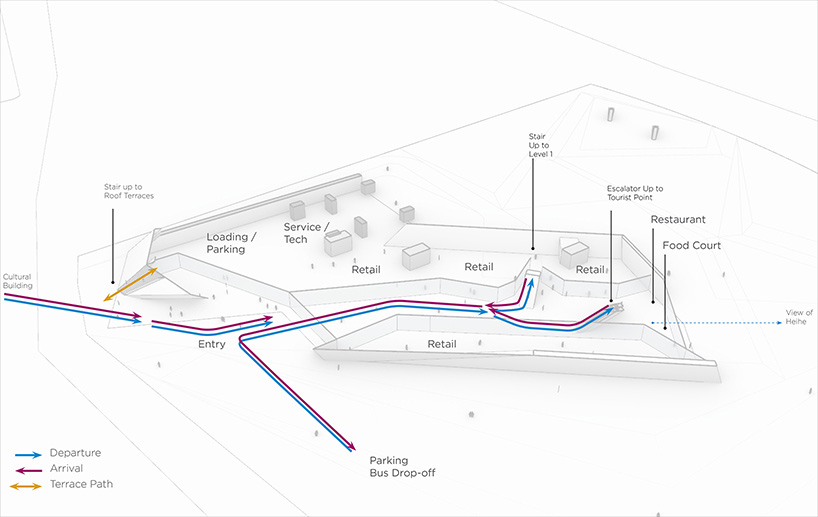 consequently, the river became an important reference point for UNStudio’s winning design. the building takes this historical connection as an inspiration for the organization of programs, materialization, spatial quality, and curated views of both cities. ‘much like the ice on the river, the building becomes an engine for creating social connections between two cultures and a beacon for a joint prosperous future between the two nations,’ explains the design team. 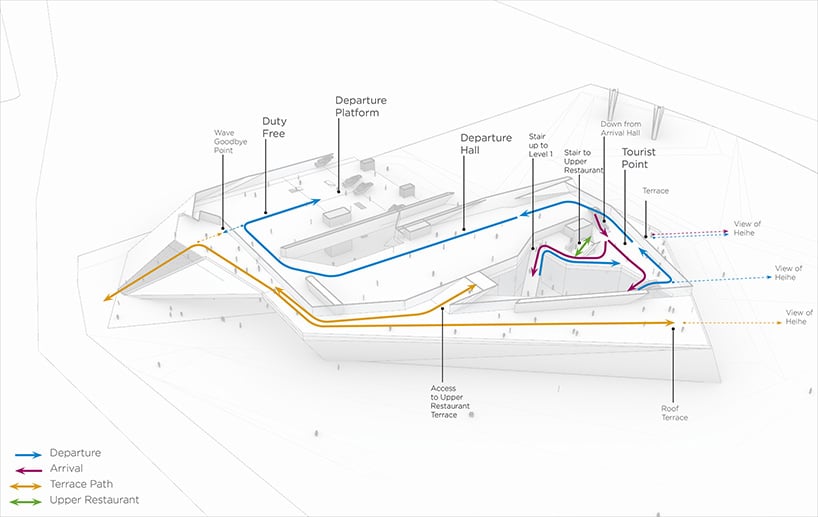 the terminal building features an elevated viewing platform over the river towards heihe, while the arrival platform frames views of blagoveshchensk. meanwhile, by offsetting the terminal from the existing boulevard along the river, a welcoming space is created for visitors from heihe and connections are established between the new natural starting point of the golden mile — a long stretch of golden sand along the river — and the green plateaus of the terminal. 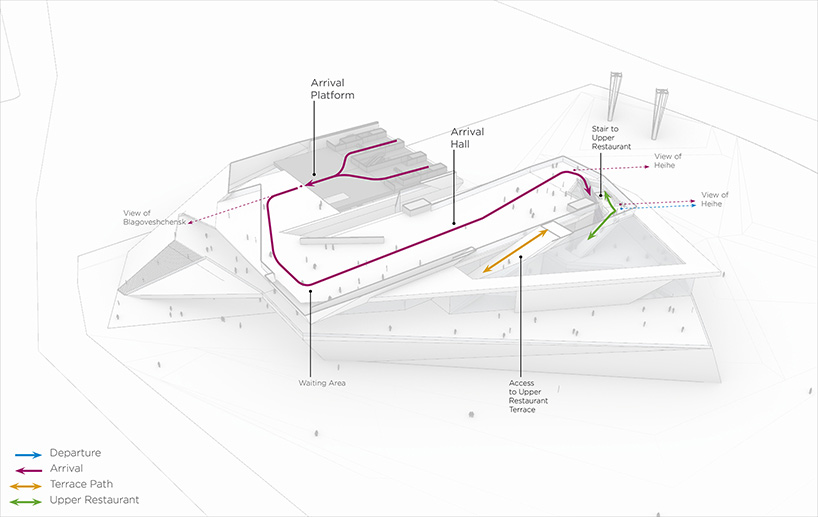 described as an ‘urban tribune’, the scheme links to the existing blagoveshchensk cultural center on the other side of the esplanade. this newly proposed square forms a cultural focal point for the russian city, connecting it to the river with a new space for events and performances. simultaneously, a pedestrian connection that passes through connects the cultural square with the golden mile alongside the river. 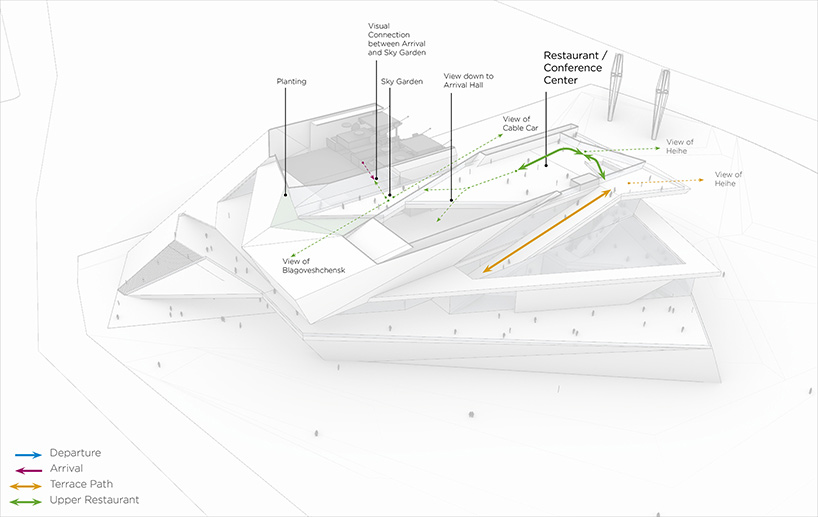 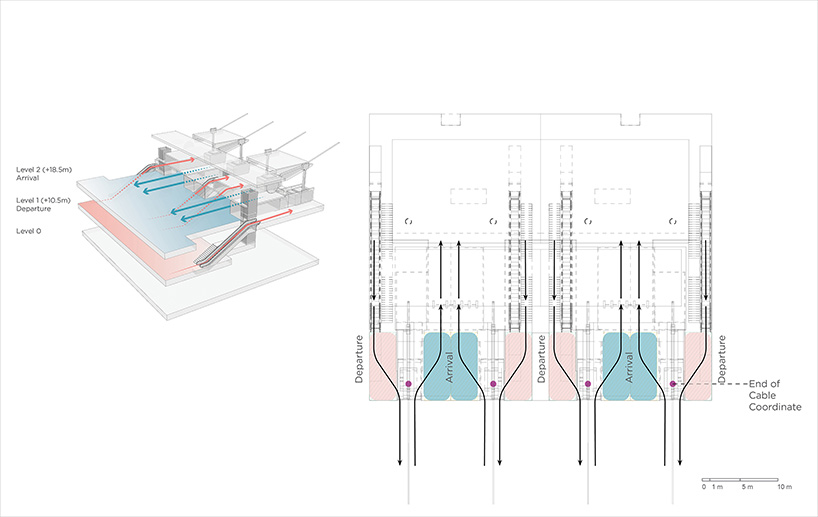